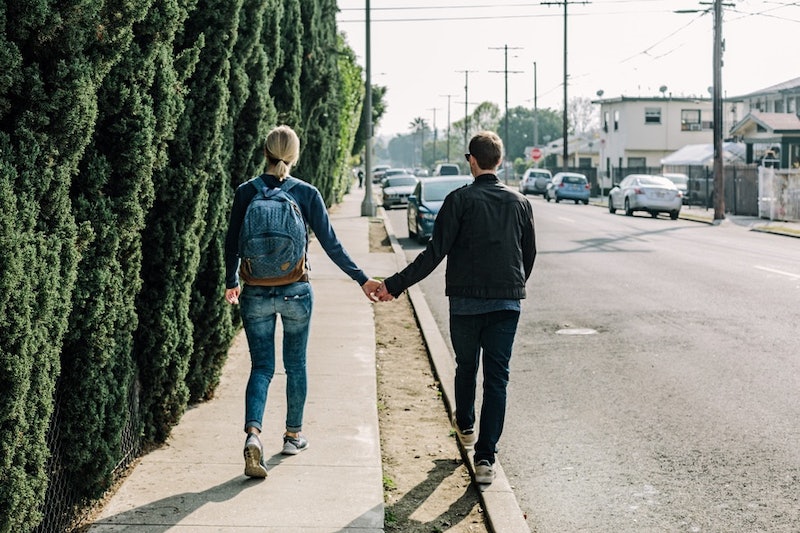 If you're currently wrapped up in the dating scene, then you may find your head swirling with questions about dating rules, and whether or not you're using the right dating etiquette. After all, the list of dos and don'ts in dating is a mile long, and it seems everyone has an opinion.

Because of this, we all have the rules heavily engrained in our minds. We follow them stringently, and hope for the perfect scenario where everything plays out swimmingly. Picture it: You wear your designated, best friend-approved date night dress, you save the first kiss for date number three, and you hold out until the perfect evening (several weeks in) before hooking up. It all culminates in the wedding date of your dreams, and you both live happily ever after.

Unfortunately, however, life doesn't always work this way. Kissing on the third date works for some people, while others can barely make it through the first night. So your best bet is to stick to the traditions (they're there for a reason), while peppering in some new rules of your own. "Trial and error is always a good strategy," says Laurel Steinberg, PHD, New York-based therapist & relationship expert and adjunct professor of Psychology at Columbia University, in an email to Bustle. "But I first recommend that people consider what they want to feel after a date, and what behaviors might encourage the development of those feelings."

The point is, if you follow the so-called (and often lame) rules too strongly, you may end up missing out, feeling bad, or even screwing things up. Dating etiquette can get dated (ha), after all. So don't be afraid to create some of your own. Below are some signs it may time to do just that.

Check Out: Not Your Mother's Dating Rules: The New Rules for Dating , $10, Amazon

1. You're Exhausted From Playing Games

There's something fun about playing hard to get. Not responding to texts right away, putting off a first kiss, not being available every single night — it's age-old advice, as well as part of what makes dating fun. But it can turn into a sort of psychological game, according to Christopher Hudspeth on ThoughtCatalog.com, and one that can sometimes backfire. So if you feel like you're going overboard with the over-thinking, put a stop to it. It may be much better to toss the rules to the wind, go with your gut, and do whatever feels best.

2. You Have Voices Echoing In Your Head

People have turned to their friends for dating advice since the dawn of time, and of course, sometimes our BFFs and roommates have valid suggestions. But good luck once you're on a date, and find yourself sifting through a messy amalgam of advice. To kiss on the first date, not to kiss — it can all get overwhelming, and cause you to come off as totally overwhelmed. To put a stop to the madness, come up with your own dating rules. Just do you, and it'll be more likely to work out.

3. You Wait Around For Someone To Ask You Out

You may have in your head that someone else has to ask you out for it to be a worthwhile date. After all, it's tradition, and maybe even the polite (read: non-desperate) thing to do. Right? Nope. There's absolutely nothing "desperate" about going up to someone and asking them out. As Alexia LaFata said on EliteDaily.com, "This kind of confidence is sexy in an I-know-what-I-want-and-it’s-you kind of way, and it’ll make you feel more attractive for having felt this way toward somebody and acting on it." So just do it.

4. You're Constantly Questioning Your Feelings

There are dating rules that clearly forbid over-sharing with someone you just met. And others still that insist you can't fall in love on a first date. Well, you can, to all of the above. If you believe in the rules too hard, you may be accidentally sabotaging your dating life by constantly calling your feelings into question. If you feel it, you feel it. Don't let "rules" undermine your emotions, or cause you to second guess.

5. You Leave With A Sense Of Regret

I hope that you leave a date feeling like things went well, and that you accurately portrayed your awesomeness. But that's obviously not always the case. "If a person is feeling regret after a date, that’s usually a signal of poor dating etiquette," Steinberg says. Maybe you kept quiet on an issue that means a lot to you, in an effort to be "polite." Or you dodged a kiss, because it felt like the right thing to do. A sense of regret is a sign that you followed an old school rule that isn't working, and it may be time to change things up.

6. You Feel Bad When He Or She Pays

Ah yes, the tricky situation of who will pick up the check for dinner. Traditionally, the man is expected to whip out his wallet. And yet this doesn't exactly sit well with many ladies these days. And why should it? I personally like to pay half, or if I did the inviting, then I'll pay for it all. That's my rule, but yours can be whatever you want. Figure out what makes you feel most comfortable, and stick to that.

Unless you're all signed up for a monogamous relationship, then you shouldn't feel bad about playing the dating field. Not only are you totally allowed, but it's even a good idea. Going on multiple dates ups your chances of finding someone awesome, and it also helps relieve some of that first-date pressure, according to Aaron Horton on Glamour. So go ahead and "talk to" or "hang out" or "hook up" with multiple people a week, enjoy yourself, and definitely don't feel bad. Do whatever feels best and healthiest for you.

8. You Find Yourself Bored On First Dates

We all have engrained in our minds the traditional first date ideas — movie, coffee, drink at a bar. Sure, these are all good places to hang out, maybe do a little surreptitious handholding, and get to know another person. But, since they are so darn traditional, these locales can also be kind of boring. When you're feeling bored, you may give off bored, disinterested vibes. That's why it's so important to keep things fun, and go on dates that really express who you are.

9. You Hold Back In Conversations

When it comes to dating, we're all told to resist the urge to over-share. This includes talking about exes, revealing any and all baggage, admitting gross tidbits of info — you get the idea. And yet, I'm of the opinion that if it comes up, you can talk about it. The thing to keep in mind, however, is timing, according to dating experts Melanie Gorman and Pat Love on YourTango.com. This means not leading with the topic, but allowing it to come up organically, and simply being honest. It's much better than lying, or holding it all in, which is always 100 percent obvious.

10. Things Never Seem To Work Out

While there are obviously greater issues on this planet, there is no denying how bad it hurts to be passed up for a second date. But don't take it too personally. The inability to keep anyone around, according to Steinberg, could simply be a sign you're reading out of the wrong dating etiquette book. It could also be due to something like poor conversation skills, which can be an easy fix. Don't be afraid to speak your mind, and get chatty. You'll likely have much more success.

11. You Don't Allow Yourself To Hook Up

Perhaps of all the dating rules, when to have sex can be the trickiest of them all. Of course, the decision is always up to you, but if you're both feeling it, don't put off the inevitable for the sake of some nonexistent rulebook. "When sexual tension builds, you're likely to become more awkward and over-analytical about why it's not happening," said Laura Argintar on EliteDaily.com. Save yourself the drama, and do whatever feels right to you.

12. You Over-think Your First Date Outfit

Open up any magazine ever, and you'll most likely see tips for dressing up for a first date. That's because it's totally fun to choose your look, and to get a bit fancy for the evening. And yet, doing so is not a hard and fast rule. If you hate the idea of stilettos, or can't picture yourself in dress, then simply wear whatever you want. You'll feel more like yourself, and will have better luck meeting someone who appreciates the real you.

13. You Feel Like You Have To Be Overly Polite

We all go into dates with manners and propriety at the top of our minds, and yet giving into your desires to eat an entire pizza can be quite the charming quality. So do whatever you want on a first date, and definitely be yourself. The right person will totally appreciate it.

And that's what dating is all about, anyway — finding someone who appreciates you for you. Take the rules into account if it makes meeting new people easier, but sometimes it's much better to march out into the dating world without any hinderances. Toss away the rulebook, and just do you.