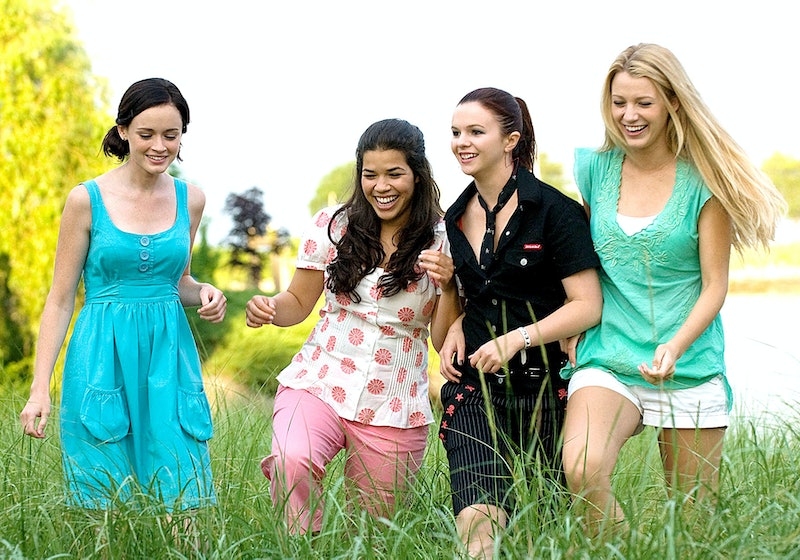 For all those Sisterhood Of The Traveling Pants fans out there, it seems like the four women will don those pants once again. And, when they finally do, Blake Lively hints the new Sisterhood move won't be for teens. She told Entertainment Weekly Radio that when she first played the complicated athlete Bridget in the first film from way back in 2005, Lively was 16 years old, and she was fittingly playing a 16 year old. Now, at 28, she believes that the third movie needs focus on these characters now that they've grown up. “We wouldn’t be making a movie for 16 year olds again,” Lively explained. “We would be making a movie trusting that our audience grew up with us. I think that would be really interesting to explore.”

The actress believes this new movie would have to "honor the story and the legacy,” which is one of honest female storytelling, even if some of the scenes could be laughable now. Re-watching and re-assessing the Sisterhood Of The Traveling Pants in 2016, it's hard not to laugh at some of the melodrama, the Red Hot Chili Peppers interludes, or the fact that somehow these pants just magically fit four women of varying sizes. But it's also hard not to feel nostalgic about the way the movies tackled difficult topics like death, grief, suicide, and unplanned pregnancy for girls that were dealing with the same issues. These movies were all about growing up female and should stay true to this focus of growth and how we do so with the people we love.

The third installment shouldn't be fan servicing, but a chance to tackle the difficult topics that affect women in their late 20s, early 30s. To tackle female friendship in a way that is honest and maybe perhaps is taken from the four actresses' own lives, especially since they have been friends throughout the making of the movies and in the years after. Just check out Amber Tamblyn's Instagram to see how much these four women really care about one another.

A new movie allows fans to see how Sisterhood Of The Traveling Pants would change if it happened today. Or, even better, what kind of female friendship movie the women could make at a time when female moviegoers are yearning for smart, strong female characters. The Sisterhood Of The Traveling Pants was one of the few movies that was carrying the torch for female friendship movies. They showed that growing up sometimes means growing apart, a sad but true fact that most other movies didn't show — or, when they did, they were emotionally weak. Women want to see their stories told, and to be able to check back in with these women who we watched mature. This new installment could allow for a movie that defines what it is to be a woman and to be a friend.

The actresses should think of this a chance to make the Thelma & Louise of the aughts, perhaps without all the driving off the cliff. Or the Before series with Ethan Hawke and Julie Delpy, which looks at relationships in a way that seems honest, almost too much so. This could be a female buddy movie that respects its viewers and wants to tell a story that hasn't been told, a complicated look at female friendship that doesn't have viewers taking sides, but seeing themselves and their own experiences playing out between these four women.

Last year, America Ferrera (aka Carmen) told People that something was "very much in the works" and even hinted that the Ann Brashares series, which the previous two films were based on, would play a role in this latest movie. "There's a fifth book," Ferrera said, "and what's wonderful about it is, and the series to begin with, is that it's really raw and honest about friendship and how hard it can be and how it changes as you grow up."

Ferrera is talking about the last book in the series, Sisterhood Everlasting, which has Carmen, Tibby, Bridget, and Lena reuniting a decade after the fourth book in which their lives are totally different and for the most part separate. For those who haven't read the 2011 book, it's safe to say a lot of things happen, most of which would make a movie version very sad and perhaps would play into the female friendship movie tropes a little too much. But the message of the book is that friendships change throughout our lives. That doesn't mean they're over; it's just a part of life.

Female-driven movies are so focused on those teen coming of age years that adult women don't seem to get their stories told. At least, not ones that focus on friendship. As women get older, their stories revolve around finding love, with their friends playing mere supporting roles in their quest to find prince charming. The Sisterhood movies did focus on love (please, please hope that Lena is finally over Kostas), but friendship was always the main theme.

I can't imagine that friendship wouldn't be the main objective in a new movie that has them all grown up and still figuring things out. That's something most movies don't tell you either, that, after high school and college, you aren't just fully formed and ready for life. You still struggle. Showing four women in that stage of their life sounds important and exciting — like something you may want to have a pair of magical pants and some very close friends around to get through.