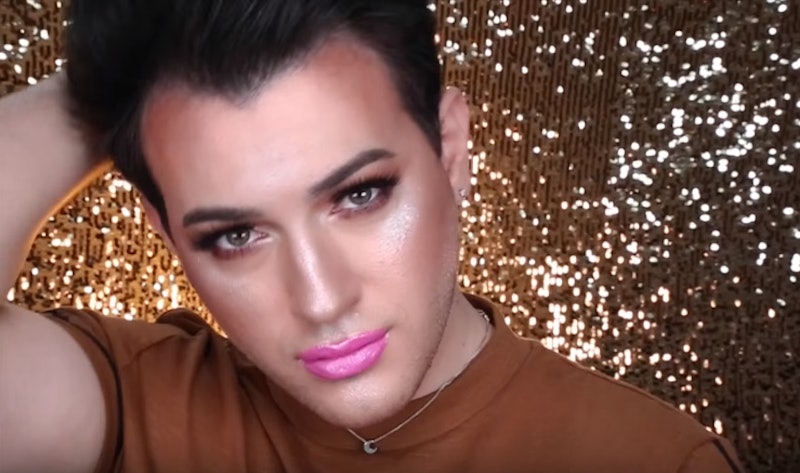 Makeup artistry is a practice that we should be able to appreciate from folks of any sexuality, any race, any size, and any gender. Male makeup YouTubers, for example, are some of the best MUAs on the video-sharing platform. I mean, the first name that comes to my mind when thinking of any beauty vlogger is Jeffree Star, and I'm comfortable in the knowledge that I will never be as skilled as the androgynous makeup guru. Nor will I ever have my own hugely popular beauty line. I've come to terms with that, too.

What I adore about makeup is that it's accessible to anyone, on any budget or otherwise. Through YouTube, everyone with an internet connection can check out the wonders of makeup as well. Personally, I don't know that I ever would've learned to get my eyebrows on point without the guidance of a million makeup tutorial videos. And how would we know what palettes to buy without a million reviews from 100 different vlogging personalities?

We truly live in an era in which the internet can help us in any aspect of our lives. Not only do we get to learn from these male beauty vloggers, but we can help support and celebrate the men who aren't ashamed to embrace and share what they love. Here are 15 glorious guys to check out ASAP.

Giving guys and gals and anyone in between professional advice for their makeup routines, Jordan Liberty is an actual makeup artist here to go through everything from the basics all the way to the most intricate full face looks.

Patrick Starrr lives by the motto "MAKEUP IS A ONE SIZE FITS ALL," and a truer tagline has never been spoken. His high glam looks combined with a brilliantly bubbly personality make his makeup tutorials some of the most loved online.

You may know him as the kid who danced to Lady Gaga on the news, but Brendan Jordan is so much more than a hilarious YouTube personality with major vogueing skills. He's an excellent makeup vlogger, too.

Marc Zapanta updates his channel every Sunday with absolutely stunning makeup looks, both in and out of drag.

This self-taught Canadian beauty began posting videos on YouTube five years ago and hasn't stopped since. As well as producing his own makeup looks, Jean Francois recreates popular celebrity looks just as often.

This British 16-year-old posts reviews and tutorials on the regular and is proving himself to be an inspiration to any uncertain or insecure teen (or 20-something). Being true to yourself has never been so fulfilling.

Another professional makeup artist sharing their tips and tricks to the world via the biggest internet video site, this vlogger doesn't just do tutorials on their own face, but often brings in all different types of people to show how to do makeup on various skin types.

Wayne Goss has 15 years of experience in the makeup industry, but don't worry: He won't be making anything too complicated. Not only does this YouTuber create standard tutorial vids, but Goss creates videos explaining specific techniques so that anyone can understand them.

Arabia Felix helps you feel your fantasy literally, by making makeup tutorials based on anything from Disney characters to deities. Felix is perfect for all your costume party needs. But fret not: He also has some more traditional looks for you to try out at home. He may not update often, but when he does, it's gold.

More commonly known as Manny MUA, this male makeup artist has over 1 million subscribers for a reason. This artist believes that "makeup is GENDERLESS" and he proves it with his killer tutorials that can be applied to anyone and everyone. He has even released his own palette with Makeup Geek, which is just to die for.

As well as being hilarious on Vine, Bretman Rock has some devastatingly beautiful makeup tutorials on his YouTube channel, slotted seamlessly between his vlogs and lifestyle vids.

You didn't think I was going to leave him out, did you? I've been following Jeffree Star since his music video, MySpace fame days, and honestly, I'm so glad he's become as successful as he is. Star's feminine look and fearless attitude are inspirational. Plus, he's totally hilarious and his makeup line, Jeffree Star Cosmetics, is wildly popular. Why wouldn't you want to learn from the best?

Having perfected the "natural" look of makeup, Jake-Jamie Ward (aka The Beauty Boy) shows us the best ways to highlight our natural beauty and make it seem like we're not wearing any makeup at all.

What would this list be without some RuPaul's Drag Race alumni? Miss Fame is so good at makeup that she's toured America giving makeup demonstration shows. But if you can't afford a ticket, or she's simply not coming to a town near you, this queen has some outrageously beautiful tutorials available on her YouTube channel.

This YouTuber may only have five videos currently on his channel, but his tutorials are fierce and easy to follow. It's worth a subscription to make sure you see when and what he updates the page with next.

If you haven't noticed by now, what these men have in common is their gender and their passion for beauty. But the looks they produce are diverse and their personalities couldn't be more unique. In knowing as much, I find plenty of inspiration to stay true to who I am.