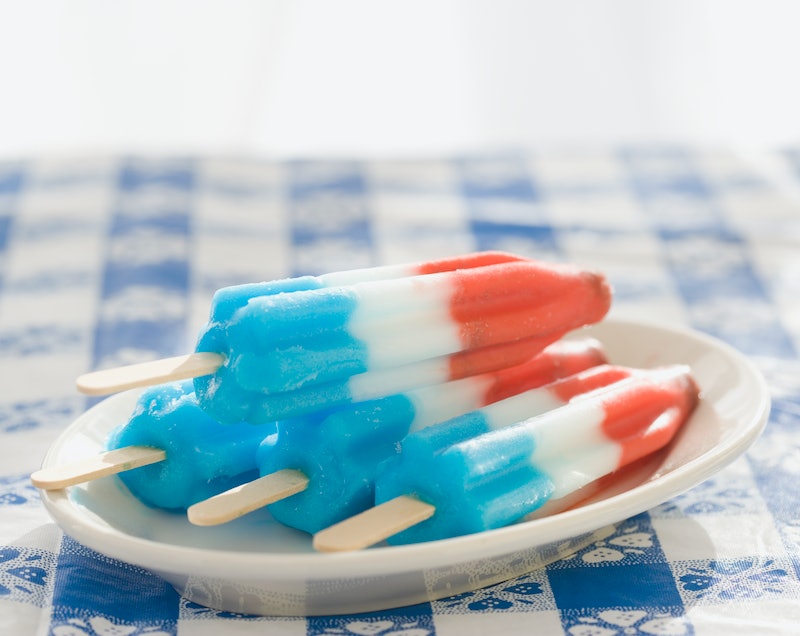 The Fourth of July never gets old. I celebrate every year with friends — delicious food (ahhhh, the sweet, smokey smell of barbecue), good booze, and one heck of a view of fireworks all around the gorgeous city of Las Vegas. And some of it, for the nostalgia-lovers in the bunch, is definitely reminiscent of the things every '90s kid did on the Fourth of July — minus the alcohol, obvs. But back in the '90s, as it is today, it was a day to celebrate, regardless. The holiday captured the true feeling of summer — the warm air, the ice cream treats, and being able to play outside late because you didn't have to go to school the next day. That was the life.

It's been a hot minute, but I still remember the Fourth of July as a kid. I grew up in the Great Lakes State (Michigan, for those not in the know), and every year, people would drive to the neighboring state of Ohio to get the fireworks that were illegal where we lived. Then we'd all watch in awe as they exploded into the sky, mesmerized by the vibrant colors and waiting for the cops to show up. Ah, memories.

And despite waking up the following morning with about 400 mosquito bites, there was always a bit of lingering sadness that the night was over. Nothing is magical to children quite like things you set on fire and let blow up near the house. And that's not all that made the Fourth of July so special; these things, for example? I've never forgotten them, and I'm willing to bet that you haven't, either.

You always hated how your parents made you stay in the garage as all the big firecrackers exploded on the driveway. Then they'd give you bang snaps — those wimpy little baby firecrackers that looked like rolled up gum wrappers. You were all Debbie Downer until you threw them and they made a cool popping sound when they hit the ground, and then you weren't mad anymore. Plus, you got to play with sparklers, and those things were the bomb.

2. Played An Adrenaline-Pumping Game Of Splash Out

If adults don't think kids experience anxiety, they've clearly never played a game of Splash Out, where you pass around a ball with a water balloon inside. The goal is to not be holding the ball when its timer goes off and the balloon explodes. So. Much. Pressure.

3. Made (And Devoured) S'mores By A Campfire

The only kind of sandwich you wanted to eat on the Fourth of July.

4. Played Marco Polo In The Dark

Nothing amped up an already heated game of Marco Polo quite like playing it in the dark. You'd follow the sounds of your friends splashing in the pool and hope you didn't stray too far into the deep end.

5. Cooled Down With Ice Pops

So tasty, so fruity, so refreshing... but they always cut the corners of your mouth, and HOLY COW, did that hurt.

6. Captured The Night With Your Disposable Camera

You could never quite capture the magic of fireworks, so you instead ended up with 43 pictures of pure blackness — plus one that your mom snuck in of her red, white, and blue Jell-O cake.

7. Caught Fireflies With Your Bare Hands

I know this one might depend on where you grew up; but in the Midwest, we were all about catching fireflies and then sticking them in jars, even though that... sort of... killed them... uh... whoops.

8. Listened To All The Best Summer Jams

9. Had A Blast At Neighborhood Parties

You'd all come together and house-hop, enjoying barbecued hot dogs and hamburgers, massive Slip 'n Slide competitions, and the overwhelming smell of sunscreen and Sun In.