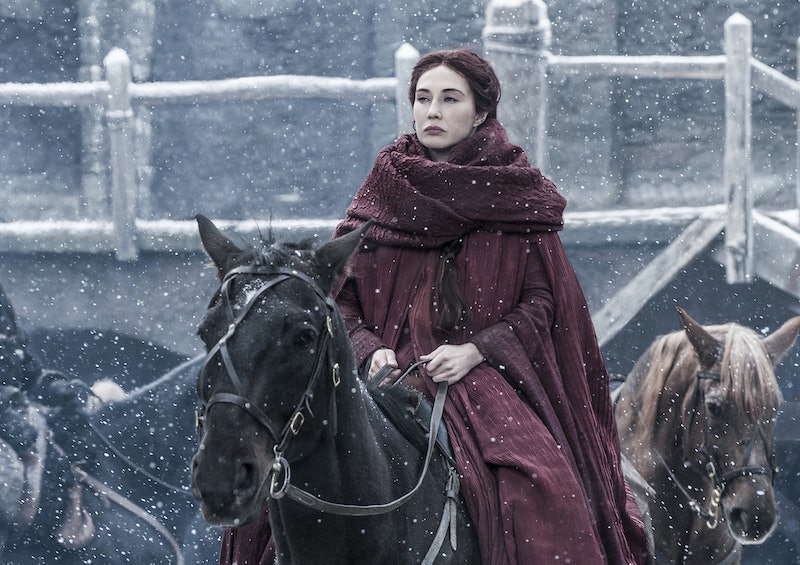 While the show tried to distract viewers from wondering where Melisandre is going on Game of Thrones by having Jon being proclaimed the King of the North (not to mention that freakin' parentage reveal) during the Season 6 finale, I cannot ignore the fact that the Red Priestess was banished from Winterfell. She was shown riding off toward the South on her horse during "The Winds of Winter," with the series giving no indication where she is headed. However, now that Melisandre has been sent away from Winterfell, I'm fairly confident that Melisandre must meet up with the red priest Thoros of Myr, his resurrected buddy Beric Dondarrion, and their newly acquired traveling companion the Hound in Season 7. Better get started on that Hound and Melisandre fan fiction STAT.

Although I have been hating on Melisandre for seasons, I did not want Davos to kill Melisandre when he discovered that she was guilty of burning Shireen to death. She has become quite helpful when it comes to the leadership of Jon Snow (err, I mean, Jon Targaryen!!), but the murder of a child could not go unpunished in the Stark's Winterfell. (Ramsay's Winterfell would have been quite a different story.) Of course, the wise and patient Jon did not allow the woman who brought him back to life to be killed by Davos, but he did satisfy his new advisor by sending the Red Woman away. Unfortunately, with her exile comes the restriction of never being able to return to the North, which is not good since her Lord of the Light-granted powers would come particularly in handy when the White Walkers inevitably breach the Wall.

Just because Jon and Davos never want to see Melisandre again, doesn't mean Game of Thrones fans feel the same way. While I'm not certain how connected the priests and priestesses of the Lord of the Light are, I feel like these magical servants must have some sort of network, which is why she should encounter Thoros in Season 7 — whether by plan or by accident. Melisandre has only been seen in the context of serving Stannis Baratheon, and then Jon Snow, so I am unsure who else she even knows in Westeros, but considering Melisandre is actually a gazillion years old, this ancient witch has to have some other friends out there in the world, right? And even if she's never heard of Thoros before, to stumble upon some Lord of the Light believers would be a huge relief for Melisandre after hanging with the non-believing Davos for five seasons. (Love you, Davos, but you are a stick in the mud.)

Melisandre joining up with Thoros, Beric, and the Hound sounds like the premise of a very excellent and twisted sitcommy spin-off (I'm pitching Three Men & A Priestess if HBO wants it), but if she does meet them on the road from Winterfell, they'd have some serious business to take care of. Thoros and Beric returned to the TV series when they reunited with the Hound and recruited him to help them stop the "cold winds" that are "rising in the North" — aka, the White Walkers. This is definitely a purpose that Melisandre would support since she told Jon how she'd be able to help him win the war against the army of the dead. So this foursome could be essential in stopping the Night King with both Thoros and Melisandre having the power to perform resurrections, courtesy of the Lord of the Light.

The only downside of Melisandre meeting up with Thoros would be that she would have to stay in the North, which Jon strictly prohibited. But, how could he hang Melisandre if she's only in the North to help fight the White Walkers? Well, Jon might end up giving her a break, but Davos definitely wouldn't. Davos would absolutely attempt to kill Melisandre if he met her again, but I'm not certain he could succeed, so it's best for now if these two stay away from each other.

Melisandre could end up not joining Beric, Thoros, and the Hound, but it's almost too perfect of a setup for them not to encounter each other. However, if she does heed Jon Snow's order to permanently leave the North, Season 6 showed there is another Lord of the Light priestess in Meereen, who backs Daenerys. Melisandre could travel to King's Landing, where Daenerys is going, to help the Mother of Dragons succeed. Yet, Melisandre seems pretty devoted to Jon Snow (she does love her men) and her powers would be put to better use in fighting White Walkers. But no matter where Melisandre is going, I agree with her that the Lord of the Light isn't done with her just yet.