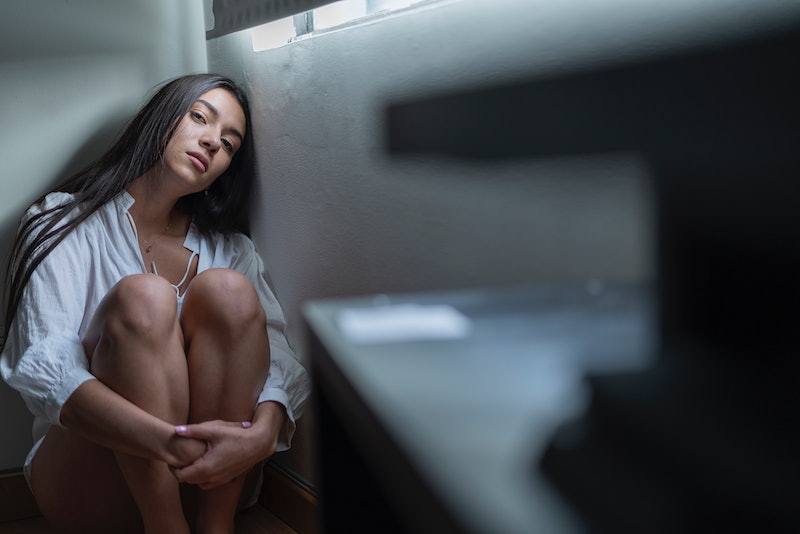 As Teddy Roosevelt (26th president of the United States and the envy of mustachioed gents everywhere) once said, "Comparison is the thief of joy." So if you, like myself and probably everyone else that's ever lived, have been struggling to stop comparing yourself to other people, then it's time to get on that. Of course, I'm not saying you'll ever get to the point where you stop with the comparisons completely, because I'm not convinced that's even possible. What you definitely can do, though, is keep in mind the one thing you should remember if you're always comparing yourself to others: Comparing yourself to other people serves literally no purpose — because it doesn't help anyone, and it will almost always leave you feeling miserable.

To be clear, I'm not judging you right now, OK? I know how easy it is to unintentionally get into the habit of comparing yourself to other people, because it's a habit I've kicked and picked back up again many times over the years. Hell, the ever-growing popularity of social media alone can make it super difficult to stop comparing your life to the lives of others — because everyone's lives are on display these days, and they mostly seem awesome.

In a world free of jealousy and negative self-talk, the enviable romantic relationships, professional achievements, and well-documented travels of our friends and families would only be inspiring. But it's easy to feel like you're doing life wrong when it seems like everyone you know is either going places you can't afford to visit right now, receiving promotion after promotion, and finding love. Fortunately, though, comparing yourself to other people is nothing more or less than a bad habit, and habits can be broken.

Here are six things you should remember to tell yourself if you compare yourself to others all the time.

Look, I know it's easy to feel down about where you are in life when your friends Instagram pictures of themselves doing amazing things that you've always wanted to do. It's hard not to get jealous when everywhere you scroll on social media someone's either posting pics of themselves on exotic beaches with their partners, or they're tweeting about the awesome cities they get to visit for work, or they're keeping things super low-key right now — but they still seem happier than you.

Social media can be deceptive, though, because none of it happens in real time. Pictures are edited, captions are well-thought-out, and most people simply aren't going to share anything about their life that they aren't proud of. As The Huffington Post reported back in 2013, a study which was published in the Personality and Social Psychology Bulletin found that people are less likely to reveal their negative emotions than their positive ones, and most of us naturally overestimate the amount of positivity in the lives of others, too.

So just because someone's life, job, body, and relationship may seem perfect on social media doesn't mean they aren't dealing with their own problems and insecurities. Instead of wishing your Instagram had more travel pictures, be grateful for the ones you have while you work toward making more.

Someone out there will probably always have more money, free time, or talent than you do, but that doesn't mean you aren't doing exactly what you should be doing right now. If you're working hard, paying your bills, taking care of your mind and body, spending quality time with the people and animals that you care about, and taking the time to do what makes you happy, then you're living well. Keep doing what you're doing, and ease up on yourself a little bit while you do it.

Unless they were supremely lucky or more privileged than most, the people whose professional successes you envy probably worked more than one job they hated before they landed their dream gig. Those Facebook friends whose travel pics give you major FOMO most likely spent years dreaming about all the places they wanted to visit before they could actually afford to get there. And the folks whose relationships leave you feeling lonely might have dated (and maybe even married) more than one dud before they found their current partner.

Almost no one achieves their life goals without going through some difficult sh*t first. (If you don't believe me, check out this list of celebrities who didn't become famous until later in life.) So the next time you're tempted to compare your life to someone else's, try to remember that nothing stays the same forever, and your future is full of possibilities.

4. "Past Me Would Probably Be Super Proud Of Present Me"

OK, so I don't know you personally, but I feel like the chances are pretty high that you've done something to be proud of by now. So instead of dwelling on everything you have yet to accomplish and discover, think about what you've already done. Maybe you're not in love with your job right now, but you did land one, and that's pretty great. Maybe you haven't made it to Europe yet, but I bet you've been to some other awesome places right here in the U.S. Maybe you're tired of being single, but you've probably had the courage to leave relationships that weren't working anymore, and that's a difficult thing to do.

I know it's easier said than done, but truthfully, the only person it makes sense to compare yourself to is the person you used to be. It's not fair to compare yourself to others, because everyone's personalities, connections, and financial situations are a bit different — and that's not necessarily a bad thing. As Fast Company put it back in 2013, "You're utterly unique, and so are your experiences, your worldview. That makes you valuable, and pretty awesome. Be the best version of yourself you can be, because no matter how hard you try, you can't be anyone else."

5. "Comparing Myself To Others Is Literally Bad For Me"

If you've been struggling to quit comparing yourself to others for some time now, then you don't need me to tell you that it feels awful. What you might not know is this: Constantly comparing your life to the lives of others is actually really bad for your health and your relationships. As The Huffington Post explained back in 2013, "Research has found that comparing breeds feelings of envy, low-self confidence, and depression, as well as compromises our ability to trust others." So the next time you feel like beating yourself up for not currently having the salary, new car, upper body strength, or relationship that someone else already has, remember what comparison can do to your health and overall well being.

I don't know about you, but personally, there have been a few times in my life when I felt like I didn't deserve to be happy until I'd gotten my life together and reached all of my post-grad goals. Looking back, I realize how stupid that was. At the time, I think I was afraid that allowing myself to be happy with my life exactly as it was would have caused me to lose my edge and fall into a career-killing, dream-crushing complacency. Here's the thing, though: being happy with what you have while you work toward what you want is never a bad choice. Actually, choosing happiness is really good for your health.

As The Huffington Post reported back in 2015, people who consider themselves happy have a lower heart rate, lower levels of the stress hormone cortisol, and they're better at making good life choices, too. On top of that, happy people are more likely to have supportive friends and family, they're emotionally healthier, and they don't get sick nearly as much as unhappy people do. So even if your career, finances, and love life could use some work, know that you deserve to be both happy and healthy right now.

More like this
The 19 Best Tweets & Memes About Bisexual Awareness Week
By Lexi Inks
Are Quality Time & Gift-Receiving Love Languages Compatible?
By Lexi Inks
The Differences Between Polyamory & Open Relationships
By Lexi Inks
Here’s Why Sagittarians Should Pursue A Career In Academia
By Nina Kahn
Get Even More From Bustle — Sign Up For The Newsletter