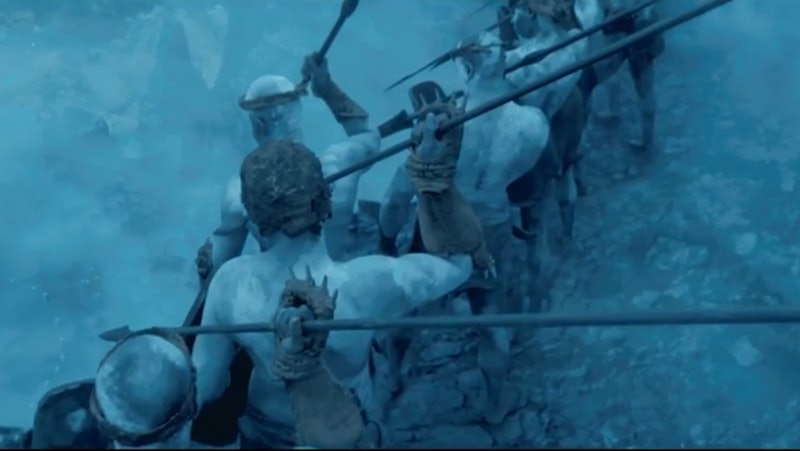 One of the most popular heroes of the 20th Century, Tarzan, finally gets a 21st Century update in the new big budget, live action film, The Legend of Tarzan. An insanely ripped Alexander Skarsgård portrays the King of the Jungle, who has to face off against a number of physical challenges including an angry gorilla, a vicious Belgian practitioner of genocide (Christoph Waltz), and a tribal leader, Chief Mbonga (Djimon Hounsou), who wants him dead. Mbonga's tribe, whose warriors cover themselves from head to toe in white body paint, steal the show, but who are the tribal men in Legend of Tarzan , and are they real?

The tribe in The Legend of Tarzan , though they look cool, appear to be made up for the movie. Their appearance is quite similar to the fictional Ghost Tribe in the 1995 film Congo, who also covered themselves in white body paint. Tarzan takes place in the Congo as well, but in the late 19th Century, at a time when Belgian colonialism was ravaging the area. The real life indigenous tribes of the Congo, such as the Mbuti, Baka, and Twa, were often grouped together by Westerners as pygmies, given their small stature. Today, the term is considered derogatory, and doesn't really match up with the physically-imposing tribesmen of the film anyway. So where did the idea for the look of the movie's natives come from?

The inspiration for the white painted warriors could have come from a number of tribes located across the African continent. The men of certain Xhosa tribes in South Africa are known to paint their faces and bodies with white clay before undergoing a circumcision ritual. The Karo people of Ethiopia use white chalk on their bodies both to impress the opposite sex and to intimidate rival tribes — of which the latter makes sense in the context of Tarzan. The Surma, also of Ethiopia, use elaborate white body paint for various reasons, including decoration for ceremonial stick fighting. And among all of these tribes, a secondary use for the paint is a practical one: Since they live with little or no clothing, the paint provides valuable protection from the sun.

These are just some of the tribes of Africa that practice the art of body painting, and it's quite possible that similar peoples were present in the Congo during the turn of the 20th Century. But the tribe in The Legend of Tarzan appears to be fictional, which isn't too surprising because the story of Tarzan isn't exactly known for strictly adhering to facts.