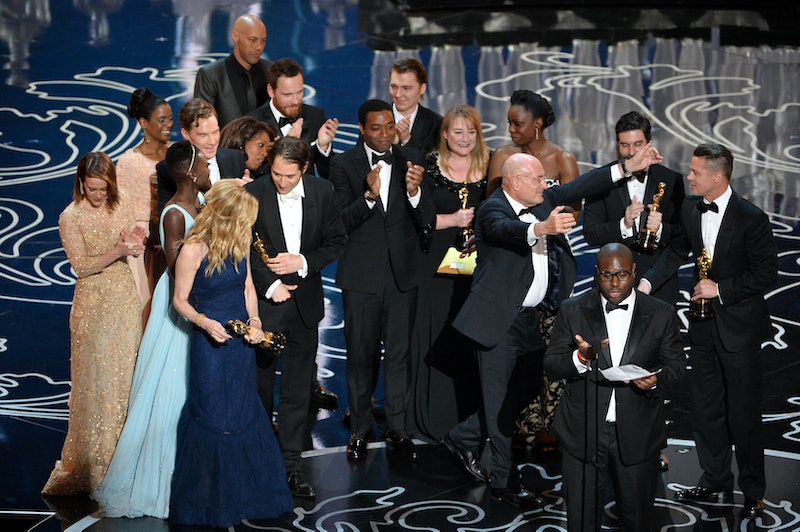 There was a lot to celebrate about Sunday night's Academy Awards, even if you took last place in the office-wide Oscar pools. From 12 Years a Slave getting its Best Picture due to Ellen DeGeneres hosting the world's most high-class pizza party, the night was filled with fantastic, memorable moments. Even better? Both of those moments, along with a considerable number of others, made this year's Oscars the most diverse in recent memory.

First, there was every award won by 12 Years a Slave. The powerful film not only took home Best Picture, but also Best Supporting Actress for Lupita Nyong'o and Best Adapted Screenplay for John Ridley. Although 12 Years was widely considered the frontrunner to win all three awards, there was some contention over whether Oscar voters would choose to reward "lighter" choices like Gravity or American Hustle, instead. In the end, though, 12 Years won enough votes to take home the night's grand prize, making Oscar history as the first Best Picture winner to be directed by a black filmmaker. And when Ridley won his screenplay award, he was only the second black writer to ever do so. Nyong'o is the sixth black woman to win Best Supporting Actress.

And then there was Gravity. Although the film starred and was about white actors, it was directed by the Mexican-born Alfonso Cuaron. When Cuaron won the Oscar for Best Director, he became the first Latino to ever take home that particular prize in the awards' 86-year history. In addition, Gravity's cinematographer, the Mexican Emanuel Lubezki, received the Academy Award for Best Cinematography.

As for Best Actor and Best Supporting Actor, those honors went to Dallas Buyers Club, a film about the AIDS crisis of the 1980s. Although both Matthew McConaughey and Jared Leto are straight, the fact that they starred in a film that so strongly represented both people with AIDS and members of the LGBT community makes their wins even better. In his acceptance speech, Leto, who played a transgender woman in Dallas, noted the "36 million people who have lost the battle to AIDS," along with others who've been discriminated against because of sexual orientation.

While the Best Actress race consisted of five white, straight women, its winner, Cate Blanchett, used her time at the podium to chide Hollywood for its history of sexism. Acknowledging the success of films like Gravity and The Exotic Marigold Hotel (which her competitor, Dench, was busy filming a sequel to), Blanchett called out the industry for not making more female-fronted films, despite their box office potential. “To the audiences who ... are still foolishly clinging to the idea that female films, with women at the center, are niche experiences, they are not," she said. "Audiences want to see them, and, in fact, they earn money."

And finally, one of the night's biggest feats in diversity didn't have anything to do with the winners at all, but rather, the person in charge of the whole ceremony: Ellen DeGeneres. In her second time hosting the Oscars, the comedian made history as the first openly gay host in Academy Award history, and only the second woman ever to lead the show solo. It didn't hurt that she was hilarious while doing so, too.

So all in all, the Oscars did well this year in regard to diversity. Sure, it would've been nice if Dallas' Rayon had actually been played by a transgender actress, or if the audience hadn't breathed such a big "we're not racist, guys!" sigh of relief when 12 Years won Best Picture. And yes, Hollywood is still far too white-washed, and there's no telling what, if any, impact the Oscars' diversity will have within the industry. Yet for now, it's satisfying enough to see just how many barriers were broken and strides were made at this year's ceremony. Progress may be slow, but judging from the Oscars, a more diverse Hollywood is right around the corner.

More like this
Twitter Is Identifying With Sally Field & Jane Fonda’s Friendship In New Viral Video
By Jake Viswanath
24 History-Making Black Women You Probably Didn't Learn About In School
By Ayana Lage and JR Thorpe
25 Inspiring Quotes From Black Women To Celebrate Black History Month
By Kyli Rodriguez-Cayro and JR Thorpe
"Lavender Haze" Star Laith Ashley Breaks Down Filming With Taylor Swift
By Jake Viswanath
Get Even More From Bustle — Sign Up For The Newsletter
From hair trends to relationship advice, our daily newsletter has everything you need to sound like a person who’s on TikTok, even if you aren’t.