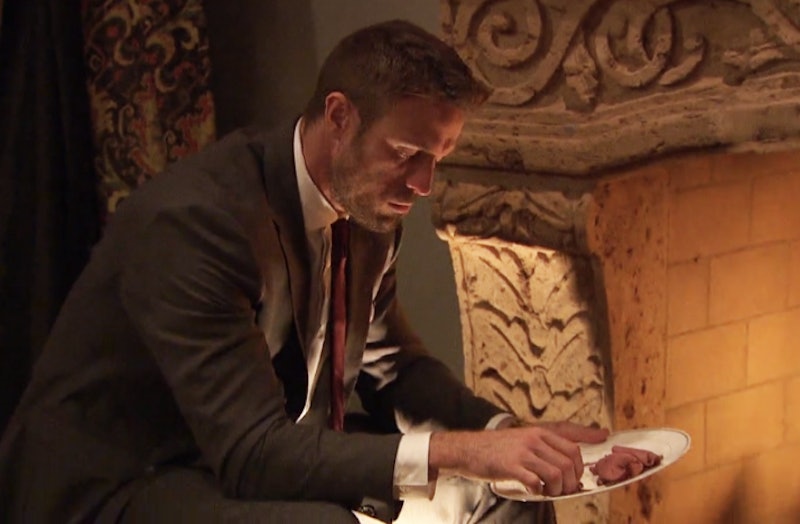 When I was a kid, one of the major debates of the day was based around the question "Which Spice Girl are you?" There's just something in human nature about wanting to match up things with other things. (If I were an animal, I'd be a squirrel, and you're lying if you say you haven't thought about which animal you'd be.) So, now that I'm a 27-year-old woman, I'm still answering questions like this, but much more mature ones, of course. For instance, if suitors from JoJo's Bachelorette season were various items of food, what would they be?

It's a question that is just needs to be answered, because... well, because it's fun. Plus, I feel like the foods that best match up with the suitors can really sum up a lot about the guys' personalities and that's important because... fans need to know which guy is right for JoJo? And we need to know if she is really as into that slice of pepperoni pizza as she thinks... or something. Dang it! Just let me match them up with food! The images of Chad menacingly eating deli meat are still embedded in my mind and I need this for catharsis.

And because once I decided that Luke was totally a hamburger, there was no turning back.

Like James Taylor, s'mores are wholesome and pair well with a campfire and some guitar playing. And like James Taylor's constant outburst into song, s'mores get to be too much once you've had too many of 'em.

Shout out to Romper TV Editor Allison P. for this one. Alex is short ribs, because he's all-American, he's bold, and I can easily picture him at Applebee's. (Also... well, you know.)

Because it's Canadian and thinks it's fancier than it is.

"Want me to make you a smoothie? I'm making one for myself!" Derek asks you excitedly after returning home from from his early morning workout. (Tell me you can't easily imagine that situation.)

Chad is salami, because I'm pretty sure 75 percent of his body weight is literally deli meat. (The other 25 percent is protein powder.) Hat tip to Bustle TV Editor Samantha R. for choosing the correct deli meat for Chad.

"Nah. Watching the game with my bros and grabbing some wings," Chase texts you back.

(Disclaimer: No offense to bros, sports fans, or people who enjoy eating wings. This just is what it is.)

His job description is half of what lead to this choice. His doofy ways are the other half.

Jordan - Slice Of Pepperoni Pizza You Ate While Drunk

Late night pepperoni pizza looks great and it seems like the best idea at the time... but is it?!

As a military vet, Luke also has that all-American thing going, but he's not saucy enough to be a cheeseburger. Thus, he's a hamburger. And one probably topped with only ketchup and mustard.

Robby is a swimmer (so I chose fish, naturally) and he also seems like the type of guy who would take you to a restaurant where you have to say, "I'll have the salmon." Then you go home and you think to yourself, "Damn. I really prefer eating salmon as lox, or sushi. Just something more exciting! You know what I mean, self?" And then you start to question everything.

(Also, look at this shirt he wore.)

Hipster ass shizz for the only Bachelorette suitor I've ever seen take his bio pic in a jean jacket.

More like this
JoJo Fletcher & Jordan Rodgers Got Married In A “Playful & Fun” Wedding
By Grace Wehniainen
Jake Daniels Just Became The UK’s First Active Football Player To Come Out As Gay Since 1990
By Sam Ramsden
What Is Jeanie Buss' Net Worth? The Lakers President Is Uber Rich
By Hugh McIntyre
Kylie Jenner Roasts Kendall For Her Cucumber Cutting Skills On TikTok
By Jake Viswanath
Get Even More From Bustle — Sign Up For The Newsletter