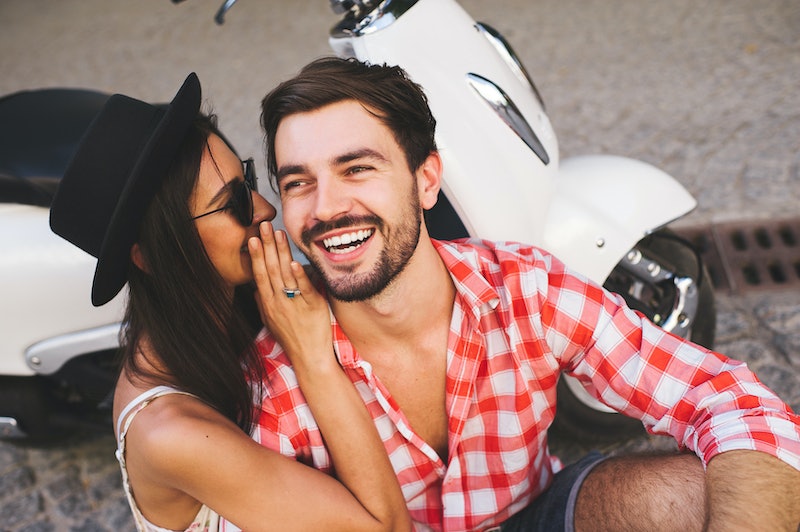 If you’re wondering how to make your relationship better now, then it’s time to start thinking about the days ahead and doing so optimistically. According to a new study, the key to a happy relationship is being optimistic about the future. Of course, this is easier said than done, but apparently even those who don’t have the most optimistic disposition can get on board with a little effort.

The study by University of Maryland professor of psychology Edward Lemay found that “forecast satisfaction,” in which people look toward the future of their relationship with sanguinity, are happier in the moment than those who don’t have so much hope for the future. Through a series of experiments and questionnaires, Lemay measured present satisfaction, commitment to the relationship, expectations for the future, and whether the participants thought they could do better than their current situation.

What he found was that the outlook on the future had very much to do with the present and even those who aren’t so positive about the future could, if they focused on an optimistic possibility, achieve relationship satisfaction in the moment, too. Basically, successful relationships are somewhat dependent upon a “don’t worry, be happy” mentality.

Not only does "forecast satisfaction" make couples happier, but it has other positive effects on the present relationship, too. Here are four of them.

According to Lemay’s research, “People are on their best behavior when they think this relationship will be a happy one in the future.” In other words, if someone firmly believes that the days ahead are bright for the relationship, you probably don’t have to worry so much about them getting into trouble. This isn’t to suggest that you’ll be dating an angel or anything, but that these people are more likely to stay on the straight and narrow.

Because all couples fight, even those who are happy in their relationships, one of the studies found that those who are more optimistic about the future fight healthier. Lemay filmed couples fighting and had a third party rate the fights. What it came down to is that these people had “nice, less-destructive fights” than those who might not be so cheery about the future of their relationship.

3. They Are More Committed

Lemay studied the participants a year apart to see how the relationship changed based on this optimism. What he found was that the people in the first session, who spoke of their future optimistically, were even more committed to their partner a year later when they were interviewed again.

4. They Are Kinder On A Daily Basis

Another way in which this “forecast situation” helped positively affect the present-day relationship was that these people were kinder on a daily basis to their partner, than those who saw the future in a more negative light. Not only were they kinder, but more supportive and accommodating, too.