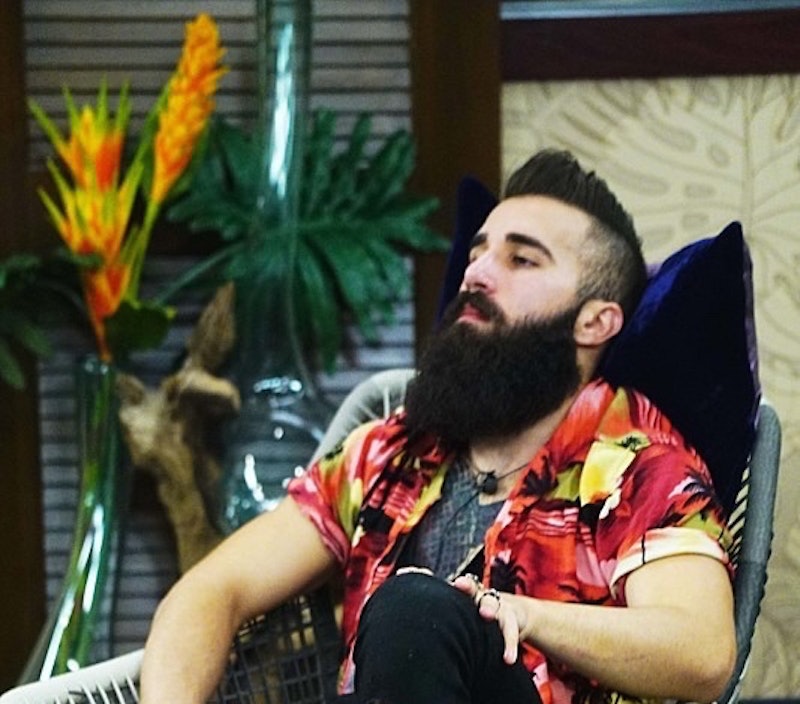 Big Brother has a thing for beards. For four seasons in a row now, the cast has featured one contestant sporting an impressive beard that helps define the physical appearance of the houseguest. For BB18, the bearded houseguest is tattooed clothing designer Paul Abrahamian whose beard, massive body art, and bold attitude has made him a magnetic personality in the house. Paul's appearance provides a strong contrast to the more boy-next-door men in the house like Paulie and Corey, but how much of that look is in the beard? Does Paul still have his rockstar mystique when he shaves? What does Big Brother 18 star Paul look like without a beard?

As the beard representative of BB18, Paul has a particularly great one. Paul's facial hair is far more fashionable and refined that BB15's Spencer or the beard of BB16 's Donny. Not only does Paul have a very impressive and well-groomed beard, but he's smart enough to not make the same mistake that BB17's Austin did and spend all summer sporting a beard-bun. Paul likely won't be getting rid of his beard any time soon, but judging from old photos of him, Paul can still pull off any look he wants regardless of the status of his facial hair.

Without a beard, Paul still manages to look extremely fashionable, but he presents an entirely different vibe. Paul's beard seems to be representative of his large personality, and without a beard, Paul gives off a more innocent and less extravagant energy. Paul's beard is as definitive to him as Vanessa's beanie was in BB17, or Frank Eudy's hair in his appearance on BB14.

While it doesn't seem like Paul's beard is going anywhere any time soon, it may not be up to him. In previous seasons, the punishment of shaving one's head has been utilized by the producers of Big Brother, and forcing a contestant to shave off their beard would be the next logical step. However, it is tough to imagine Paul doing anything that would even risk him losing his beard, as it has become such an essential part of Paul's overall look. Paul's pictures of himself on Instagram all feature him after he had fully grown out his beard, except for one before-and-after picture and a picture of him getting rather friendly with a canine compatriot of his.

Other than those two images, it's all beards as far as the eye can see for Paul's present and future.