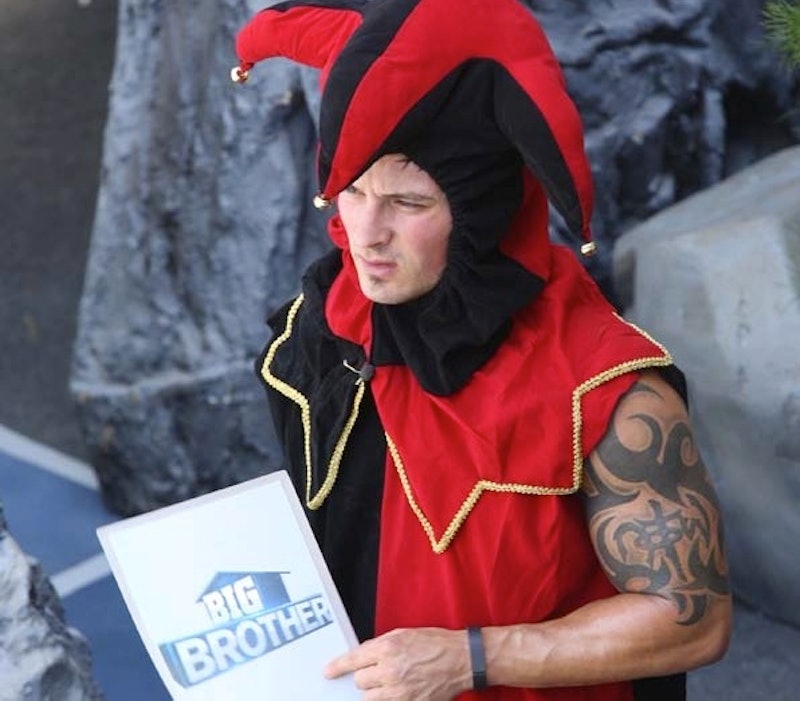 You would think as an admitted ex-military personnel, Caleb Reynolds would have less of a problem with a buzz cut on Big Brother's season 16. After the Battle of the Block competition that he and Victoria Rafaeli won, they were somehow tasked with penalty punishments. Not only are Victoria and Caleb tied together for 48 hours, but Caleb also had to shave his head. During the lead up to that particular penalty, all Caleb did was complain about it. He complained that he wouldn't look good with a shaved head. He complained that he had a discriminatory tattoo on his skull preventing him from shaving his head. (Which, honestly, sounded like a genuine possibility, but thankfully was just a horrible joke.) He complained that Mariah, the new love of his life, wouldn't like a man with a shaved head. At that point, the other house guests probably wanted to hold him down and shave his hair off just to get him to shut up.

Then again, it's probably exactly because he's ex-military that Caleb knows all too well that he looks "ugly" with a shaved head. But $500,000 is $500,000 and it's not like his hair wouldn't grow back out eventually. So, with that kind of logic in mind, Caleb finally quieted down and allowed Victoria to shave his head.

All Big Brother fans seem to agree about the fact that Caleb looks good with that buzzcut. In fact, he's actually kind of a lot hotter this way. He would look better if he hadn't immediately decided to shave a stripe into his left eyebrow as well and if he would take off the crown, but his shaved head is not the aesthetic horror story that he had everyone expecting from all of his whining.

Quite honestly, Caleb should take the new hair cut as an opportunity to debut a new Caleb in the Big Brother house. Unbeknownst to him, none of his allies are loyal to him and he's made himself so easy to manipulate that he still doesn't realize that it was always the plan to backdoor Amber Borzotra with or without his support. If Caleb turned over a new leaf, the house guests and the audience might like him better.

At this point, he still thinks that if and when he is finally evicted then he will be heralded with screams and praise for going Beastmode Cowboy all over the place and he's in for a rude awakening. If Caleb really wants everyone to appreciate his outer and inner beauty, then here are some suggestions for how he can turn his image around.

First of all, Beastmode Cowboy is opening him up to all sorts of unfortunate fan nicknames like "Creepmode Cowboy" and "Beastmode Creepboy". Second of all, fans all over the world are getting alcohol poisoning from making a drinking game out of how many times he calls himself that. Just stop.

2. Build a genuine friendship with Victoria.

Frankie encouraged Victoria to build a bond with Caleb for her protection in the game, but there's no reason why Caleb can't build a more genuine bond with Victoria. Victoria is one of the most underrated competitors in the household because she's a weak player who is constantly on the block, so it would be nice to see someone know and like her as a person.

The biggest thing that turned the audience against Caleb was his obsessive crush, which he carried out in the most misogynistic way. His crush on Amber ruined her game and now he's got a crush on Nicole's friend Mariah that's making everyone nervous. Caleb needs to stop with his backward ideas of romance and, even better, apologize to the cameras for his behavior so far.

The second biggest thing that turned the audience against Caleb was his tendency to go around the house eye-stalking people. He watched them sleep. He stood at the door and watched them out by the pool. He sat in the room and stared at Amber and Cody as they cuddled. He even watched them from across the room with a toy knife in his hands. That is beyond creepy behavior, Caleb. Cut it out.

Caleb's ego truly has to be seen to be believed. From declaring that he's going to walk out to applause that will rival the Super Bowl when he gets evicted to being confident that America is probably hating Amber for treating him so badly (spoiler alert: we don't), Caleb thinks he runs the house and has no idea how wrong he is about that. He needs to realize that he's nowhere near as great as he thinks he is and become more humble as a result.

Donny won over whatever members of the audience he hadn't already won over when he competed in the PoV competition and used the veto to take Jocasta off the block since she was too sick to fight for herself. He might take it overboard, but Caleb looks out for the people that he cares about in this game, so it would be nice to see him take on a protective brotherly role to people like Jocasta or Donny or Victoria. It would make him more likable, especially if he didn't expect anything from them for doing it.

Caleb's biggest failing as a competitor right now is that he's placed his absolute trust in an alliance that is constantly working behind his back. If he wants to gain our respect as a player, he needs to realize that Frankie and Zach (and even Derrick, Cody, and Hayden) do not have his best interests at heart. Either Caleb needs to make peace with them or he needs to start outmaneuvering them — and fast. Of course, even if he tries all of these methods, Caleb still might never be a fan favorite because none of this will undo what he did to Amber. Still, it's a start.