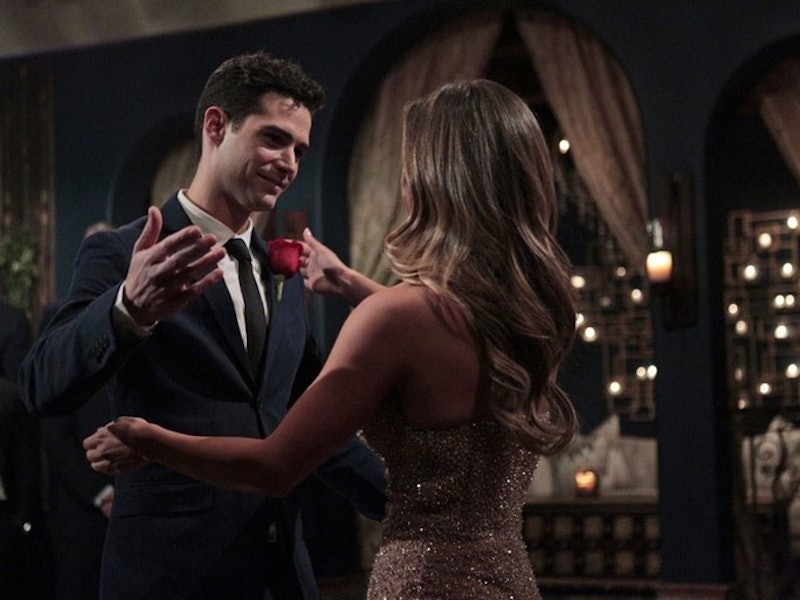 If you're anything like me, there's one question that can easily make or break any first date: "What are you reading?" In my opinion, there's only one wrong answer: "I can't remember the last thing I read."

Your TV boyfriend Wells Adams chatted with Bustle about pizza, Carl the Bloodhound (his one true love), the possibility of becoming the next The Bachelor, and everyone's-least-favorite-contestant, Chad. But most importantly, he answered that one tricky question that can tell you so much about a person. He tells Bustle that the last book he read and loved was Ernest Cline's beloved sci-fi young adult novel Ready Player One .

The book — which is being adapted for film by Steven Spielberg — follows Wade Watts, a kid with a rough home life who finds his escape in OASIS, an elaborate virtual reality where he plays by the name Parzival. In the OASIS, he joins a sea of users in the search to find the easter egg of James Halliday, the OASIS's creator, and win the prize money attached to the illustrious find. Peppered with '80s pop-culture references and commentary on video game culture, this addictive young adult novel will appeal to readers young and old — sci-fi fans, gamers, or otherwise. (But seriously, it should come as no surprise that this adventure-packed ode to video game culture was written by a man who owns not one but two DeLoreans, one of which he lent to George R. R. Martin to promote the opening of his bar.)

As someone who stayed up all night to finish reading Ready Player One a few years ago and has been recommending it to everyone who will listen, I'm pretty stoked on this answer. It's a gateway novel, if you will, that often leads people to read more sci-fi and more young adult lit. So, with that in mind, here are five books to read if you love Ready Player One:

This is one of Ernest Cline's favorite books, and its influence upon his debut novel is undeniable. (Bustle previously named it "the ONE novel to read if you loved Ready Player One .") Large portions of Stephenson's classic sci-fi adventure take place in the Metaverse, a virtual reality that bears some similarities to the OASIS of Ready Player One. The main character, Hiro Protagonist, also gives me major Wade Watts vibes. Self-professed as the "greatest swordsman in the world," Hiro Protagonist (get it?) has a virtual reality persona that's far cooler than his one in real life. Sound familiar?

"The sky above the port was the color of television, tuned to a dead channel."

So begins William Gibson's Neuromancer, one of the most important cyberpunk novels of all time and the first book to win the so-called "triple crown" — The Nebula Award, the Philip K. Dick Award and The Hugo Award. The world of Neuromancer features an elaborate virtual reality called the Matrix. The protagonist, a hacker named Case, has been poisoned with a toxin that prevents him from accessing the Matrix. The adventure unfolds when Case is approached by Armitage, a mysterious man who promises him a cure for the poison in exchange for a security code located in a tightly guarded databank.

In my experience, anyone who loves Ready Player One, loves Ender's Game. (And vice versa.) Perhaps the quintessential sci-fi novel in the young adult canon, Ender's Game is the story of Ender Wiggin, a military genius who is drafted at age six to attend the Battle School and undergo intense military training. His superiors believe that he could be the key to defeating the alien enemy who have threatened the earth for over a hundred years. As Ender prepares for the battle of a lifetime, he must navigate his burgeoning adolescence, the hyper-competitive nature of his classmates, and his own loneliness and isolation.

4. Cure for the Common Universe by Christian McCray Heidicker

I think we can all agree that Wade Watts — though lovable, courageous, and brilliant — could benefit from some time away from OASIS. In Cure for the Common Universe, 16-year-old Jaxon is sent to video game rehab after meeting a girl who may actually (possibly? sort of?) be interested in dating him. Over the course of his four days of treatment, Jaxon has to learn how to top his high score in the scariest game of all: real life. If your favorite part of Ready Player One were the video game references, you'll love this sweet ode to gaming culture.

This novel straddles the line between young adult and adult, and will likely appeal to fans of both. Alif, a hacker, lives in an unnamed Arabic security-state simply called The City, and he uses his computer skills to protect his clients from the unwanted surveillance of the government. But his life becomes incredibly complicated when he falls in love with a high-ranking girl, who in turn becomes engaged to a government official with a special vendetta against Alif and his ilk. This novel also incorporates jinn mythology for an unexpected (but completely awesome) magical twist.