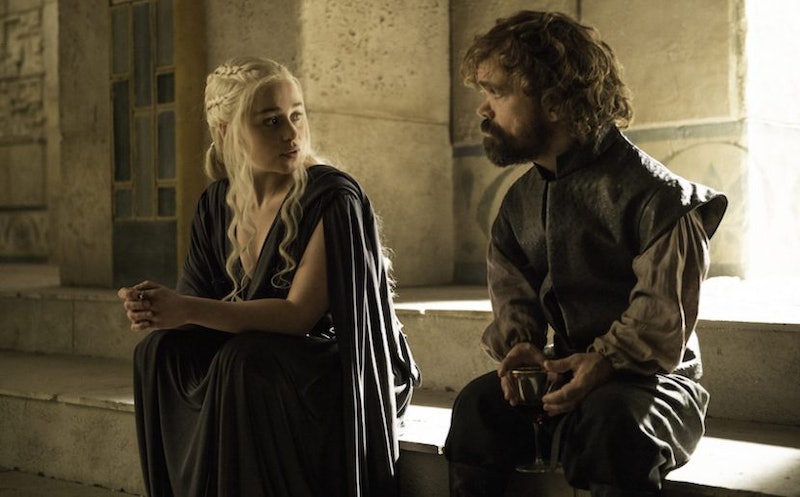 Seeing Daenerys name Tyrion as Hand of the Queen was a beautiful moment in Game of Thrones Season 6, but it was also a moment of history repeating itself — albeit, under vastly different circumstances. The Lannisters and Targaryens have a complicated past involving conquests, reluctant friendships, and betrayal. These two houses, arguably the two most powerful Westeros has ever seen, had an uneasy alliance for many years, and the trust forged between Daenerys and Tyrion has brought the two houses together again. At least for now.

The history of Westeros has been meticulously mapped out by George R. R. Martin, and based off of A Song of Ice and Fire's backstory, it seems the Lannisters were forced to bend the knee to the Targaryens after a crushing defeat during the War of the Conquest (this was the war where Aegon the Conqueror and his two sisters rode into battle on three dragons). Even though Aegon defeated the Lannisters, he allowed them to remain at Casterly Rock creating an alliance between the two houses. Fast forward many years, and Tywin Lannister was chosen by the not--yet-mad King Aerys to be his Hand.

The question of how close Tywin and Aerys actually were is largely unanswered, although Aerys clearly put a lot of trust in Tywin. But, there is an excellent chance Aerys chose Tywin to be his Hand because of Tywin's wife Joanna. You've heard all of those rumors about Tyrion potentially being a secret Targaryen, right? Well, this is where they come from.

Before Joanna and Tywin were married, she served as a lady in waiting at King's Landing where she and Aerys became close. When Tywin married Joanna, he was not a fan of her relationship with Aerys. It is rumored Aerys and Joanna were actually carrying out an affair, and Tyrion could be the product of the affair. Either way, Tywin — who, despite his faults, pretty much worshiped Joanna — was not cool with his king being so into his wife.

If Joanna and Aerys' relationship was the first blow to Tywin and Aerys' relationship, the second was Tywin taking six months to resolve a situation where Aerys was taken hostage. By the time Aerys was returned to King's Landing, he was beginning to go mad. He no longer trusted Tywin as he did before, and refused to marry Cersei to his son Rhaegar as Tywin asked. Aerys then twisted the knife further by naming Jaime to his Kingsguard, essentially robbing Tywin of his heir (not that Jaime minded at the time, because he thought he would get to be close to Cersei when she married Rhaegar). At this point, Tywin was done with Aerys, and resigned his position as Hand of the King to return to Casterly Rock.

Whatever friendship that existed between the men died when Joanna died, in truth. But, it only deteriorated more once Aerys brought Tywin's children into the mix. Even after Tywin resigned and Robert began his rebellion after Rhaegar and Lyanna rode off together, Tywin did not immediately rise up against Aerys. While he may have held back his financial and military support because Aerys had his son, or out of some sense of residual loyalty, it is far more likely Tywin wanted to see how the war would play out before he chose a side.

Ultimately, it was the Lannisters who dealt the final crushing blow to the Targaryen line. Jaime killed Aerys, and Tywin had his men kill not only Rhaegar's wife, Elia of Dorne, but also her two small children. Only Aerys' queen escaped across the Narrow Sea with Viserys and the unborn Daenerys. Because the Lannisters and the Targaryens were so closely tied together, Tywin knew he had to go all in to prove he was on the side of the Baratheons and the Starks, which led to the bloodshed of every Targaryen at King's Landing at the time.

Now, there is once again a Targaryen and a Lannister allying themselves thanks to Daenerys and Tyrion's friendship. Luckily, they both know the history of their fathers, and should be able to avoid making the same mistakes. Still, Daenerys is a smart woman and she knows the Lannisters betrayed her family once. As much as she wants to start again, the history of her house with the Lannisters' has to weigh heavy on her mind. Tyrion is loyal to Daenerys now, but if she goes after Jaime — who Tyrion owes his life to — will he be able to betray his brother?

Calling the Lannisters and Targaryens friends is a stretch, but these two proud houses have a history that is inextricably tangled together. Dany and Tyrion are the next chapter in their history, and their alliance, like the alliance between their fathers before them, could set the tone for both houses for years to come.