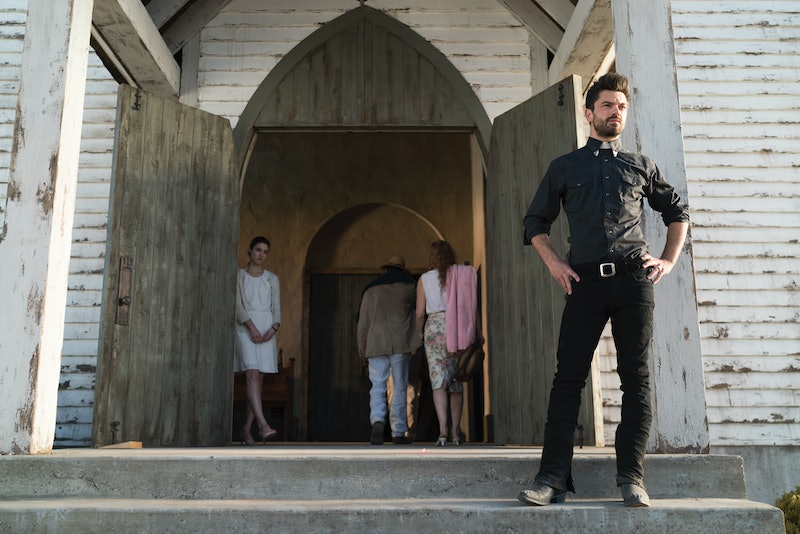 With Game of Thrones over for another year, your TV dance card is probably looking a little empty. Given just how much amazing TV there is out there, that will not do. While nothing is quite like GoT, there is one show Game of Thrones fans should be watching this summer, and that show is AMC's Preacher. No, it is not set in a medieval fantasy world, and while there are lots of moving parts, the cast is nowhere near as sprawling, but Preacher is the show you need to watch in the aftermath of Game of Thrones Season 6.

When it comes to show recommendations based on Game of Thrones, there is a tendency to lean toward shows with a similar aesthetic — Outlander, Spartacus, The Last Kingdom — but if you look at everything that makes Game of Thrones great from its storytelling style to its characters, Preacher is a much closer match. The series is set in a sleepy Texas town where a reluctant preacher named Jesse finds himself with an amazing gift (or curse) of power over others. He is joined by Cassidy, a vampire with a love of good jokes and potent drinks, and Tulip, Jesse's one time partner in crime. Then there are the angels, flashbacks, a mysterious corporation, and enough questions about the nature of faith to keep Melisandre occupied for months.

Like Game of Thrones, Preacher is based on preexisting source material, in this case a comic book series. If you go into the show without reading the comics — like I did — there is a learning curve. Remember how hard it was to keep all of the Houses and alliances straight when you first visited Westeros? Preacher throws you right into the deep end of its mythology in the same way Game of Thrones did. It is perfectly OK if you have no idea what is going on half of the time because Preacher is not telling an entirely linear story. It invites you to sit back and enjoy the strange journey of Jesse, Tulip, and Cassidy as it unfolds.

The show moves between places and times in a manner that can feel unforgiving at times. It demands your attention, and rewards it with character beats instead of answers. Preacher is at the very beginning of its tale, and it is taking it slow as it weaves the story across generations, through space and time and whatever lies between. This is a show deeply concerned with what it means to be a person of faith, to be good, and to be bad, and whether or not you can be all of those things at once.

Jesse anchors the show, and while he easily could have been an antihero cut from the same cloth as Walter White or Don Draper, he is something else entirely. Jesse has murdered people, he has done truly terrible things, but he also made a promise to his father. He wants to be a faithful man, an agent for salvation, and he is chosen by something much bigger than anything on Earth. How he will use his newfound power is a question even he is still struggling with.

While I wish the show had a wide array of fascinating female characters like Sansa, Dany, and Arya, it only has the one at the moment, but to her credit, Tulip is one hell of an interesting person. Her desire to have Jesse join her on a mission of vengeance is as powerful as whatever it was that fell from the sky and found a perfect host in Jesse. She is dangerous, witty, and capable of making a bazooka out of items found in a trailer park. You will love her and her unflinching ferocity in the same way you loved watching Cersei Lannister toast herself as the world burned around her.

Then there is Cassidy. A vampire in a show about Heaven, Hell, and the modern western way of life. Cassidy is an anomaly, a tangible connection to the supernatural world, but a jolly one with a dangerous streak. He is still very much a mystery, and even he does not seem completely sure why he is staying put in this lazy town in the desert where the only place to hide from the sun is a creaking, old church.

Season 6 of Game of Thrones delved into religion across all of its storylines. From the High Sparrow and his shame-based belief system to the zealotry of those who follow R'hllor, the characters could not escape the reach of religion, the will of the gods, or of men. Preacher presents a similar world, one where the devout, non-believers, and those who fall somewhere in between all coexist uneasily as they attempt to navigate destiny and free will. It seems there is just as much to ponder about the nature of a person's purpose in Texas as there is in Westeros.

Get in on Preacher now. The show has been going up against Game of Thrones in its first four weeks on air, and as a result it has existed quietly as its crazy, bloody, contemplative story roared to life. While I cannot promise you any duels or ice zombies, if you are looking for complex characters, stunning cinematography, and a pulpy story that lures you in with horror movie tropes and western touches before revealing just how dense it truly is, then you need to pay a visit to Jesse's parsonage. I hear his door is open every Sunday at 9 p.m. EST on AMC.