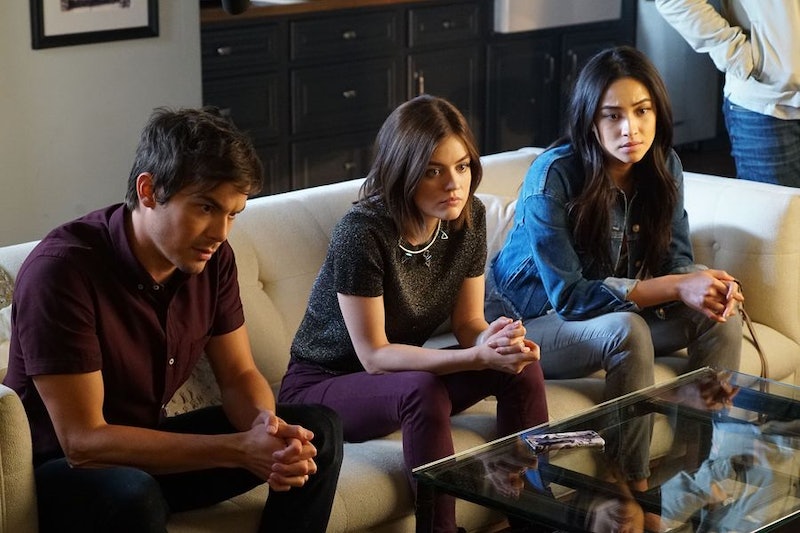 When it comes to being stalked and tormented by villains with somewhat unoriginal aliases, the Liars just cannot seem to catch a break. And now, it looks like they're being targeted by at least three different people — all of whom have a seemingly different motive. Doesn't it make you long for the days when Pretty Little Liars only gave us one villain to keep track of? I. Marlene King has clarified that Uber A and A.D. are one and the same — so that means we can eliminate Mary Drake and Dr. Rollins from our suspect list because they were both (literally) unmasked in the Season 6 finale and one thing we do know is that the show will wait until the eleventh hour to unmask the ultimate Big Bad. So, who is Uber A on Pretty Little Liars?

Rosewood is full of suspects and it doesn't help that the new A team has an endless supply of masks at their disposal — because this means characters who are meant to be out of sight and out of mind may have returned to town in disguise. (Looking at you, Wren and Melissa.) Personally, I hope that Uber A is somehow connected to Season 1, because it would be so rewarding for all the fans out there who have been dissecting every clue since 2010. Plus, there's no shortage of lingering questions from the show's freshman season. I mean, seriously — how does the N.A.T. Club fit into the overall puzzle?

With that in mind, here are four characters who could definitely be Uber A.

Could Spencer's sister be any more sketchy? I will never stop being a Wren/Melissa theorist — and now it seems possible that Melissa is also working with Mary Drake. They both flew from London to Philadelphia around the same time (shortly before Charlotte's murder). Plus, let's not forget that Charlotte was killed in the Season 6 episode "Of Late I Think Of Rosewood" — but the Liars didn't receive any threatening texts until two episodes later, when Melissa made her first appearance of the season. This was also the first episode that we saw Uber A begin to take action by ordering those creepy uniforms. It's all mighty suspicious if you ask me.

Variety recently confirmed that Noel Kahn will return for Season 7. He was a significant character during Pretty Little Liars' first two seasons, but then he faded into the background from Seasons 3 through 5 — and he was absent from Season 6 altogether. If the Charlotte reveal was any indication, Uber A will likely be a character who has been AWOL for extended periods of time.

When the Liars and viewers believed Ali was dead, Noel was one of the few characters who knew the truth and he helped her while she was on the run. However, it wasn't out of the kindness of his heart — Ali was blackmailing Noel and we still don't know his secret. It's possible that Ali has continued to blackmail him during the time jump and he's taken over the A game in order to seek revenge. Another hint that he'll be important to the Season 7 plot? The ninth episode is titled "The Wrath of Kahn."

It has also been confirmed that Jenna will return for Season 7. Don't you think it's sweet that all these characters will reunite in Rosewood? Yeah, me either. Like Melissa and Charlotte, Jenna had strong ties to the ever-suspicious N.A.T. Club. We've also learned that Jenna and Charlotte were friends — and we know that Uber A wants to avenge Charlotte's murder. Plus, Jenna has never forgiven the Liars for burning her — so this is one character who has multiple motives.

Full disclosure — I've always been highly suspicious of Ezra. With all apologies to Ezria shippers, I will never get past the fact that a) he had a relationship with Ali when she was really young and b) he deliberately sought out Aria, mislead her throughout their relationship, and failed to come clean about it until he was confronted with damning evidence. But, all that aside, he's more suspicious than ever after the time jump. At first, his erratic and angry behavior seemed directly related to the loss of Nicole — but now I'm starting to think that he hasn't been honest about that either.

Mary Drake's passport revealed that she'd spent time in London, but Toby also mentioned that she'd been in South America. This seems like a major red flag and a possible clue that Ezra and Mary are working together and they were somehow involved in Nicole's disappearance. Perhaps Ezra's personality shift is due to guilt rather than grief. He has been a red herring for A before — but the same plot device was used with Charlotte, so I don't think the fact that we've seen him in the black hoodie before should eliminate him as a suspect.

There's no word on whether or not Tippi the Bird will return for Season 7, but at this point we really can't rule out any suspects — human or otherwise.