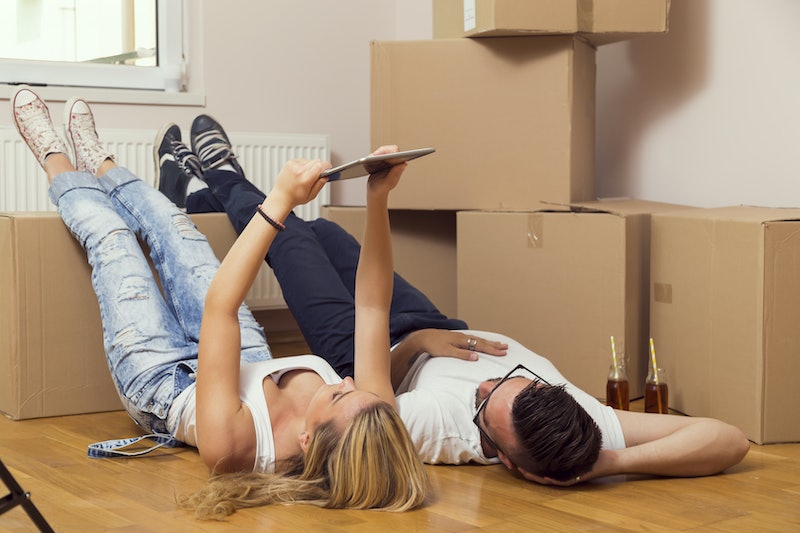 When you decide to move in together, you’re taking your relationship to the next level and basically saying, “Yes, I want to deal with you 24/7, because that’s how much I love you.” Aww… the love! But when people do start living together, things change because change is inevitable. According to research, couples move in together between dates 30 and 60.

Retailer Moshells.com surveyed 500 people who are living with their partners to see exactly where these changes happen to be. The 500 participants represented Baby Boomers, Generation X, and Millennials and were mostly heterosexual. The survey found that cohabitating, although fun, isn’t without its issues — especially if you go from living alone to living with someone. It also found that what people regard as a challenge is very much dependent upon their generation. For example, Baby Boomers are more concerned with sharing a bathroom, while Millennials are more focused on how they’re going to share chores evenly.

So, if you’re thinking about moving in with your partner then prepare yourself for some changes. Here are nine lifestyle changes you can expect once you take the cohabitating plunge.

1. You Wake Up Earlier

Even if you don’t have to be at the office until a certain time, when you live with someone your schedule may mimic theirs in some ways — especially if you're sharing a bed. For 41 percent of men and 31 percent of women, having to wake up earlier now that they’re living with their partner is the biggest change.

Unless you’re fortunate enough to afford a place where both you and your partner get your own bathroom (dare to dream, right?), then you have to share one. What that really means is that you get less time in the bathroom. According to the survey, 19 percent of both men and women cited this as biggest lifestyle change.

3. You Have More Dishes To Do

While two people makes for double the dishes, what’s interesting here is that more women than men complain about this being the biggest lifestyle change. (Is it perhaps that traditional gender roles are still alive and well in some hetero homes?) The survey found that 70 percent of women and 61 percent of men felt that having to do more dishes was the biggest change for them since moving in together. But, interestingly enough, Gen X men reported doing more dishes and household cleaning since moving in with their partner — so there's hope.

4. You Have To Cook More

For 77 percent of women and 61 percent of men, cooking more is the biggest change since moving in with their partner. Although, with delivery, I’m not sure how this could possibly be the case. I imagine one’s delivery intake would increase after moving in together.

5. You Have To Do More Laundry

OK, to be honest, this one sort of kills me: According to the survey, 80 percent of women and ONLY 49 percent of men say the biggest lifestyle change in their relationship since moving in with each other is having to do more laundry. I mean, come on! What year is this?! The survey also found that this was most especially true for Baby Boomer men, who reported doing less laundry and less cooking once moving in with their partner.

6. You Have Have To Clean More

Although it doesn’t have such a high percentage gap as doing the laundry, when it comes to cleaning more, with 71 percent of women and 54 percent of men citing their biggest lifestyle change as cleaning more, it’s still not pretty.

For 42 percent of women and 33 percent of men, the biggest lifestyle change when they move in with their partner is TV consumption — in that they watch more of it than they did before they lived together.

For 16 percent of men and nine percent of women, the big challenge is sharing food, which, honestly, doesn’t make sense to me. I’ve always believed that you should hide the food you love in order to protect it from a ravenous S.O.

A place where there wasn’t too much of a change was in regards to time spent online. The survey found that only 20 percent of women and 32 percent of men felt their biggest change was the amount of time they spent online since moving in with their partner.