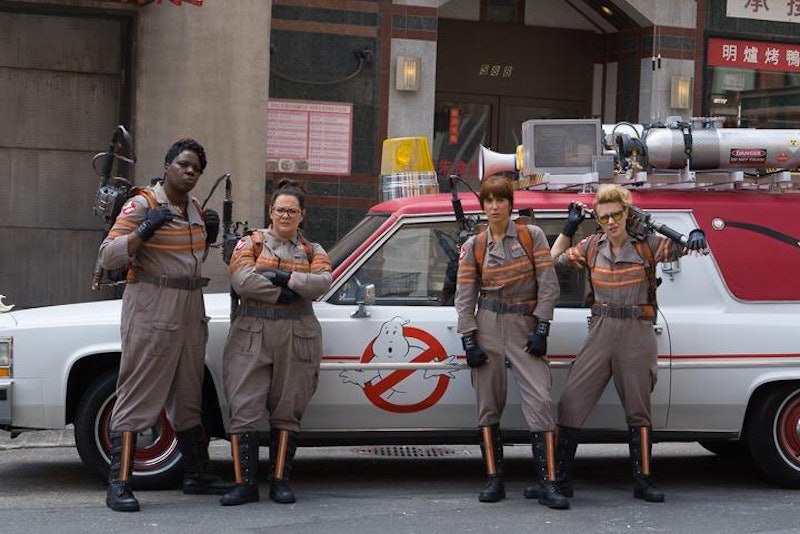 There is no Dana, there is only Zuul. There's also nothing that is making me as excited and as happy as the upcoming Ghostbusters reboot. Haters to the left, because the new movie, which is helmed by the brilliant Paul Feig and stars Kristen Wiig, Melissa McCarthy, Leslie Jones, and Kate McKinnon, is poised to be as epic as one could hope a Ghostbusters reboot could be. How could it not be? A lot of people have been hating on the upcoming reboot, which I think is childish and selfish, and so I have a question for them. If this reboot was terrible and awful, would Bill Murray cameo in Ghostbusters? I think not. But luckily for us, Murray does appear in the new Ghostbusters . So, like I said: haters to the left.

But what spurred the legendarily picky actor to finally say yes, after years of denying to partake in any type of reboot or remake of the Ghostbusters franchise? In an interview with Jamie Sharpe of Vulture, Murray said:

“I like those girls a lot,” he said. “I mean, I really do. They are tough to say no to. And Paul is a real nice fellow...I started to feel like if I didn’t do this movie, maybe somebody would write a bad review or something, thinking there was some sort of disapproval [on my part].”

In addition to his interview with Vulture, Murray (along with Dan Aykroyd, Ernie Hudson, and Annie Potts) joined the new cast of Ghostbusters on Jimmy Kimmel Live to promote the upcoming movie. They all agree that the film is wonderful and that the women starring in it are hysterical and, in fact, do it justice.

But now that both Murray and Aykroyd are confirmed as making cameos in the new Ghostbusters, will they appear as the beloved Dr. Peter Venkman and Dr. Ray Stantz? Sadly, no, they won't. Instead, both actors are appearing as two new characters, the details of which are being kept quiet — mostly. It's been reported by Rolling Stone that Aykroyd will be playing a conspiracy theory obsessed cab driver who interacts with Wiig's character. Details about Murray's cameo, meanwhile, have been sparse but one detail has emerged: he will be playing a supernatural "skeptic" out to debunk the Ghostbusters.

For both Murray and Aykroyd, their cameos are big departures from their original characters, yet the fact that two of the original Ghostbusters have given their blessing and will be appearing in the new film is quite spectacular. Whether or not the Ghostbusters are male or female shouldn't make a difference. What matters is that the film remains true to the heart of the story, the camaraderie between the Ghostbusters, and the crazy, laugh-out-loud funny hijinks they get up to. Do me a favor? If you're a hater, stay out of the way, because the Ghostbusters are coming through and are about to light up the summer box office.

More like this
Reese Witherspoon Gave Fans Hope For 'Legally Blonde 3' After This Surprising Movie Inspired Her
By Jake Viswanath
At 28, Lesley Manville Was Acting, Picketing, & Singing Kate Bush Songs
By Olivia-Anne Cleary
Everything To Know About Netflix's Marilyn Monroe Movie 'Blonde' Starring Ana De Armas
By Grace Wehniainen
22 Movies On Netflix That Are Perfect For The Whole Family
By Bustle Editors
Get Even More From Bustle — Sign Up For The Newsletter