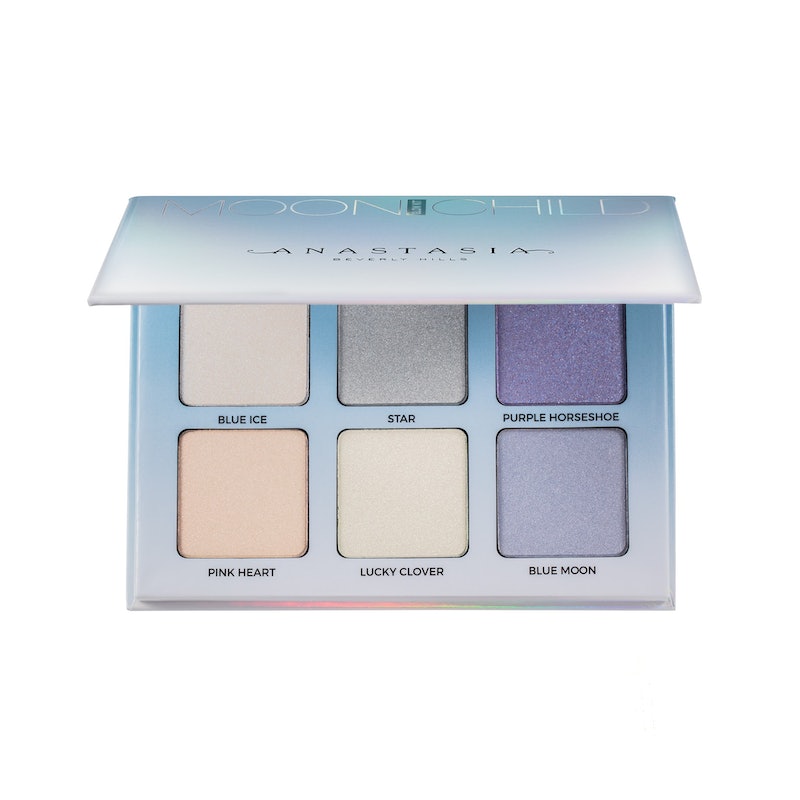 Anastasia Beverly Hill's basically made the Internet explode on Wednesday when they started teasing two new Glow Kits on their Instagram. The one that seems to be garnering the most attention though is Moonchild. So when does Anastasia Beverly Hill's Moonchild come out? Turns out that finding out the exact date is a bit more complex than discovering when ABH's Sweets Glow Kit comes out.

According to the Anastasia Beverly Hill's Instagram page, the Moonchild palette release won't be announced. Instead, the brand has decided to keep the time and date secret in order to prevent massive amounts of traffic to the site. Bustle, however, reached out for comment and can reveal that the Anastasia Beverly Hills Moonchild Glow Kit will release Thursday, July 7. That's right. You can get your hands on the latest kit only one day after its announcement.

Unlike it's fellow highlighter launch, the Sweets Glow Kit, Moonchild features not the typical four shades of a traditional Anastasia Glow Kit but a special six shades inside one compact. However, the two additional shades aren't even the only thing that set this Glow Kit apart. According to TrendMood, the formulations of four of the shades are Reflecks highlighters, a special formulation that features a reflective tone beneath pearl finish top shade. While the brand hasn't announced this change, the rumor is nonetheless exciting for its possibility.

The Moonchild Glow Kit appears is inspired by the character of the Childlike Empress in Michael Ende's novel The Neverending Story. Founder Claudia Soare herself explains that it was the visuals from the novel that inspired her saying, "I made this palette as a nod to the Childlike Empress and brightly-reflective visuals in the Neverending Story." In the stunning marketing campaign for the kit, Anastasia Beverly Hills even uses a quote from Ende's novel.

If the inspiration alone wasn't enough to make you purchase the palette, the fact that the Anastasia Beverly Hills Moonchild Glow Kit comes out Thursday, July 7 should. No more waiting for you. You're going to be able to snag this gorgeous, shimmering collection of icy blues, whites, and lavenders asap, and that's something to be excited about.