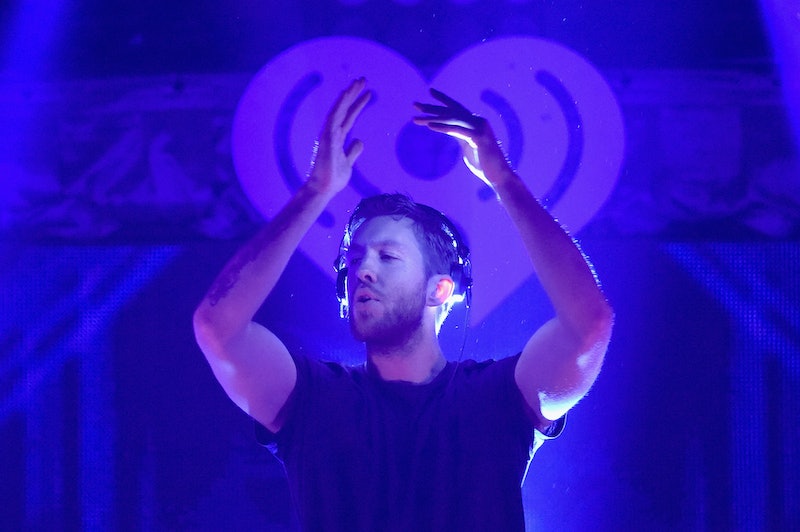 After news broke that Calvin Harris and his beau of over a year, Taylor Swift, were splitting up, it seems as though the question on how well they were both taking it wasn't even up for debate. That is — for about a day. Soon enough, Harris was deleting all signs of their relationship from Instagram, and reported to be working hard in the studio to release new, unspecified work. And now, it appears we know exactly what that work is: Harris' new track with John Newman, "Olé," has just dropped on iTunes, and though it's not clear whether or not it's truly about Taylor Swift and her new relationship with Tom Hiddleston as previously reported by other publiciations, it is clear that it's catchy AF. Of course, fans are going to be clamoring to listen to this one ASAP — so, it's worth asking, is Harris' "Olé" on Spotify?

Unfortunately, it doesn't seem to be just yet. Currently, "Olé" is only available for UK iTunes Store users to download — those of us across the pond will actually have to wait until Friday to hear the track on Spotify. This is according to vocalist Newman's latest tweet, which was also retweeted by Harris himself:

Clearly, Friday I am going to need to call in sick because I can't handle all of the questions this song has left me with. I mean, this is all just too much! Though it's not clear if the song is actually meant to be written from the point of view of Swift's new love Hiddleston as some theories have claimed, the lyrics are still mind-blowing. I mean, just look at these!

"I see online that you begun to be a good girl and take trips with your boyfriend. Being attentive, continue to pretend."

"You've hidden my name in your phone so you can call me to tell me you've been going through hell. Left him alone and you booked in a hotel."

"Low key you won't tell none of your friends about me."

"Low key"? Loki, Hiddleston's character in The Avengers?! There's so much to read into here, even if the song isn't actually about Hiddleston and Swift.

TMZ also reported that the video was filmed in Mexico last week, which may be true if this photo evidence is to be believed.

Whatever the story behind this track, here's hoping Harris takes a page out of Swift's book and delivers a full album soon. I need more of this!