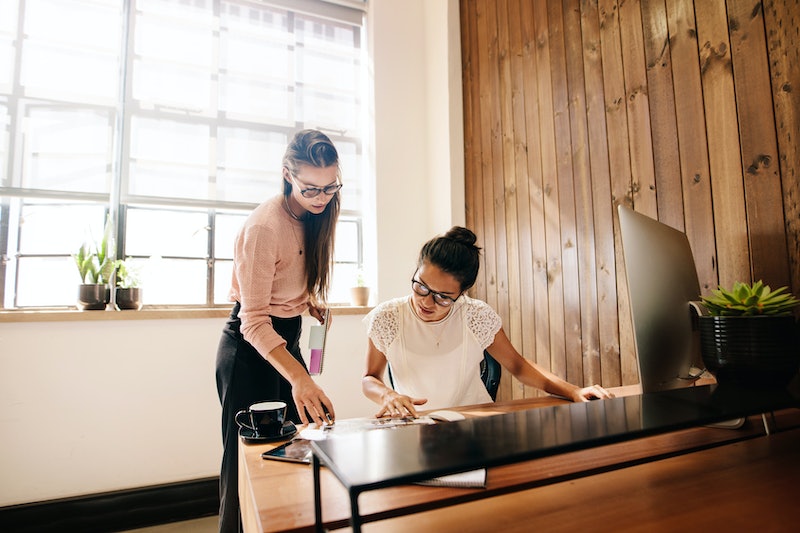 The workplace is one area where sexism is definitely alive and well. Women are less likely than men to get hired into STEM jobs, receive lower salaries for equally skilled work, regularly experience sexual harassment on the job, and often be considered too aggressive for speaking up in ways that men do without punishment. Women also experience a disproportionate amount of ageism at work.

How could women themselves be contributing to these? Women aren't to blame for the existence of workplace sexism, but they can perpetuate it. So, here are some ways in which women shame other women at work, often without realizing it. If you find that you might be guilty of workplace shaming — even the best of us have done it — but the first step to rectifying it is recognizing behaviors like these.

It's common for women job candidates to hear questions men wouldn't, like "how do you plan to balance work with family?" and "how did you end up in this field?" Asking questions that could allow you to discriminate based on gender is not only insulting but also potentially illegal, so it's important not to make any assumptions about a job candidate based on gender.

2. Counting Negotiation As A Point Against Women

We don't usually realize we're doing it, but people actually have a tendency to view women — and not men — more negatively when they negotiate their salaries. One study in Organizational Behavior and Human Decision Processes found that both men and women evaluated women who negotiated more negatively than men. For this reason, it takes courage for a woman to negotiate her salary, and even if a raise isn't possible, it's important to welcome these conversations.

3. Telling Women To Be Less Aggressive

Speaking to co-workers in a respectful manner is, of course, important in any workplace, but sometimes our standards for respect differ based on the gender of the person speaking. According to the survey Elephant in the Valley, 84 percent of women in the tech industry have been told they were too aggressive. This is likely in part because we expect women to be passive and docile, while anything else feels threatening. It shouldn't.

4. Telling Women To Be More Aggressive

Telling women to speak up can be as harmful as telling them to tone it down. Well-intentioned women often advise other women not to apologize, use up-talk, or say words like "like," but these verbal habits can have value and are often misinterpreted and policed simply because they're primarily used by women. If a woman isn't acting assertive, it's probably because she's been penalized for doing so. It's this tendency to penalize that should be attacked, not her.

Women get a number of backhanded compliments at work, including "you've done such a good job balancing your work and family" and "you're really good at that for a woman." While these may be aimed at praising someone, they actually insult women as a group and therefore insult the person receiving them.

6. Telling Women What To Wear

Women are disproportionately criticized at work for what they wear — and it's often other women policing them. For example, Elizabeth King writes in xoJane that her supervisor told her to wear heels and commented on her weight. This kind of behavior undermines women's jobs and reduces them to their looks, which is something women deal with way too much already.

More like this
25 Inspiring Quotes From Black Women To Celebrate Black History Month
By Kyli Rodriguez-Cayro and JR Thorpe
24 History-Making Black Women You Probably Didn't Learn About In School
By Ayana Lage and JR Thorpe
Twitter Is Identifying With Sally Field & Jane Fonda’s Friendship In New Viral Video
By Jake Viswanath
TikTok Has A Genius Old School Hack For Saving Money
By Sophie McEvoy
Get Even More From Bustle — Sign Up For The Newsletter
From hair trends to relationship advice, our daily newsletter has everything you need to sound like a person who’s on TikTok, even if you aren’t.