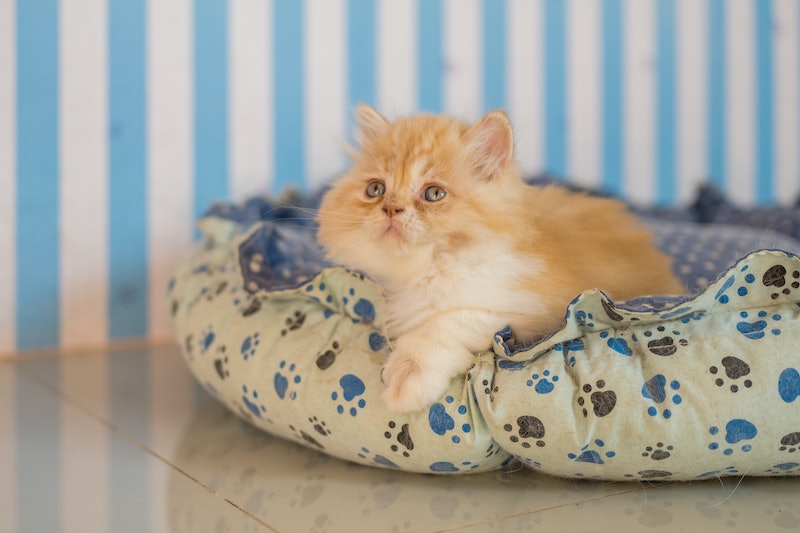 In a sea of depressing scientific studies reminding us that humans are all doomed to die eventually, a beacon of hope has emerged: According to recent research, cats are living longer, healthier lives than they used to 50 years ago. Of course, that doesn't really do much to mitigate the reminders of your own mortality, but who cares if there's no way to halt the slow approach of death? At least we'll be surrounded by (and preferably petting) geriatric kitties in our old age.

In two papers published in this month's Journal of Feline Medicine and Surgery, researchers looked at aging in cats. The good — dare I say absolutely fantastic? — news is that much like humans, improvements in healthcare and diets have extended the life expectancy of the internet's favorite animal. Today, it's not unheard-of for cats to live until their late teens or even early 20s, and researchers estimated that more than 20 percent of pet cats in the United States were 11 years old or older in 2011. (Here's a bit of trivia to impress/bore people at parties: According to IFL Science, a 21-year-old cat is approximately equivalent to a 100-year-old human.) Clearly, this calls for a celebratory cat GIF.

Unfortunately, the study also draws attention to some bad news. Cats are living longer, but not much is known about what healthy aging looks like. To provide resources for veterinarians, researchers from a number of institutions put together a review of existing research on aging in cats, which they then published in Feline Medicine and Surgery. "An appreciation of normal aging in cats is critical from both a clinical and research perspective. In this regard, it is imperative to be able to distinguish between what would be considered 'normal for age' [versus] unhealthy aging changes," they wrote.

The review is exhaustive, to say the least; over the course of 18 pages, it lays out things that are considered normal aging — some weight loss, a shabbier coat, and so on — as opposed to signs of disease. In an editorial accompanying the paper, researchers added, "Although we provide a thorough review of the current knowledge, it is clear that there is a great need for better understanding in this area."

You can check out the study for yourself here — if you have a cat, it's an informative read. Now go pet your kitty and enjoy the knowledge that they'll be around for quite a few years to come.

More like this
21 Absolutely Adorable Christmas Gifts For Dogs
By Carolyn Steber
If You Have Pets, You Probably Don't Realize You're Making These Common Mistakes
By Mackenzie Edwards
The 5 Best Pillows For Acid Reflux, According To A Sleep Expert
By Maria Cassano
Here’s Your Daily Horoscope for December 7, 2022
By Mecca Woods
Get Even More From Bustle — Sign Up For The Newsletter