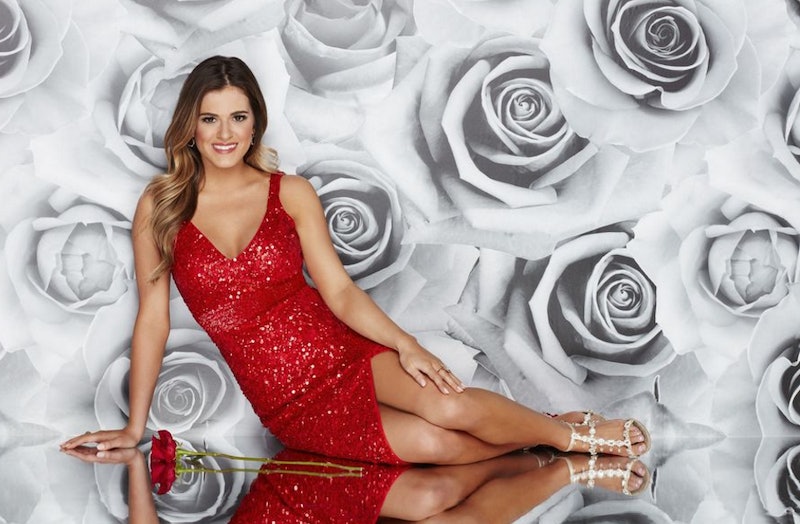 When I found out that JoJo Fletcher was going to be the star of her own season of The Bachelorette, I was so excited. My heart really broke for her at the end of Ben Higgins' season of The Bachelor and I wanted to see her on TV again. But now that I am watching her season, I have some conflicting feelings. Yes, I am enjoying the show and I am happy that she is back as the Bachelorette, but it's hard for me to tell if she should really pick any of these guys. When it's time for the finale, I'm starting to think that JoJo should just choose herself.

The 25-year-old real estate developer keeps saying that she typically goes for bad boys and that she wants to break away from the habit, but that doesn't really seem to be working out for her. After all, she kept Chad around for way too long.

Then there's the clear front-runner, Jordan Rodgers, who had a short-lived pro football career and has a famous older brother, so a lot of people suspect that he is "not there for the right reasons" and is just garnering exposure from the reality show. There were also rumors about him cheating on his ex, which JoJo confronted him about on the show and which he denied.

JoJo does seem to be really into Robby, but there are rumors about him having a shady romantic past, too. People even accused Robby of having a girlfriend while filming the show, which really isn't something that would make anyone feel secure when looking for a boyfriend, even though he has denied this.

JoJo keeps talking about her hot passion with Luke, but they only get to that point during established one-on-one time. He doesn't really seem like he's fighting for her in any group setting like the dates or at the pre-rose ceremony cocktail party. Why would JoJo want to date someone who she can only connect with when they are alone? Luke is super quiet, but he really is a sweet guy with genuine intentions, so it's sad that JoJo's penchant for the bad boys probably indicates that she will not be choosing Luke.

There just don't seem to be many realistic contenders for a long-term relationship in this bunch of dudes. I am so #TeamJoJo, so I really hope I'm wrong about this, but I think she can do better than this cast of men when it comes to finding her future husband. It would be great if one of these dudes ended up surprising me as a viable option, but I'm not holding my breath for it.

On top of the lack of options, JoJo mentions Ben all the time and it's a little much for me. Maybe she should have taken a year off before returning to reality TV or dating because she still seems hung up on her ex. I know that she started filming her season immediately after Ben's season ended, so I just feel like it might have been all too soon.

Every time I see any previews for the rest of the season, I am beyond concerned for my girl. It is a total cry fest and, apparently, JoJo tells one of the men that what he did to her "wasn't right." She also says, "Coming into this, I wanted to find love and I found it with a man that will not be able to love me in the way I said I wanted to be loved." This hints to me that maybe she should just take some time off to be alone or meet someone in the real world instead of picking someone due to the pressure of being on this show.

Don't get me wrong, I like JoJo and I am definitely rooting for her to find love, but this might not be the time. Maybe she can come back for a round two of The Bachelorette in a couple years?