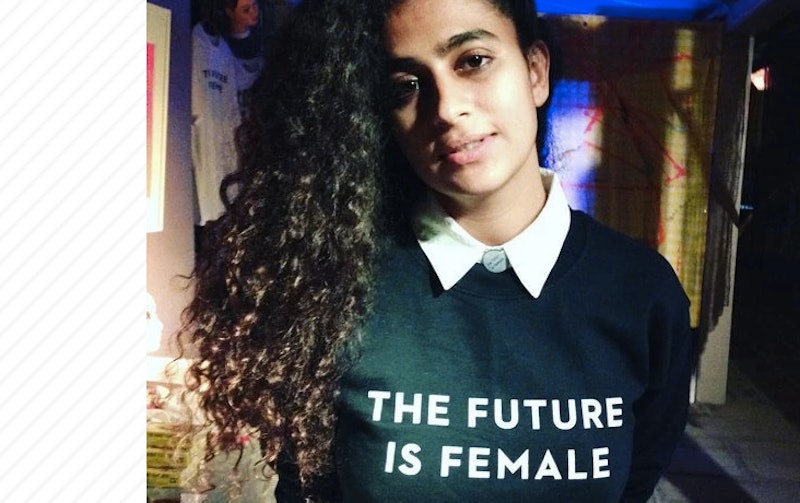 Much has been argued about the merits of so-called feminist fashion since the birth of fourth wave feminism. Does stamping a message of "girl power" on one's chest further sentiments of intersectional gender equality, or does it make contemporary feminism and its predecessors nothing but a passing fad akin to off-the-shoulder tops or oversized dungarees?

To a degree, the answer likely lies in personal comfort. If fashion, to you, feels like an inherently exclusionary industry (an ideology with plenty of evidence to back it up, TBH), then perhaps it's not meant to be the vehicle of choice for the expression of your feminism. But if your fashion is political — a means with which to advocate for the body, gender, or sexual visibility and representation you feel you deserve, then maybe making some feminist fashion statements, even if via small details, could be a worthwhile utilization of fabric and thread.

The latter isn't to say that you have to wear T-shirts emblazoned with "I AM A FEMINIST" on a daily basis (though you certainly could, of course). Rather, that clothing can be used, at least in part, to counter the anti-feminist or anti-fat or anti-queer messaging so prevalent in contemporary culture at large. If this sounds of interest, here are a few small ways to wear your feminist values on your sleeve.

Pins are a rather literal small way of making a statement. If you believe that weight stigma and diet culture are inherently feminist issues, repping an anti-body-hate message might just be the way to go.

Diet culture undoubtedly affects most humans in Western cultures and beyond, but the reality is that certain body types remain regarded as "ideals" while other are vilified and ostracized by their cultures at large. Rocking these pins if you identify with a body type that's been particularly marginalized due to its fatness, for example, will be a radical yet subtle affirmation of your beliefs.

Chances are that few passerby will be able to tell what it is your earrings are showcasing, but you'll know. The fight for women's autonomy over their bodies is far from over, but the social changes birth control pills have helped facilitate since the first oral contraceptive pill was approved in 1960 are immeasurable.

As explained by Letty Cottin Pogrebin, founder of Ms. Magazine, on CNN, "It meant involuntary pregnancy could no longer be used as threat or punishment for female sexual activity. It gave us the power to decide if and when we were physically, emotionally, and financially prepared for the immense commitment to bear and raise a child. It helped us plan and space our families. It helped us plan and build careers, or just keep our jobs. (In 1962, employers could, without penalty, fire a woman who got pregnant.)"

From reducing unwanted pregnancies to ensuring that sexuality and reproduction needn't go hand in hand, oral contraceptives have liberated many a woman, and continue to do so today.

3. Voice Some Hope For The Future

The Future Is Female Sweatshirt, $50, Otherwild

When I first saw this slogan, I didn't take it as a proclamation of the desire for matriarchy. Rather, I interpreted it as a hopeful mantra: One suggesting that, someday, history will also be herstory. Women and feminine people will have the same opportunities as their male . They won't have to fear corrective rape or rape as punishment in developing nations. They won't have to watch as their abusers receive a bare minimum sentence after assaulting them. They won't have to make 79 cents to a man's dollar.

Plus, 25 percent of proceeds of this jumper will go to Planned Parenthood, as per the brand's product description. Even if folks who encounter you in your statement top don't realize this, you'll know that you contributed to an organization that has been offering women healthcare (and particularly reproductive healthcare) for nearly 100 years.

Don't believe that blue equals boy, pink equals girl, and no other gender identities or color preferences can exist in this world? Why not rep your dissatisfaction with binaries through a simple statement tee?

To make matters better, 25 percent of this T-shirt's sales will go to The National Center For Transgender Equality. Ultimately, you don't need to have been assigned female at birth to identify as a woman or feminine person. Unfortunately, much of society has yet to grasp this concept, and violence against transgender women, and especially transgender women of color, remains horrifically high. Support your fellow women, your fellow sisters, by aiding an organization that works daily to help them.

Intersectionality matters, and yet it is still very infrequently discussed. If you understand that, while all women are subject to misogyny based on their gender alone, the scale of marginalization increases at the intersection of identities (fat and female; black and female; black, fat, and female; differently-abled and female; fat and transgender), you can make a statement through something as simple as a button.

Being cognizant of one's privilege while reinforcing intersectionality does not mean that you are undermining your own experiences, or those of others similar to you. It simply means that you are recognizing why your experiences should not be the core of a conversation. As Melissa A. Fabello, Cathy Bouris, and Kaitlyn M. Forristal wrote on thin privilege for Everyday Feminism, "When folks push for more conversations around thinness (and generally, a very specific type of thinness at that — that of white, middle class, feminine, cisgender women) to happen, they’re further silencing the harder conversations we need to be having as a movement."

Do you have a feminist role model in your life — someone who's been of particular value on your own journey to inclusive, progressive thinking? Why not sport their visage on your bod? A tote bag is one easy way to do so without having to go all-out with your wardrobe.

"Frida Kahlo is probably the most famous female artist in the history of the world. She transcended everything — her time (the first half of the 20th century, not exactly a time of great opportunities for women anywhere), cultural norms (her work dealt explicitly with taboo subjects such as abortion, miscarriage, gender inequalities, and the personal and sexual lives of women), feminine beauty ideals (not only did she not remove her unibrow or faint mustache, she was known to darken them with a black pencil), and her own physical limitations (she had polio as a child and was severely injured in a bus accident as a teenager). In an oppressive and repressive political and social climate, she was an outspoken leftist, a feminist, and a fighter for equality."

Proudly representing the individuals whose feminist gravitas has most impacted you is one surefire way to spread the word. Plus, a cute tote such a this one will be the perfect conversation-starter.

OK, so you may not be able to free the nipple IRL given the current social climate. But if you don't believe that the nude female form deserves to be inherently sexualized simply for existing, you could definitely free those nips on a cute hat. I'm a firm believer in the notion that folks need to be confronted with their prejudices in order to ever move past them. There's nothing automatically wrong, disgusting, immoral, or uncouth about a boob, and we must keep proclaiming as such.

There's no reason your small feminist statement can't translate to an actual small person. Ruth Bader Ginsburg, the second female Justice in America, has been fighting for women's rights for decades. Your baby, regardless of their gender, deserves to know all about her.

Ginsburg's memoir, My Own Words, which is set to be released in Jan. 2017, will undoubtedly hold many a gem — and perhaps some insight into her work as the first female professor to be hired with tenure at Columbia University School Of Law, her role with the American Civil Liberties Union, and her advocacy for Congress' passing of the Equal Rights Amendment. In the meantime, however, your little one can represent in the most glorious onesie to have ever existed.

Your small feminist fashion statement doesn't have to be coated in words or terms or images. One of the most glorious tools for the movement lies in women supporting other women. Or in this case, supporting feminist brands.

Plenty of indie companies — such as Ready To Stare, Smart Glamour, and Chubby Cartwheels, to name a few — are paving the way when it comes to offering inclusivity and representation for marginalized identities. The owners and designers of these retailers are also unapologetically vocal about their own feminist values. By supporting them, you are putting your dollars into companies — and individuals — who work for the messages most important to you.

Much like it can often feel intimidating, if not downright scary, to move through the world as a woman or feminine person, representing feminism through fashion might also feel risky. The fight for equality has been a long one, and it is far from over. After all, "feminism" remains a dirty word in the minds of many: Code for extremist misandry, perhaps.

But if you want to showcase your political values nonetheless, hopefully these small style statements will help along the way. You can go as subtle or bold in your sartorial expression of feminism as you'd like. After all, freedom of choice has always been part of the package.