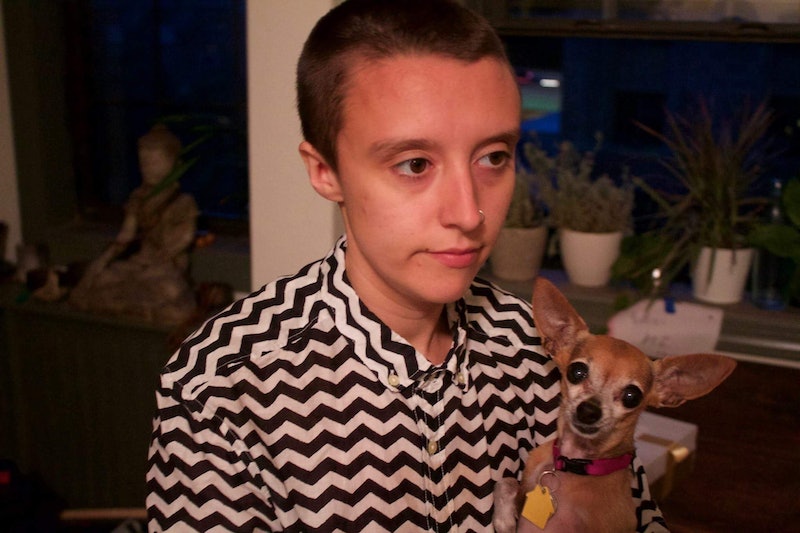 Recently, I shaved my head in the name of gender liberation and out of frustration over my former asymmetrical 'do. And in the following weeks, I'm beginning to see all the effects of this choice. So far, I know that getting a buzzcut has made hair maintenance way less exhausting, saving me tons of money on products and special conditioners for color-damaged locks. The new cut has also made me feel way more comfortable in my skin, allowing me to embrace a masculinity I hadn't formerly felt entitled to. But one result that I had not previously considered was the way short hair would reform how I feel and am perceived on the street.

As is the case with many feminine individuals, walking down a street alone can be terrifying. The loud catcalling and sexual advances of strangers closing in on me at every corner and curb keep my body in a constant state of anxiety originating from a history of sexual assault: So much so that when men walk too close to me — or even when pushy salesmen make physical contact — I shove or hit them as an (involuntary) protective reflex.

Over the years, I've noticed my issues with street harassment reduce based on how revealing an outfit is or whether I'm wearing makeup on any given day. To keep myself protected and unprovoked, I normally adjust my look to optimize safety when traveling home through the city. It's unfortunate and frustrating, but very necessary (for me, at least).

However, once I stepped out of the house for the first time in my new buzzcut, I noticed an unmistakeable shift in my favor. As I walked my small pup down our busy block for her afternoon pee, not a single dude looked in my direction. And if they did, it was for an extremely short period of time; their attention feeling rooted in human curiosity and a desire to assess my cute pooch more than anything else. As someone who has felt re-traumatized again and again on this very street by preying individuals, this felt like a huge win.

I had been presenting in a super masculine way that day, however, so I decided to put the theory that my haircut had made me safer to the test by rocking a crop top and miniskirt on the next. Between my mane (or lack thereof) and the newfound confidence I carried myself with, I didn't receive a single inappropriate comment from anyone. Leering that usually made my skin crawl transformed into questioning glances at worst, and an overall sense of peace within myself at best.

Feeling safe in my body while in transit is absolutely essential to my recovery from trauma — something that has been difficult to make progress with when sexual predators so often seemed to be in my vicinity. That said, it is extremely disheartening to know that women and feminine people often feel so much safer when they abandon stereotypical feminine traits like long hair.

My good friend Winnie, who also recently buzzed her locks, encountered the same reactions as I did. Having been catcalled for years, she found that not wearing shorts kept her feeling safe on the streets (a travesty for the summertime). "But now that my hair's really short," she tells me in a text, "I don't get catcalled anymore and I wanna buy a bunch of pairs!" In fact, we both rock short skirts whenever we please now without being hassled from randos on the corner.

My partner and I were also discussing this phenomenon as we traipsed about the city recently, wondering if it was the masculinity, the confidence, or both that were keeping the creepers away. At one point in the day, we were waiting in line at a Soho coffee shop to use the bathroom. My partner told me afterwards that they were surprised to see me smiling when they left the single stall restroom to let me in. "Usually as soon as I leave you alone for five seconds, some guy's being a total creep to you," they said. And it's true.

When Skylar and I are in the city together, I'm usually sexually harassed the moment they leave me to go to the bathroom or order some food. But this time, my buzzcut, newfound self-love, or some combination of the two completely repelled any and all attention, leaving me to my thoughts in a way that I (and every feminine person) am completely entitled to regardless of my hairstyle. For that reason among others, Skylar and I are eternally grateful for my shaved head.

Together, we wondered if long hair was somehow more attractive across the board to cishet men and guys prone to street harassment, or whether or not shorter locks conveyed a toughness that longer ones just don't often do.

Regardless of the reasoning, I'm endlessly pissed off on behalf of my longer-haired counterparts, since it seems as though sexual harassment is more prevalent for women presenting in a classically feminine way. Of course, any feminine or marginalized human (including those with short hair) can, and do, experience harassment and catcalling. But it's important to interrogate the ways we interpret femininity and sexuality, and place more negative attention on longer-locked women than their buzzed counterparts.

Ultimately, we all deserve to wear the skirts or shorts we love so dearly without fear of repercussion. And we shouldn't have to shave our heads to gain that freedom.