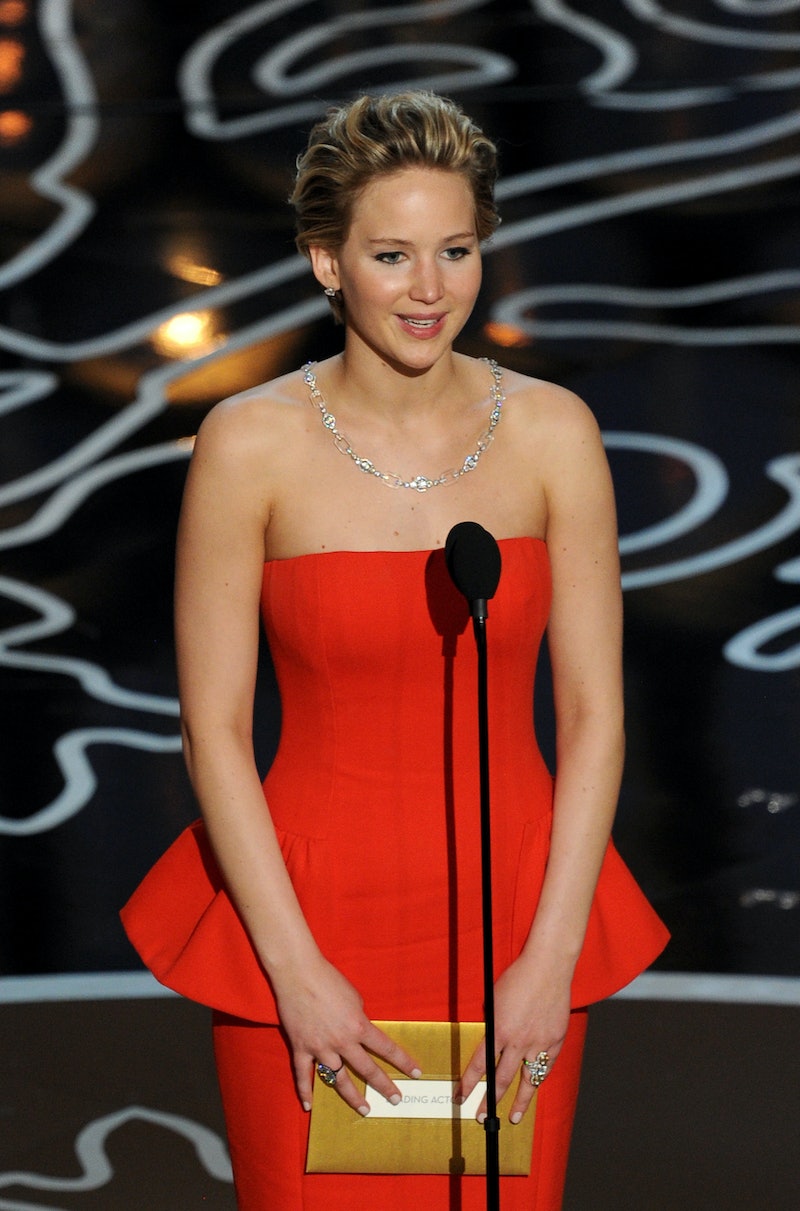 It's two days after the Oscars, and there's still a number of burning questions that we want answered. What's really going on with that 12 Years a Slave feud? Why did Cate Blanchett tell Julia Roberts to "suck it?" Where was Andrew Garfield? And who was Jennifer Lawrence talking to when she said "why are you laughing?" While most of those questions are still lingering, the Lawrence one finally has an answer — and it's just as good as you'd expect.

To refresh your recollection, Lawrence walked on-stage to present the award for Best Actor, and immediately turned to her left. "Why are you laughing? What? Is this funny?" she asked. Although Lawrence continued on with her presenting duties just a moment later, the question of who she was talking to — and what he/she was doing — was never answered. That is, until Best Actor winner Matthew McConaughey entered the press room backstage.

"She was talking to Jared [Leto]," McConaughey explained when a reporter, assuming that he was the subject, asked what Lawrence had meant by her remarks. "Ellen [DeGeneres] was on the side, and Ellen had earlier made the joke about Jennifer tripping last year. Well, Ellen was on the side when Jen was walking out," McConaughey continued, before proceeding to demonstrate that DeGeneres had been impersonating Lawrence tripping on stage.

"Jared was laughing at Ellen, so she [Lawrence] yelled over to Jared like, what?!" McConaughey said.

And the mystery was solved. Having McConaughey explain that Lawrence got "mad" at Leto for laughing at DeGeneres for impersonating Lawrence (woah, that was a lot) is just about a good an answer to one of the night's most pressing questions as we could've wished to receive. Hopefully, Lawrence won't stay "feuding" with DeGeneres and Leto for long; we like our Hollywood royalty starring in buddy comedies together, not fighting on the Oscar stage.

Watch McConaughey's backstage video below (skip to 5:45 for the Lawrence question):

More like this
5 Wild Theories About Miley Cyrus’ “Flowers” Music Video
By Jake Viswanath
Keke Palmer Shares The Sex Of Her & Darius Jackson's Baby
By Jake Viswanath
Who Is Allison Williams Dating After Her Divorce? She’s Engaged With A Child
By Jake Viswanath
Florence Pugh & Zach Braff Reflect On Their Relationship After Their Breakup
By Jake Viswanath
Get Even More From Bustle — Sign Up For The Newsletter
From hair trends to relationship advice, our daily newsletter has everything you need to sound like a person who’s on TikTok, even if you aren’t.