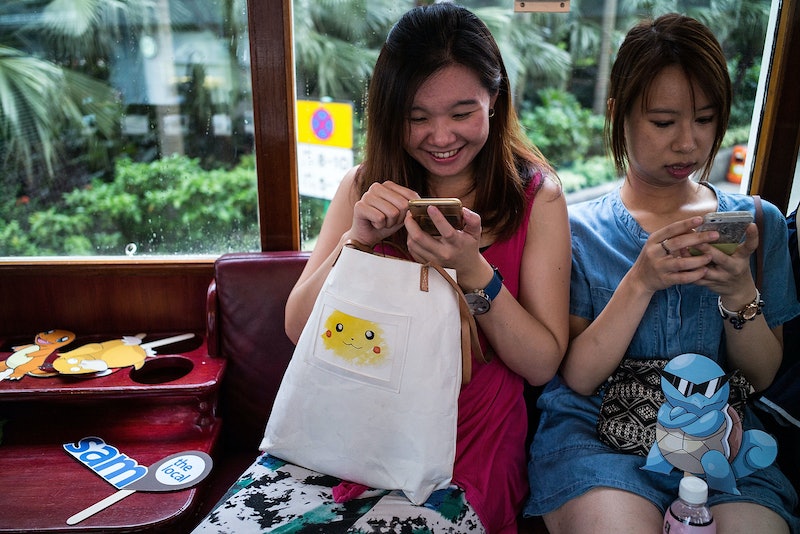 The recent release of "Pokemon Go" has taken many of us back to the '90s, when we first became obsessed with the cute little characters. All of the conversations we used to have flooded back to us in a rush: How can we collect more Pokemon? How do we make them stronger? What does your starter Pokemon say about you? It was a status symbol, really, even though we were just kids. I'll never forget seeing classmates compare their Pokemon cards in school — the kids with the most desired cards were special... popular... pre-teen royalty.

There have always been just a handful of starter Pokemon you could choose from at the start of each game, and "Pokemon Go" is no different. Each pocket monster has their own distinct personality, their strengths and weaknesses, and their own unique habits. Certainly, many of us fell in love with one specific Pokemon, which perhaps explains the wild popularity of Pikachu in particular. (More in that one later.) Still, it could get pretty hard to choose your starter back then, because all of the characters were just so darn adorable — and the same is true for "Pokemon Go" now. Squirtle? Charmander? Which should you pick? The fate of your Pokemon trainer hangs in the balance!

In fact, sometimes it felt like people chose their first Pokemon based on their own personality. So, what can you learn about a person based on the starter Pokemon they choose? It's not too difficult, really. It's like what some people say about choosing a mate: We choose someone that's similar to us. And sometimes, that "someone" is a Bulbasaur.

Let's take a look at what your starter Pokemon in "Pokemon Go" might say about you.

This red Pokemon is a lizard Pokemon with strong fire powers, as well as hidden solar ones. Its name is a combination of "char" (burned) and "salamander." The flame on its tail represents his health and emotions: The brighter it burns, the healthier, stronger, and happier your Charmander is. The fire goes out when it dies. You can find it in hot, mountainous areas, although it's much more likely to be working with a trainer. Charmander is more of a team player, favoring a pack mentality; for example, when it finds food, it'll call to others of its species to share in the bounty. Charmander evolves into Charmeleon, then Charizard, and lastly Mega Charizard.

Do you get hangry? Because that's what Charmander's tail reminds me of. If this is your starter Pokemon, I bet you and Charmander have something in common: It's easy to tell when you're not feeling too hot. Char's tail burns a little weaker, and you get cranky. Have a sandwich and settle down.

Bulbasaur is considered a grass or seed Pokemon — an appropriate name, considering it can survive for days on sunlight and nothing else, thanks to the bulb on its back. The bulb is planted at birth and grows as Bulbasaur grows, storing up energy from the suns rays. This Pokemon evolves into Ivysaur, followed by Venusaur.

Bulbasaur is considered the most peaceful of the starting Pokemon. They enjoy basking in the sunlight and relaxing. While they can be kind of lazy, they still have a lot of energy and prove to be loyal in battle. They prefer to move in herds and typically frequent grassy areas. Despite their calm demeanor, they aren't Pokemon to be messed with.

Peaceful? Loyal? Sun worshippers? Sign me up. This would definitely be my starter Pokemon. If you picked Bulbasaur, you're kind of like a ninja waiting in the shadows. People won't initially see your strengths, but if they cross you... look out!

Don't let this cute little one fool you: Its most powerful weapon is water. When they feel threatened, they retreat into their shells like a normal turtle; but they also shoot water from their mouths with immense force. Their shells not only provide protection — they also minimize friction underwater, making Squirtle an incredibly fast swimmer. Squirtle eventually evolves in Wartortle, and then Blastoise.

You must be sneaky, if you picked Squirtle. When you're intimidated, you appear to run and hide — but that's right before you emerge once again armed with your most powerful weapon and ready to fight. You carry a little bit of home close to you wherever you go, and you know it's because there's no other place you'd ever feel safer.

Pikachu is special because it's an electric Pokemon — and it's also considered the main Pokemon of the entire franchise. Aside from the lightning bolts on their backs and tails, they also have red circles on their faces that hold electricity. This electricity is their defense, in addition to their advanced agility and speed. In the beginning, Pikachu was a little deviant, ignoring orders given by his trainer and being quite difficult to win over. However, it changed its tune and turned into a rather loyal Pokemon. Pikuchu evolves in Raichu. In "Pokemon Go," it's a secret starter, so you have to work to get it.

Are you noticing a trending theme here? This whole thing is like the belief that dogs look like their owners. If Pikachu is your starter Pokemon, you must be a little troublemaker. You like to stir up trouble and cause some excitement; but you can't fool us: We know that on the inside, there's a lifelong companion just waiting to come out. You'll come around — we can feel it. Even if you have to do a little extra work to get there.