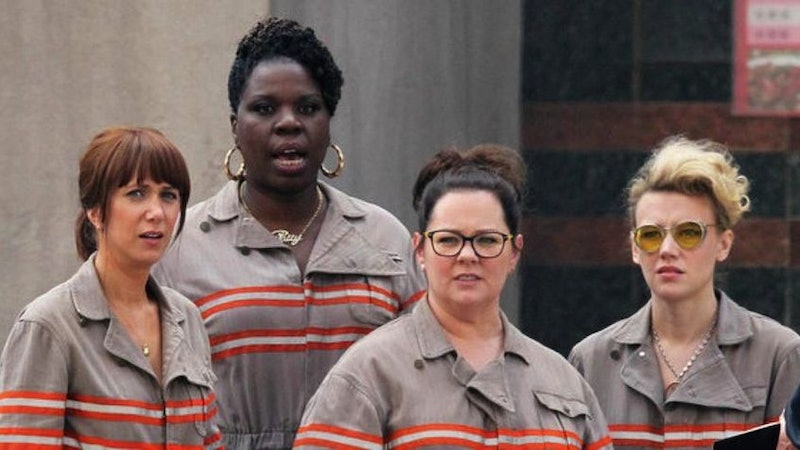 For nearly two years now, it's felt like all Hollywood has talked about has been the controversy surrounding the all-female Ghostbusters reboot. From the moment the new movie was announced, some so-called "fans" of the franchise took issue with the fact that women were playing the lead roles, calling the movie out for "ruining their childhoods" and starring actors of a gender they consider incapable of ever being funny. Although it was easy to laugh off the backlash as ridiculous, it was also sad to see how serious some of these critics were in their sexist beliefs that a female-led Ghostbusters was a terrible idea, with some using the excuse that a movie starring all women wouldn't provide role models for young boys.

"One thing I saw on Twitter was a lot was people saying, 'what are little boys going to look up to?'" Ghostbusters screenwriter Katie Dippold tells Bustle, speaking at the AOL Build & Makers "Celebrating Women Creators" event on July 11. "Like, 'when I was a kid, I got to look up to the Ghostbusters, what’s my son gonna look up to?' And it’s like, the new Ghostbusters?"

She laughs at the ridiculousness of the sentiment, but it's frustrating to think that there are people who believe boys are incapable of looking up to girls and women as role models or enjoying watching them on-screen. After all, young girls do the reverse all the time, thanks to the overwhelming amount of male-driven film and television available. These girls have no problem having male and female role models alike, so why can't boys do the same? It's important for them to see depictions of strong, powerful women on-screen and realize that action stars don't have to be exclusively male. "I want little boys to see it and look up to women heroes too," says Dippold.

Hopefully, parents will bring children of all genders to the movie, and everyone will get to see a group of badass women bustin' ghosts and kicking butt. There is something special, though, about young girls — who don't get representation on-screen nearly as often as their male peers — seeing this movie and realizing that they, too, can be action heroes someday. Already, images have circulated of little girls meeting Ghostbusters ' stars and staring up in awe at these ladies, something that Dippold says she absolutely adores.

"That picture really warmed my heart, because my whole thing has always been wanting more girls to grow up seeing more female camaraderie," she says, referring to one particular viral image, below. "I’d be a different person if I grew up watching that kind of thing, rather than just movies about finding a husband."

Thankfully, Ghostbusters exists, and young girls and boys alike are being gifted a movie in which women are smart, funny, badass action stars, people who are just as capable of bustin' ghosts and takin' names as any men.