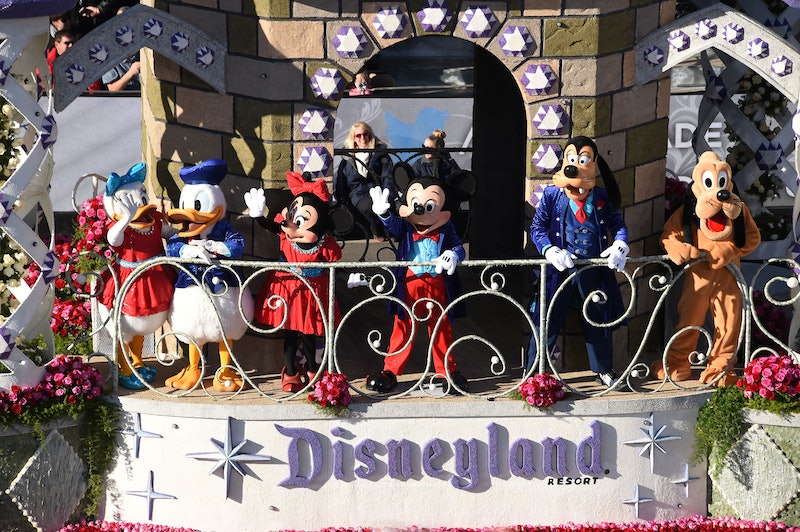 Over 60 years ago this week, on July 17, 1955, Disneyland first opened its doors, making it the first Disney theme park in the world. The opening day festivities at the then-160 acre park complex were broadcast on TV, and just like that, taking your whole family on a ride about an anthropomorphic toad with road rage issues became part of the classic American experience. In the decades since, the park — the only Disney property whose entire creation was directly overseen by Walt Disney, who died in 1966, a few years before the opening of Disney World — has expanded. It now covers 500 acres (including both Disneyland Park and Disney California Adventure), and experts estimate that around 14.5 million people visited the park in 2015. With that many pairs of eyes on the place, you might think that there can't possibly be much left to learn about it — but unless you were purposely focused on the tiny details of the park the last time you were there, there's still a lot about Disneyland that you probably missed (and admit it; you were not looking out for tiny secretive details the last time you were there. You were badgering your friends to "ironically" buy embroidered Mickey hats with you and we both know it).

Of course, if you're a Disney obsessive, none of the information in this article is probably news to you. But if you're someone who goes to Disneyland primarily to make ridiculous faces when they take your photo on Splash Mountain, get ready to have your mind/ novelty mouse ears blown away the fascinating Disney facts below.

1. The Jungle Cruise Was Supposed To Involve Real Live Animals

A great deal of the humor of the Jungle Cruise ride plays off the fact that the animals involved are animatronic — which almost wasn't the case. Walt Disney initially planned to have the ride to include real animals; however, the idea was scrapped after it was realized that many of the animals were nocturnal, and thus would be asleep when most visitors were riding.

But even after robotic animals were decided on, the ride maintained a more serious, zoo-like atmosphere for a number of years; it didn't become a hotbed for aspiring comedians (more on that next) until later.

2. A Number Of Celebrities Worked At Disneyland Before They Were Famous

Hey, it's near L.A. and it helps you prove that theater degree wasn't for naught, right? Steve Martin worked at the park's magic shop in the mid-50s, Michelle Pfeiffer played Alice In Wonderland in park parades in the '70s, and a pre-fame Robin Williams was employed as a Jungle Cruise tour guide. (Also, Kevin Richardson from the Backstreet Boys worked as a Teenage Mutant Ninja Turtle and Aladdin at Disney World in Florida in the early '90s — which, yes, is a completely different park, but it is almost never relevant for me to drop this fact into an article, so please, let me have this.)

3. There Is An Incredibly Expensive Restaurant Hidden Inside Disneyland (And You'll Probably Never Get To Go There)

Do you have a spare $35,000 sitting around? Well, instead of sending your future kids to college, may I propose that you spend it at Club 33, Disneyland's "secret" restaurant located in the New Orleans Square section of the park. The restaurant is members-only — so you'll be paying $25,000 as an "initiation fee," and $10,000 in membership dues every year. What do you get for all that cash? The potential to rub elbows with the club's famous members, the chance to dine under some mementos purchased by Walt himself as well as other Disney ephemera (like a harpsichord built for Disney's wife, Lillian) and, oh yeah — it's the only place in Disneyland where you can get alcohol.

4. Horses Inside Disneyland Sound Louder Than Horses Outside Of Disneyland

Everything in Disneyland is about reality ramped up a notch (or 10) — which explains why the footsteps of the horses pulling carriages in the park can be heard so clearly. According to Disneyland Secrets author Gavin Doyle, speaking to Business Insider, "The horseshoes have a special polyurethane coating to give them better traction and to increase the clip-clop sound as they walk the streets."

5. Walt Disney Had A Private Apartment Built Within The Park

When visitors enter the park, they pass through Main Street, U.S.A., a section of the park built to evoke Walt Disney's hometown of Marceline, Missouri. But most of those visitors probably don't know that they're also passing by Walt Disney's private apartment — a 500 square foot hideaway built over the Main Street Fire Station. Disney stayed there on nights when he worked so late at the park, he didn't feel like making the drive back to his home in Los Angeles. He turned a lamp on in the window on days he was there, so staff would know where to find him; in the years since his death, the lamp has been permanently illuminated in the apartment's window.

6. There's A Basketball Court Inside the Matterhorn

How do the people who work at Disneyland unwind? Run "It's A Small World" backwards so the kids all sound like they're possessed? As much as I would like that to be true: nope, they play basketball. The building housing the Matterhorn Bobsleds also contains a half basketball court inside the hollow upper third of the ride's mountain structure, set up for the people who work on the ride to get some R & R.

7. Special Colors Are Used To Draw Your Eye Away From The Boring Stuff In The Park

Think fast, hot shot: can you remember what color the garbage cans are at Disneyland? Probably not — because you're not supposed to. The garbage cans, like the administrative buildings and other stuff that is supposed to blend into the background of the Happiest Place On Earth, are painted neutral colors that have been dubbed "Go Away Green" and "No Seeum Grey" that are supposed to help them blend into the background.

8. You May Have Heard One Voice From The Haunted Mansion Elsewhere

Does Madam Leota, the fortune teller-cum-disembodied head who leads the seance at the Haunted Mansion, sound familiar to you at all? Her voice was provided by Eleanor Audley, who voiced other wicked Disney women like the Stepmother in Cinderella and Maleficent in Sleeping Beauty. However, that's not her face in the crystal ball — the visual version of Madame Leota is played by the appropriately-named Imagineer Leota Toombs Thomas.

Oh, and the deep voice that sings "Grim Grinning Ghosts," the ride's theme song? Thurl Ravenscroft, the same guy who sang "You're A Mean One, Mr. Grinch."

9. The Haunted Mansion Tombstones Are Named After Imagineers

A number of the people referenced on the tombstones that surround the Haunted Mansion were actually early Imagineers who helped develop the park.

10. Pirates Of The Caribbean Once Contained A Real Human Skeleton

No, I'm not talking about Keith Richards in the third movie — I'm talking about the Pirates of the Caribbean ride, which was once decorated with actual human remains. When the ride opened in 1967, prop skeletons didn't look very realistic — so the Imagineers went out and got some actual skeletons from UCLA Medical Center, and used them to decorate the ride's many grim tableaux. Eventually, all those skeletons were removed (and given proper burials) and replaced with faux skeletons.

11. You Can Eat All Of The Plants In Tomorrowland

I mean, don't actually eat them! Get a churro, man! But if you had to, you could — according to the Disneyland website, all the plants in Tomorrowland are edible because they symbolize futuristic sustainability concerns, "projecting an ecologically astute future, where humanity makes the most of its resources." "Makes the most of its resources" means "figures out how to make space churros," right?