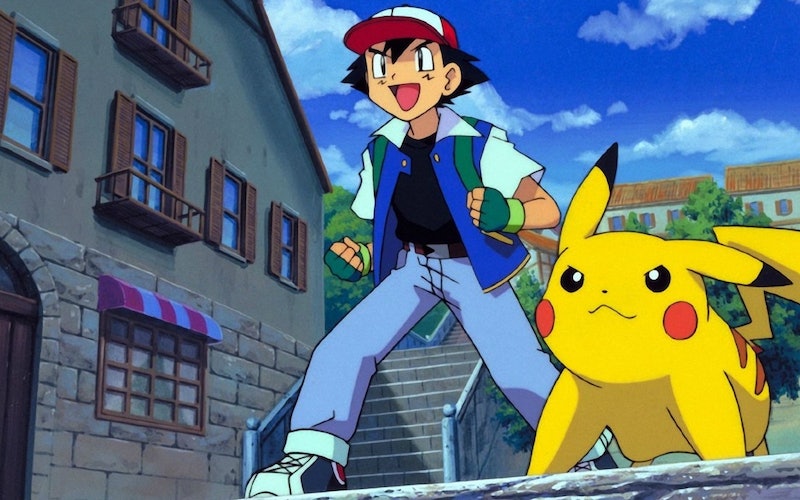 One of my most vivid memories of second grade was the few weeks my mom enrolled me in an after school Spanish program. The class wouldn't get out until 3:15 p.m., and as any self-respecting Pokemon-watching '90s baby knew, Pokemon aired at 3:30 p.m. Mind you, these were in the Dark Days before DVR, when you either relied on a very indulgent parent to pop a blank video into your VCR to tape something, or grimly accepted that you were going to have an episodic hole in a series until six months from then, when they all aired again.

But I was young, and not yet ready to accept that fate so easily. My mom promised me we would not miss any Pokémon episodes for the sake of enriching our linguistic minds, but she could not promise us that my sister wouldn't vomit in the minivan — subsequently forcing us to pull over in the school parking lot, shovel up the mess, and arrive home ... when the episode was over.

My little brain did not compute. I burst into the earnest, ridiculous tears that only a spoiled seven-year-old can cry, clutching to my binder of Pokémon cards (more meticulously organized that any of my schoolwork had been or ever will be), cursing the cruelty of fate. Eighteen years have passed since that grim day, and I can still tell you exactly which episode it was (Tower of Terror, the journey to Lavender Town where Ash has his literal soul ripped from his body after they wreck him with a chandelier — NBD), and exactly how long it took to air another time so I could watch it (six weeks, which is like, a decade in second grader time).

This was not an isolated incident. Throughout the next few years, Pokemon the television show and Pokemon the card trading game would be the cause of much prepubescent angst and triumph, so much so that I frequently think of my elementary school years as my Pokemon Era. Before there was Kanye, there was the Pokerap; before there were real adult responsibilities, there was your compulsion to get to Veridian City; and before there was "Pokemon Go," there was your faithful Gameboy Color, which you may or may not have once left on a plane and consequentially destroyed your entire social life by losing (help).

Which brings me to the point of this article: so much of Millennials' young lives were colored by the Pokemon experience, that is it no wonder we flocked to "Pokemon Go" in droves, skyrocketing it to the most popular app of all time in a matter of a week. And it is no wonder that Gen Z, the usual champions of apps and social media, has no idea what the hell is wrong with us. So it is for us, fellow Poke-people, that I write this — for there are some things Millennials will feel while playing "Pokemon Go" that other generations, particularly the younger ones, will never understand.

The Endless And Impossible Pursuit For A Pikachu

The time you've spent manically Google searching "where to catch a Pikachu in [your city of residence]" is about equivalent to the time you spent milling the grass outside of Pallet Town on Pokemon Blue looking for a wild Pikachu in the '90s (and then weeping when it ran away mid-battle).

The Irrational But Nonetheless Steadfast Allegiance To Your Team

I don't know any members of the Blue Team outside of my own office, but they are my brothers and sisters in arms, the same way Brock and Misty were to Ash back in the day. All your '90s #FriendshipGoals are coming to life, and they're so much more far-reaching than you could ever have fathomed.

How did I somehow forget that entire year of Spanish classes my mom made me take, but manage to retain enough knowledge of the 150 original Pokemon that even seeing the gray outline of one makes my brain go "oh, yes, a Nidoran" at the age of 25?

The Biological, Primal Urge To "Catch 'Em All"

It's like you're carrying around that carefully cultivated binder of yours (arranged either by type, strength, or general cuteness), except now it's all on your smart phone where you also conduct business for your job and text your mom and Snapchat your friend pictures of your weird zit. It turns out you're every bit as much the pack rat you were as a kid, but now it's slightly more affordable and compact.

Will there ever be anything quite like that uniting feeling of all your friends jumping in to sing that weird, guttural "WARTORTLE" in unison?

Like, yes, some dude walked into a pond catching a Zubat. And yeah, we're gonna laugh at him. But secretly we all know we are just one spotted Tauros with a high CP away from becoming so much viral fodder ourselves.

The Weird Backsliding Into Your '90s Baby Self

Does anybody all of a sudden want to eat Uncrustables and play with their Skip-It and listen to old A*Teens CDs on their Boombox, or ... ?

To be fair, my own mother is aggressively into "Pokemon Go" and I am proud to know her. But most of our parents, whose bank accounts shuddered through our aggressive Pokemon card collecting in the '90s, were deeply relieved that we eventually "grew out of it" — only to have Pokemon resurge stronger than a Rattata's Quick Attack.

The Automatic Kinship You Feel With Strangers

I talked to five different people I had never met also playing the app in New York within the first 12 hours of downloading it. I have not done such a thing since lurking in the Pokemon Store at the Bellevue Square mall in 1999.

... And Also The Unrepentant Gary-Esque Feelings You Have Toward Anyone Who Levels Up Faster Than You

The Genuine Concern You're Stuck In The Matrix

I'd say that next thing we know our Furbies will come back to life and finish the rest of us off, but we all know that that was in the cards whether or not all the rest of this happened. See y'all on the other side (GO BLUE TEAM).