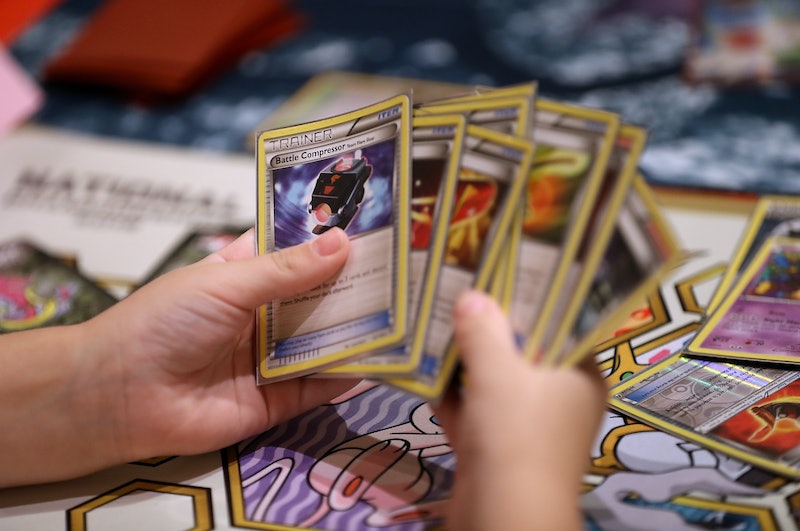 Today, emerging technology has given kids so many covert ways to entertain themselves in class. I mean, uh, besides learning — which is top priority, of course. When I was coming up in school, though, it wasn't smartphones being confiscated; the '90s things your teacher took away from you were a little more low-key, but every bit as distracting, no doubt.

I distinctly remember sitting in the back of the room during fifth grade geography class, because that's where the bookshelves were that housed my teacher's massive collection of National Geographic magazines. Hey, not only were they good for hiding notes, but they were honestly a solid read when I wanted to zone out during our daily state capitals lesson. So, yeah, I was no stranger to hearing teachers utter those four dreaded words: Bring. That. To. Me. From magazines to gadgets and everything in between, my elicit classroom inventory was expansive — and, if I do say so myself, rather impressive. Blame it on the decade! Every day there was a new fashion or fad that we just had to have. Who could possibly have waited until the final bell rang to indulge?

In full disclosure, sometimes it had little to do with anything other than the fact that we were easily distracted. By anything. And in retrospect, we probably should have paid more attention. But '90s kids will likely always fondly remember these frequently confiscated things... and maybe little else.

I mean, right? We didn't just pass notes in the '90s, we elevated note passing to an art form. We staged elaborate hand-offs, established complex heirarchies to get our notes from Point A to Point B, and we folded them into origami gossip. Alas, despite our best efforts, sometimes the teacher still managed to intercept our folded notes — then there was nothing left to do but pray to the gossip gods that she didn't read your letter out loud to the entire class.

We may not have had smartphones, but we did have calculators. What's so bad about having a calculator? That's a learning instrument, after all. Only, not so much when you mainly use them to spell out things like "BOOBS" using numbers and then snicker over them with your besties. Here's hoping the teacher wasn't savvy to our sophisticated calculator language.

Pokemon cards were considered a legitimate currency to '90s kids, which meant there was no way we weren't sneaking them in school to up our odds of scoring the perfect trade. Getting them snatched by a teacher was a minor setback, for sure, but even detention was worth it if it meant adding a Shadow Lugia to your collection.

Admittedly, when it comes to distractions, slap bracelets kind of took the cake. In addition to being the accessory to make a fashion statement in the '90s, these bracelets doubled as delightful contraband with which to play with during particularly monotone history lessons. Of course, the sound of the slap bracelet smacking tender arm skin traveled, so these guys weren't very discrete.

You know the drill. It was your job, nay your mission in life, to keep your Tamagotchi alive by feeding it and letting it out to poop. And, when it needed to do those things, it would alert you via loud, obnoxious beeping. How did your teacher not understand this delicate balance? Your Tamagotchi's cries for help would go untended in your teacher's desk until it was returned after class — emaciated and quite possibly close to pooping itself to death.

No lips could have been chapped enough to warrant the sheer volume of this sticky, sometimes glittery goop '90s girls shallacked on — ohhhh, you know — roughly every three minutes. If your teacher thought it was annoying, she should have talked to your mom: pulling clothes sticky with Lip Smackers out of the washing machine was the bane of her existence. They could've formed a support group.

These circular cardboard discs served no real purpose, AND I LOVED THEM. Like Pokemon cards, they were cafeteria currency — I wasn't above bartering Pogs strategically in order to snag a Surge or Hershey's Cookies 'N Creme bar. Come to think of it, did teachers ever return these? Maybe teachers' lounges were cover for a covert contraband bartering ring.

If you were lucky, you didn't have to rely on a calculator to send rudimentary messages to your besties (aka spell out "hell" and "boobs"). Rather, your parents were part of a rare consortium who decided to gift their pre-pubescent kid with a pager. Your teacher, though? She wasn't hip to your social status enhancing technology.