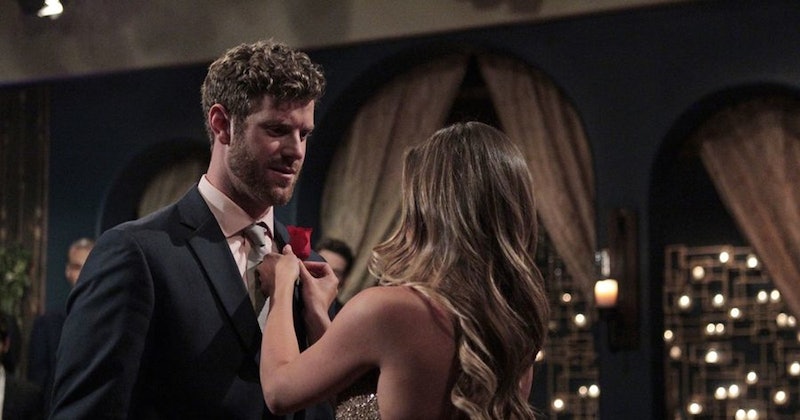 I feel like you're not going to like what I'm about to say, so just let me get it all out, and then I can explain myself, I promise. James Taylor shouldn't be the next Bachelor. I know, I'm a terrible person, but it isn't for the reason you think. I actually really like James; he's one of my favorites this whole season, and I was bummed to see him go home. There's just a line I have to draw. The 29-year old singer-songwriter from Katy, Texas, who was eliminated from JoJo Fletcher's season of The Bachelorette in Week 7, is already a fan favorite. He had a really great attitude about the whole process right off the bat, and I actually picked him as one of my early predictions for the next Bachelor, alongside Luke Pell. Honestly? That's part of the problem.

My entire issue with James is that I feel like he was set up from the beginning to be the Bachelor, groomed for the role throughout, and that JoJo never really liked him in that way. That speech when he left? Come on, now. I know they've kissed a bunch onscreen, so theoretically the chemistry should be there, but I've never felt it. From day one, their interactions have read less like attraction and more like friendship to me. Every round of eliminations that James has managed to survive has felt like a higher power was watching.

Think about it: James Taylor could not be more different than the other guys left. And I mean that in a good way. Breaking down the final six men that remained before the Jul. 11 episode, you have five hunky guys who all think very highly of themselves and come in aggressive for JoJo's attention, and one sweet, goofy James. Not that James isn't handsome, because he very much is, but he undeniably has a different type and look than Luke, Jordan, Alex, Chase, and Robby.

It's something even James picked up on, looking at himself, looking at the others, and then saying, "I don't get it." Unlike the other five, James is someone who admits his insecurities, and he did that repeatedly in his last few weeks on the show. He seemed to feel out of his element, and shocked that he'd stayed as long as he had. Whenever I see a contestant reacting that way, I think a) hey good for him, for being self-aware and honest about what he's feeling and b) something's fishy here.

So who do I want instead, you might ask? Well, my choice would actually be the second of my two early picks — Luke Pell. In every way that James has been set up to succeed and shine, Luke has done so naturally, and without the insecurity and self-deprecation we've seen from James. Like James, Luke has seemingly never felt the need to get competitive with his fellow contestants; in moments when the other guys are getting aggressive with each other, Luke is nowhere to be found. But, unlike James, Luke also doesn't seem susceptible to the other contestants' opinions of him. I'm thinking specifically of that bonus footage at the end of one of the episodes where they're trying to rib him about his side boob, and Luke just has such a sense of humor about it that they can't even successfully make fun of him.

And that's not even taking into account Luke's connection with JoJo. Whereas it's always felt more friend zone-y with James, with me surprised and baffled every time he survives another Rose Ceremony, JoJo and Luke have a connection that has been visibly building in passion and intensity every week. It's gotten to the point now where I feel like, "if she doesn't want him, I'll take him!" Which is exactly the vibe I think you should have for the Bachelor, rather than "he's a nice boy, I hope he finds what he's looking for."

Long story short, I could tolerate James Taylor as the Bachelor, because he's a nice boy and I hope he finds what he's looking for. But the person I could really get on board with is Luke, assuming that JoJo is as blinded by Jordan Rodgers as I think she is, and that she makes the mistake of kicking Luke off at all. I feel bad wishing for that to happen, but I really want a hot, confident, kind, intelligent, hilarious dude for the next Bachelor. While James Taylor checks off many of those boxes, I still think Luke has him in the end.