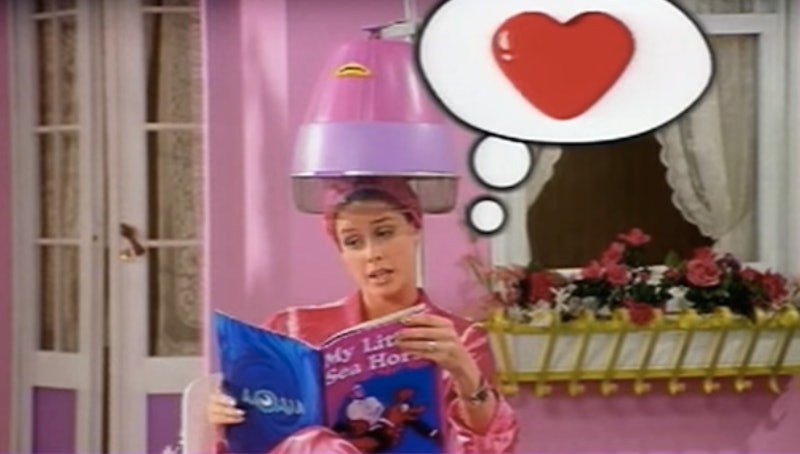 Let's be honest here, we all love our friends dearly, but sometimes there's some deeply personal information that even your best friend doesn't need to be privvy to. And one of those titbits of needless information is definitely embarrassing songs that you secretly love. As adults, it can feel liberating to confess anything and everything to your bestie, but as a kid there were just some secrets that could never be divulged. There were so many guilty pleasure songs of the '90s that we were, frankly, spoiled for choice when it came to songs that we may have secretly loved but wouldn't have been caught dead humming in public. No m'aam.

And there were more than enough reasons to feel red-faced over such songs back in the '90s. From songs so stupid that you really didn't want to be associated with them to deeply uncool artists who made you crumble with cringe, these were all likely '90s songs that you knew all the lyrics to, regardless and loved. Secretly and shamefully. There's absolutely no judgement here though, ladies. It's time to embrace that embarrassment, let go of that guilt and turn your stereo up so loud that your best friend can hear it from five streets away.

It was basically the song that all your friends claimed to despise (but they all owned the song on CD single).

And this is how you would listen to it: Lying on your bed, staring at a poster of Leonardo DiCaprio and still crying about the ending of Titanic. You friends did not need to know about any of that.

How would you even explain your secret love for this song to your friends? Like, "...but guys, it's about somebody who's blue. Maybe not emotionally, but physically. And that's worse, right? And it's really, secretly moving if you listen to the piano on it and stuff..." Nope.

Meat Loaf gave us about eight minutes of pure drama with this song, but that drama still could not compare with the levels of ribbing you'd receive off your friends as and when they found out how much actually loved it.

You were the Macarena dance champion at Summer camp, but back in your actual, real life? Nah, the Macarena is so lame, guys. Totally don't have that song etched into my very soul right now.

I'm embarrassed for everyone who carried the burden of loving this one-hit-wonder back in the '90s. Including myself.

Fun fact: Me and my friends were in such denial that we were secret Limp Bizkit fans that we even listened to the album over an entire Summer just to "laugh" at it. But, embarrassing or not, we totally loved them.

If you're anything like me, then you might have chilling memories of your Dad lip-syncing this and performing a snazzy dance routine to it at a family party. Somehow, it still wasn't enough to stop the song from becoming the earworm you didn't dare to tell anyone about.

Undeniable proof that sometimes the very worst songs are also the catchiest.

Your friends would never understand the appeal of line-dancing to this in your bedroom.

Particularly if you were all about Justin Timberlake up front (but all about Steven Tyler in private). That's an uncomfortable conversation that nobody should have to have with their friends.

"Hi Sandra, I can't come out tonight. I'm having too much fun throwing shapes in my bedroom to... er, actually, that information is classified."

Was it Dad rock? Was it country? Was it painfully earnest? Maybe, possibly and most definitely. But godd*mmit, it also spoke directly to your heart.

A great song it may be, but it was still an ode to a saucy piece of lingerie, and that was embarrassing as hell to be singing along to as a '90s kid.

Scatman John had skills, and anyone who says otherwise is a total loser. However, there's no denying that this song is also totally ridiculous and was deeply harmful to your street cred as a kid.

So beautiful. So heartfelt. So embarrassing if any of your friends discovered that you listened to it on a daily basis for an entire year. You could never reveal that you might have some, like, love feelings swirling around inside of you. Big mistake.

Thus announcing that your Dawson's Creek obsession had reached critical and cringe-worthy levels.

I will forever stand by the fact that this is simply a great song. And no amount of ridicule off my childhood friends can change that fact, OK? Good.

Just because you discreetly borrowed your Mom's copy of Shania's album (maybe a couple of times) totally never made you some superfan. No way. Nope.

Bad, rude, and pretty offensive, "The Bad Touch" was the song that every girl I knew hated and that every boy I knew loved. Was the song problematic? Completely. But it also had a tune that was infuriatingly catchy as hell (please don't tell anyone I said that).

Cher will forever be a goddess, okay? But, to '90s kids, admitting that they loved "Believe" was a death sentence of coolness.

Confessing to adoring this song often ended in your friends making smoochy noises on their hands and accusing you of listening to it whilst dreaming of Kelvin, the boy you denied being madly in love with, even though you totally were. Heartbreaking.

See? Now, doesn't that feel like a weight's been lifted? And with absolutely no regrets, either. These '90s songs might have been embarrassing but they were still worthy of all the love we gave them.