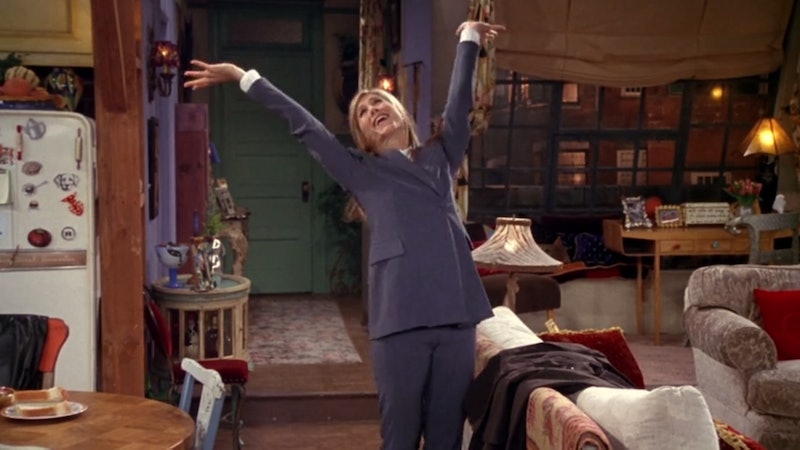 On Tuesday, The Huffington Post published an op-ed written by Jennifer Aniston titled, "For the Record." In her badass essay, Aniston expresses how she is "fed up" with the negative ways female celebrities are portrayed compared to male celebrities in tabloid journalism. She has a long history being in the spotlight and has far too often come under the scrutiny of the media, especially when it comes to body shaming and debates over whether or not she is pregnant. Her letter calls for action to end the objectification female celebrities face daily and the unhealthy example being set for women everywhere. Like most everyone out there, Rachel Green has "responded" to Aniston's op-ed, because she too supports the former Friends star for taking a stand.

As all Friends fans know, Rachel was a feminist — or that's what I choose to believe. She may have never come out and declared it openly, but her actions proved she certainly was all for gender equality. She was a great role model for female viewers and showed how important it is for women to take control of their own lives. Whether she was fighting for her career, ending unhealthy relationships to better herself, embracing her sexuality, or choosing herself over what someone else may have thought was best for her, Rachel was (and still is) beyond influential to women of all ages.

So, of course she would love Aniston's letter — and here's how she'd probably respond to it.

She'd Cheer For It — Literally

It's hard not to.

Her Reaction To Anyone In Disagreement

She'd Be Turned On

Supporting women and fighting for gender equality is pretty hot.

She'd Rejoice With Her Friends

Phoebe and Monica would love it, too.

She'd Relate In More Ways Than One

And she'd be empowered to make a change and fight alongside Aniston.

Really, how many more times does this conversation need to be had until change actually happens?

Her Most Obvious Response

More like this
15 Ways To Tell Someone Was Just Talking Behind Your Back
By Carolyn Steber
25 Questions To Ask Your Friends When You're Bored
By Lexi Inks
Sandra Bullock, Girlboss Extraordinaire
By Matt Harkins & Viviana Olen
Spice Girls’ Net Worth: The Richest Member Is Wealthier Than The Rest Combined
By Hugh McIntyre
Get Even More From Bustle — Sign Up For The Newsletter