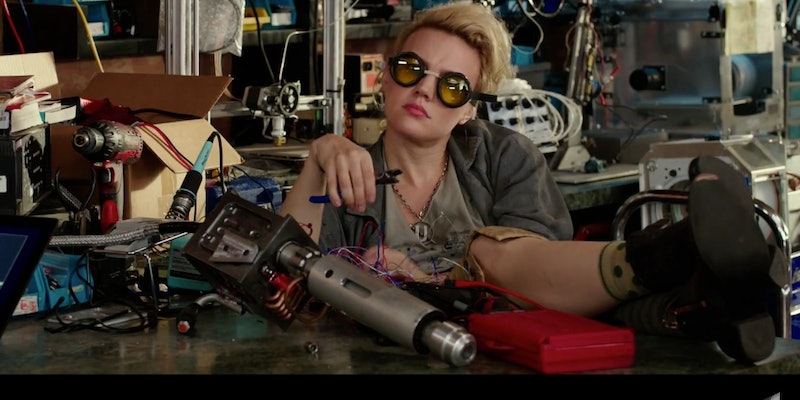 The cast of Paul Feig's all-female Ghostbusters reboot is a well-rounded set of comedy types. In Melissa McCarthy, Leslie Jones, Kristen Wiig, and Kate McKinnon, the movie includes a wide range of personalities and comedic styles. With Wiig taking on the "straight man" role, McCarthy embracing her signature physical comedy, and Jones adding her well-timed sarcasm into the mix, the only place left for McKinnon to go was into new territories of strange. And boy, does she get there. In my opinion, McKinnon's wacky Ghostbusters character Holtzmann is the highlight of the foursome, and her breakout performance should chuck the comedic actor into total stardom.

In the new movie, McKinnon plays Dr. Jillian Holtzmann, the techie geek of the bunch. Once the foursome is formed, "Holtz," as she's called, builds the groups gadgets, invents their proton packs, and comes up with new, dangerous, and exciting ways for them to defeat the undead. The best word to describe her would be weird; her bug eyes accentuating any off-kilter comments that come out of her mouth. With a wave of blond hair reminiscent of Egon from The Real Ghostbusters, the late-'80s cartoon series, and paint-splattered coveralls and gonzo goggles borrowed from Gadget from Chip and Dale's Rescue Rangers , Holtz is a cartoon-like, gender-fluid, sexually-ambiguous, ridiculous genius whose love of technology is as charming as she is.

The thing that makes McKinnon's Holtz stand out from the rest of the group is the fact that her comedic moments are untethered to the ongoing action of the rest of the movie. While Jones, Wiig, and MCarthy's dialogue and decisions stem from the ghostly scenarios they're in, Holtz acts like a walking non-sequiter. In one early scene, when the group is facing down their first ghost, Holtz pulls out a can of Pringles and starts to snack. When the other gals chide her for the distraction, she quips, "You try saying no to these salty parabolas." It might be a product placement, but when Holtz does it, it's just hilarious. McKinnon said in one featurette," This is the closest character to myself that I've ever played." So now we know what she's like in real life: bizarre, smart, and kind of addicting to watch.

It's also a bit strange that, of all of the characters in Ghostbusters , Holtz is probably the least developed of the movie. Wiig's character has the biggest arc, as she finds herself returning to beliefs that she once rejected. McCarthy and Jones both learn and grow in their new roles as a part of the team. But Holtz is the most underwritten of the quad. With no backstory, we're not sure where she came from, how she became a scientist, or how she teamed up with McCarthy's Abby, or even where she gets the parts for all of their devices. But the mystery makes the character even weirder and more enjoyable. And if McKinnon can make her character the standout star with the least to work with, that just proves that she deserves to skyrocket to stardom as a result of this movie.

McKinnon has certainly been a fan-favorite on Saturday Night Live in recent years. Whether she's playing German Chancellor Angela Merkel, a poor Russian villager, or Justin Bieber, McKinnon has become the female powerhouse on the weekend sketch comedy show. Just try and watch this sketch of her playing an alien abductee alongside a can't-keep-it-together Ryan Gosling and try not to laugh. Like many an SNL star before her, McKinnon deserves to make the transition from the series into films. But leaving SNL would mean leaving behind probably her most successful character, Hillary Clinton. And with Clinton's hopeful election this coming fall, any departure McKinnon makes from the show in light of Ghostbusters' success may have to happen during her tenure as president.

We'd certainly miss McKinnon's take on Clinton, but whatever McKinnon decides, be it sticking it out on SNL to bring us more great characters, or heading into film, we support her. Whether she becomes a leading lady, or an amazingly wacky supporting actor, more movies need hilarious and different characters like Holtz, and great comedic actresses like McKinnon to play them.