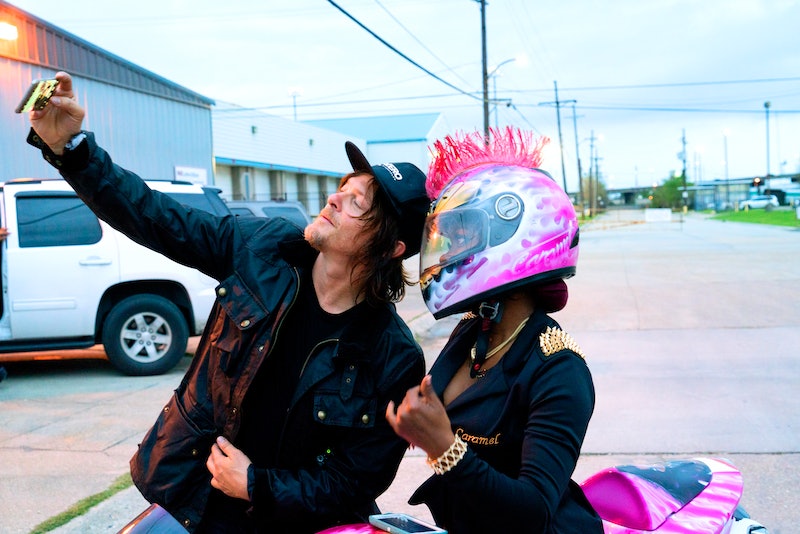 The Walking Dead is, in essence, a travel show. It's pretty much the most depressing travel show ever, considering the fact that the series takes place in a post-zombie apocalypse world and follows a band of survivors as they do whatever they can to evade the bloodthirsty Walkers, but you've got to admit that there's still a whole lot of wandering going on. Luckily, Norman Reedus, who stars as Daryl Dixon in The Walking Dead, got to flex his real travel TV muscles in his own show on AMC aptly titled Ride with Norman Reedus. But as the show approaches its Season 1 finale on Sunday night, I'm wondering if there will be a Season 2 of Ride with Norman Reedus or if it will ride off into the sunset for good.

I've got to pump the breaks on this one now. AMC has yet to announce whether or not Ride with Norman Reedus will return for Season 2.

However, Reedus did an interview with ComicBook.com earlier this month that should give you some hope. If Ride with Norman Reedus does get renewed for Season 2, he already has some ideas, including bringing fans of The Walking Dead along for the ride and traveling the world. Regardless of whether or not Ride with Norman Reedus gets renewed, the actor will be back as Daryl when The Walking Dead returns for Season 7 in October.

I know, I know; it's going to be a long few months without any Reedus in your life. If you're not able to spend them on your own getaway, consider checking out these adventure-filled travel shows to satisfy your wanderlust.

Before Reedus hitched a ride on his motorcycle to explore the great U.S. of A., a couple of other actors did the same around the world. Famous friends Ewan McGregor and Charley Boorman take a 115-day journey from London to New York on motorcycles in 2004's Long Way Round, and they did it again in 2007, traveling from Scotland to South Africa, in Long Way Down. These wild and beautiful series are both available to stream on Netflix now.

If you're looking for more celebrities and less motorcycles, The Getaway will probably be your jam. This onetime Esquire Network series, whose clips can be found on the show's official website and on Youtube, followed some of your favorite celebs on their vacays around the world, from Rashida Jones in London to Aziz Ansari in Hong Kong to Chrissy Teigen in Thailand. Watching The Getaway is probably the closest you'll ever get to having actual famous people as your travel companions.

Both the British (which airs on BBC America) and American (which airs on History) versions of Top Gear aren't just about cars. You also get to see a lot of sights around the world through those automobile windows. Now if only the drivers would just slow down a little so you could see the picturesque surroundings even better.

Anthony Bourdain may not ride a motorcycle or drive a hotrod in his former Travel Channel series Anthony Bourdain: No Reservations, but this show had just as much rock 'n' roll attitude — maybe even more — as the famed chef, author, and TV personality experienced the world's cultures through food. Full episodes of No Reservations are available to stream through Travel Channel's website, or you can check out his similar CNN show Anthony Bourdain: Parts Unknown on Netflix now.

So maybe you'd prefer a liquid tour of the world? Well, watch Travel Channel's Booze Traveler, and host Jack Maxwell will be your guide to drinking cultures around the globe. Cheers!

If you want to see the world and learn about its people in the most exhilarating way possible, The Amazing Race will give you the most bang for your buck. This CBS reality competition, which finished up its 28th season in May, follows teams of two as they complete challenges around the globe and hope to be the first team to the finish line and take home a $1 million prize. Check out The Amazing Race now, and you'll be rewarded with the upcoming Season 29 premiere on CBS.

But all the while, let's just hope that Reedus rides back onto AMC before we know it.