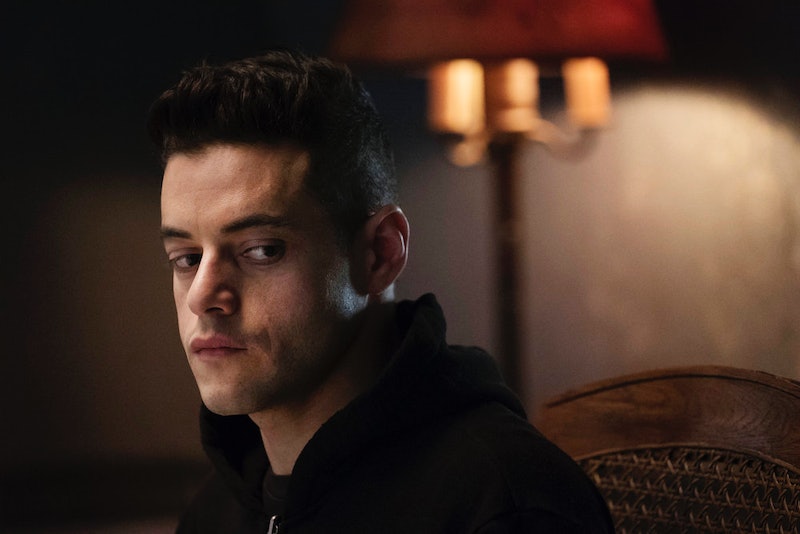 The Season 1 finale of USA's Mr. Robot asked a lot of questions, like… What will the world look like post-fsociety's Evil Corp hack? Who else might only exist in Elliot's mind? And who's knocking at Elliot's front door? The answer to the first question is: not great. The answer to the latter two is still TBD. But one of the biggest lingering questions coming out of the show's first season was: Where is Tyrell Wellick? The wannabe-CTO of Evil Corp disappeared at the end of the season's penultimate episode, last scene at fsociety's headquarters with Elliot and Chekhov's gun stashed in a popcorn machine nearby. Well, I'm happy to report that Tyrell is alive — even if his whereabouts are still unknown.

We still don't know what went down at the Fun Society arcade or if that hidden gun ever went off; but no matter what went down during Elliot's three-day blackout, Tyrell is still out there somewhere. He's got good reason for lying low, too. He's wanted not just for the murder of Sharon Knowles, but also for being the alleged mastermind behind the Five/Nine attack. (As we learn in the opening scene of the Season 2 premiere, he was the man in the mask in the video that was released on that fateful day.)

Though one serious possibility was that an unstable Elliot had murdered his archenemy, we got the first hints that Tyrell was still alive and kicking when Joanna Wellick received a mysterious gift: an ornate music box with a cell phone taped underneath it. (Unfortunately, Joanna missed a call from Unknown when she went to check on her crying baby.)

But it was a different phone entirely that confirmed the continued existence of Tyrell. After Elliot blacked out during his daily church group meeting (part of his routine to try to remain sane), he woke up back in his mother's house, clutching a phone to his face. Evidently Mr. Robot had taken over while Elliot snoozed and dialed a mysterious number. Who was on the other end? "Bon soir, Elliot."

Now, I suppose it's important to point out that this is Mr. Robot and we shouldn't necessarily trust anything we see or hear. The only person who talks to Tyrell in this episode is Elliot, and we know how messed up his mind is. Joanna never talked to her missing husband, we only know that someone was trying to call her from an anonymous number. Sure, we can put two and two together and assume this means Tyrell is alive… But should we?

Maybe Elliot was just imagining Tyrell's voice on the other end of that phone. For that matter, maybe Elliot has always just been imagining Tyrell — and they're really the same person! Now we're really starting to fall down the rabbit hole. We should probably just wait and see what next week's episode has in store for us.

More like this
Netflix Just Revealed When 'Never Have I Ever' Seasons 3 Will Premiere
By Gretchen Smail and Alyssa Lapid
'Games of Thrones' Fans May Recognise This 'Conversations With Friends' Location
By El Hunt
Betty Gore’s Daughter Honored Her After She Became A Mother Herself
By Brad Witter
50 Years After Creating Her Alter Ego, Angelyne Is Still Driving That Pink Convertible
By Gretchen Smail
Get Even More From Bustle — Sign Up For The Newsletter