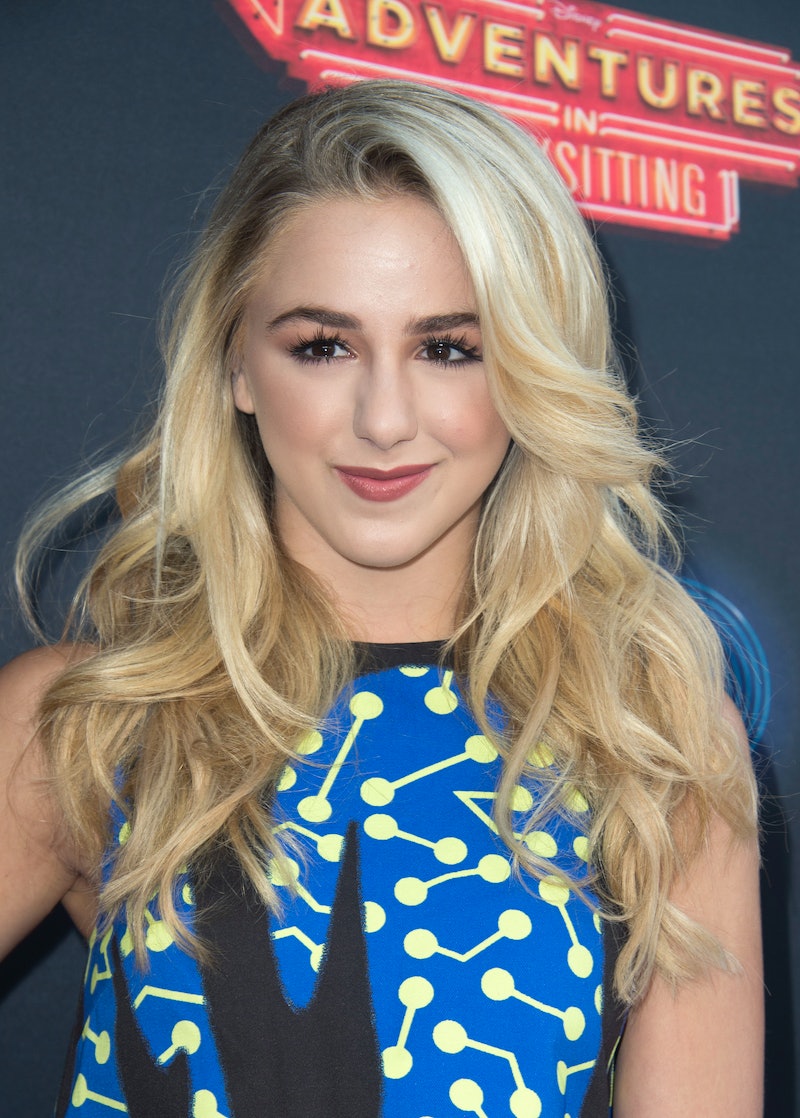 It's hard to believe that it's been five years since Dance Moms premiered on Lifetime and the world met Chloe Lukasiak, who is nominated for a Teen Choice Award this year. Chloe instantly became a fan favorite thanks to her beautiful dance skills and her sweet, humble disposition. She left the reality series in 2014, but Chloe's life and work after Dance Moms prove that the show was only the beginning of an amazing career that has taken off and thrived over the past year. In an interview with Bustle, Chloe says that her life has changed a lot since she brought home the coveted "Choice Dancer" prize at the 2015 Teen Choice Awards and she's ecstatic to be nominated a second time.

Chloe says that she and her mom, Christi, were on a plane when the third wave nominations were released on July 7. "My mom got Wi-Fi on the plane and I was sleeping, so she woke me up and and told me, 'you're nominated!' and we started screaming on the plane. I think the person next to me was like, 'what is happening?'" she recalls. Chloe's fans couldn't be happier to see her get the recognition she deserves, and they've been enthusiastically voting for her on TeenChoice.com, the FOX NOW app, and Twitter.

After her big win in 2015, Chloe's already thriving career took off in a major way and many aspects of her life have changed. "I have a surfboard now which is absolutely incredible," she says, referring to her TCA prize. "I still haven't gotten over it. I'm so lucky and I couldn't have done it without my fans." A surfboard isn't the only thing Chloe's gained over the past year. In addition to her dance training and a well-deserved Industry Dance Award, she's achieved her longtime dream of becoming an actress. Her first movie, Center Stage: On Pointe recently debuted on Lifetime and Chloe shined in her role as Gwen, a young dance prodigy competing for a spot at the American Ballet Academy.

"I loved my character. She was so optimistic and bubbly and sweet," Chloe says, adding that she shares Gwen's love of "pink and braids."

Landing her first film role was even more exciting because the original Center Stage is one of Chloe's favorite movies. She was thrilled to star alongside many of the original cast members, including Peter Gallagher, Sascha Radetsky, and Ethan Stiefel. Chloe describes Center Stage: On Pointe as her dream role. "It was a movie where I could act and dance," she says. "It was mind-blowing to me." Her acting career has taken off and Chloe recently completed filming Cowgirl's Story, which comes out on May 12, 2017. (Mark your calendars!) Chloe plays Savannah, a teenage girl with a troubled past whose life is changed when she makes a new friend and joins her school's Equestrian Drill Team. "I learned a lot on that set. I love the movie's message and I think it will be heartwarming to watch because it was heartwarming to film," Chloe says.

She also recently partnered with Playtex Sport to help bust the period stigma. Chloe tells Bustle that, growing up, many people acted like menstruation was something that should not be discussed and she wants to help break that mindset. "It’s a natural thing that happens to us and there’s nothing we can do about it, so just embrace it," Chloe says. The partnership was also important to her because she wants young girls to know that our periods shouldn't stop us from doing what we love. "I’m not going to let it get in my way, and I'm going to do what I love without anything affecting that," she says. "I was happy with my partnership and I love the message that girls shouldn’t be afraid to talk about periods."

Although she still resides in Pittsburgh and trains at Studio 19, Chloe recently got an apartment in Los Angeles because she spends so much time working there. She adores L.A. for both professional and personal reasons. "The work is here — the big dancing and acting opportunities," Chloe says. "But I also love the beaches and Santa Monica Pier and things like that."

Chloe also began online schooling this year in order to accommodate her hectic work and travel schedule. She's grateful that she had the opportunity to attend traditional school through 8th grade, but says online school was definitely the "right idea" and it's worked out well. Dance Moms fans will recall that Chloe was always studious and that certainly hasn't changed — her favorite subjects are English, History, and Biology. "I really love everything except math," she says.

Despite her stardom and hectic work schedule, Chloe remains totally humble and down-to-earth. She's extremely close with her parents and her younger sister, Clara, and in her downtime, her favorite things to do are spend time with her family and read. "I love reading so much," she says enthusiastically. "In our day and age there’s so much technology around and it's good to just unplug. I love when it's raining out so I can stay inside and read a million books."

Her favorite book right now is The Red Queen and Chloe is also re-reading an old favorite series, The Sisters Grimm, with Clara. Chloe's YouTube Channel prominently features a book club where she shares what she's reading and encourages her fans to read the book, too. "When people say that they started reading because of the book club, that makes me so happy," Chloe says.

Due to her amazing accomplishments and devoted fanbase, I wouldn't be surprised if Chloe wins "Choice Dancer" again this year. But, regardless of who brings home the surfboard this time around, Chloe is already a winner. And, more importantly, she's an amazing role model — her work ethic, humility, perseverance, and kindness are an inspiration to fans of all ages.