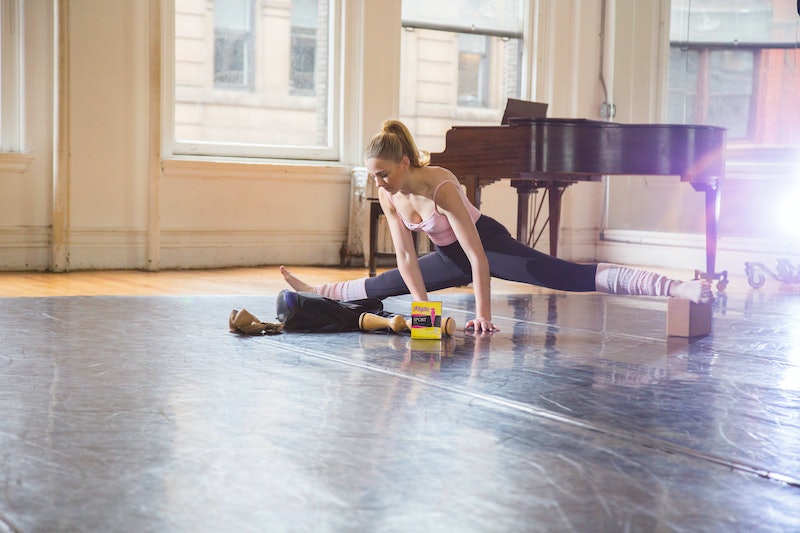 Getting your period is a shared experience for half the world. Yet, that time of the month continues to remain a topic that is considered too taboo to speak openly about. Luckily for those of us that menstruate, there are some courageous people who are publicly championing the way to end period shaming. The newest brave soul whose dedicated to stopping the period stigma? Dancer Chloe Lukasiak, who recently partnered with Playtex Sport to help end the stigma that surrounds periods. Even though she's only 15, she's ready to take on the task to inspire girls and women everywhere to feel more comfortable and confident — no matter what time of the month it is.

From her time on Dance Moms, to her upcoming role in the Lifetime drama, Center Stage: On Pointe, which premieres at 8 p.m. ET on June 25, Lukasiak has always led a busy and active lifestyle, which is exactly why her partnership with Playtex Sport works so well, she tells Bustle in an interview.

"Preparation is key for success," Lukasiak says. "I partnered up with Playtex because I think it’s really important to be prepared so that you can give the best performance possible, and so you can focus on what you need to do and do it well and not have your period get in your way."

At such a young age, Lukasiak already knows exactly why the period stigma is ridiculous. "It’s not a decision we’ve made. It’s not like we were like, ‘Yes! We want that! Please give that to me! I really want a period!’ No, we didn’t do that," the dancer says. "It's a natural thing and we can't really control it, so we might as well be open about it ... It's just something that we have to deal with."

When you menstruate, your body does more than just bleed. Talking about all of the individual changes that our bodies go through when we're on our periods is a great start for us to become more comfortable with the overall concept of the period. Lukasiak, for instance, is ready to normalize the mood swings that accompany her period.

"Everything that happens is natural, so don't be worried by the mood swings. I know I've experienced them and I know it's really tough, because some people will be like, '...Why are you like this today?'" Lukasiak says. To those people who question her moods, Lukasiak laughs it off and just responds with, "Sorry guys! It's the time of the month!"

Normalizing the way we talk about periods is a key step to breaking down the stigma. And, why exactly is it so important to break the stigma? The reason is because when we are all comfortable talking about our periods, then we also won't be afraid to voice any concerns we may have or call out injustices like the tampon tax and the laughable status of tampons as a "luxury item."

We can also share important information about what to do if you're experiencing unusual symptoms. For instance, as a teenager, I used to get terrible cramps during my period that would sometimes keep me from going to school. Unfortunately, I was too embarrassed to ask for help. When I turned 18, I started taking birth control, and I've been cramp-free ever since. But, if I hadn't been so afraid to speak up about the pain my period was causing me, I would have found out much earlier that birth control pills help me relieve my period symptoms. We shouldn't ever have to feel uncomfortable with our periods, which is exactly the point Lukasiak wants to make with her Playtex Sport partnership.

"I hope to encourage girls to continue to be active, while still being confident and comfortable, and to show other girls that you can do what you love and not have to worry about periods," Lukasiak says.

Each athlete stars in their own video that shares their preparation rituals that motivate them to "Play On." The campaign also seeks to get us involved in opening up about their periods with a sweepstakes that encourages them to post on their Twitters or Instagrams about how they prepare to "Play On" using the hashtags #ReadySetPlayOn and #Sweepstakes. So, play on, and don't forget that your period is totally a normal part of life and no one should be ashamed. If a 15-year-old celebrity can talk about her cycle to a bunch of reporters — we all can.

More like this
This TikTok Trend Will Help You Be Kinder To Yourself, Says Scarlett Moffatt
By Frances Stewart
6 Abortion Advocates To Follow On TikTok
By Sara Youngblood Gregory
Hayden Panettiere Admits "Addiction" To Alcohol & Opioids Before Going Sober
By Jake Viswanath
Travis Barker & Kourney Kardashian’s Updates About His Health Are Promising
By Stephanie Topacio Long
Get Even More From Bustle — Sign Up For The Newsletter