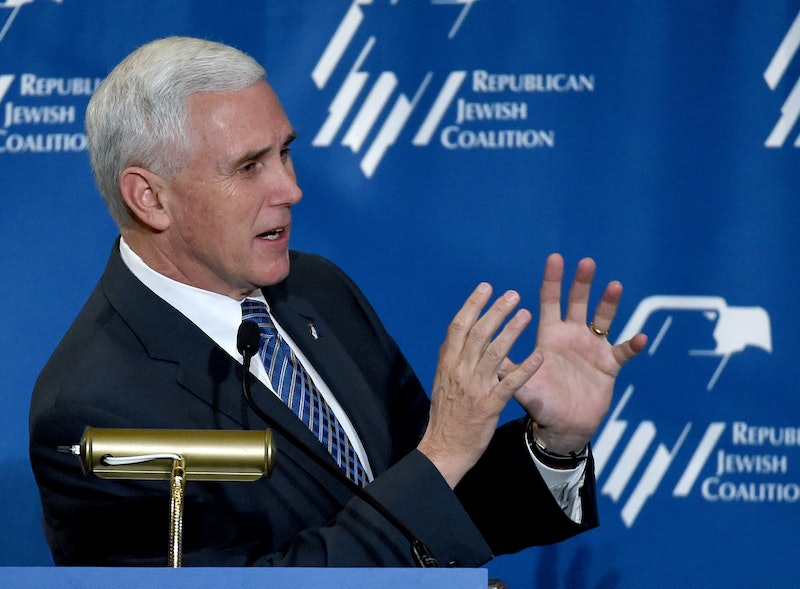 Earlier: Presumptive Republican nominee Donald Trump is considering Mike Pence as his running mate, as reported by Reuters. We will find out Friday if this is so. But until then, we get to ponder a million questions, including what is Mike Pence's net worth?

Because, even though it feels like none of our business, it does kind of help to know the financial history of our leaders. Unsurprisingly, they are ridiculously well-to-do almost 100 percent of the time. In fact, it's pretty much a requirement for them to be at least some kind of rich, even with the backing of all their various supporters.

So it's pretty surprising that Mike Pence is somewhat middle class (at least when compared to Trump), with a net worth of about $150,000, according to John D. Sutter on CNN.com. Pretty interesting, right? That chunk of change isn't entirely unfathomable to us decidedly more common folk. And it feels pretty refreshing. Maybe his slightly more normal net worth (again, in comparison to Trump's) will help shape his views in our favor?

The man is relatable in other ways, as well. He attended Hanover College, and then Indiana University School Of Law, in Indianapolis. He calls himself a lifelong Hoosier. And he is a family man. All I can say is, he's not Donald Trump-level of rich and famous, so this could very well offer a nice balance. We shall see.