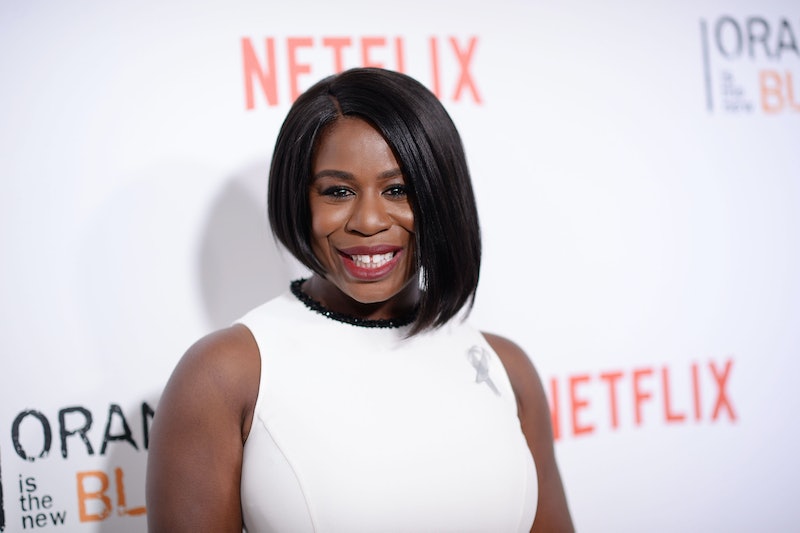 If you spent a good portion of June marooned on a couch watching season four of Orange Is The New Black, you were probably just waiting for the gang to collect Emmys like they were Pokemon. Instead, the 2016 Emmy announcements left a peculiar taste in our mouth: no one from OITNB was nominated for this season. Which is mind-boggling on many levels, but it's especially strange that two-time award-winner Uzo Aduba snubbed by the 2016 Emmys.

Lest we forget, Aduba made history when she won 2015 Supporting Actress in a Drama Series award for her performance as Suzanne "Crazy Eyes" Warren. She previously won the 2014 Emmy for Outstanding Guest Actress in a Comedy Series, and subsequently became the first actress to win an award for both comedy and drama in the same show. This makes sense as Suzanne's eccentricities have been able to elicit gigantic lolz and heavy sympathy alike. So why did she get passed over for Season 3?

Well, as someone who's cycled through the series more than a handful of times, and it's easy to see Season 3 (which is the season currently eligible for Emmy noms versus the just-released Season 4) as a big year for Suzanne. Yes, by this point in the series Litchfield Prison is already starting to get crowded, likewise, so is the ensemble cast. With so much talent in the mix, it's really difficult to get those prime performances in the spotlight. Regardless, nobody can doubt that Suzanne really came to the forefront in a hilarious way. Yes, now free from being Vee's body guard, Suzanne emerged with a brand new career: author of The Time Humper Chronicles.

A lot can be said about Suzanne's erotic space novel, but I think we should start with the the fact that the torrid love triangle between Edwina, Gilead, and Space Admiral Rodcocker almost makes Fifty Shades of Grey sound less ridiculous in comparison... almost (eh, not really). There are vaseline aliens and wormhole orifices, I don't know... I guess in prison that makes for valid titillation material. What's especially brilliant, though, was watching Suzanne cope with her newfound success. At first, she embraces her role as the writer of the hottest piece of literature in Litchfield. Slowly, though, she begins to cave under the pressures of success.

We also get endearing snippets of how she fears being Maureen's object of interest because (twist) she really doesn't understand having a girlfriend. Spoiler Alert: these problems definitely bubble up more in Season 4.

So yeah, while Season 3 wasn't the most dramatically intense journey her character, Orange Is The New Black ensured that Aduba really worked her comedic chops with Suzanne's masterwork. If nothing else, I definitely think that a nom could've been in order. Regardless, Aduba's career isn't going to live or die by this passover, so for now I guess we just have to hold out for next year, and hope that 2017 will bring justice for the Litchfield inmates.