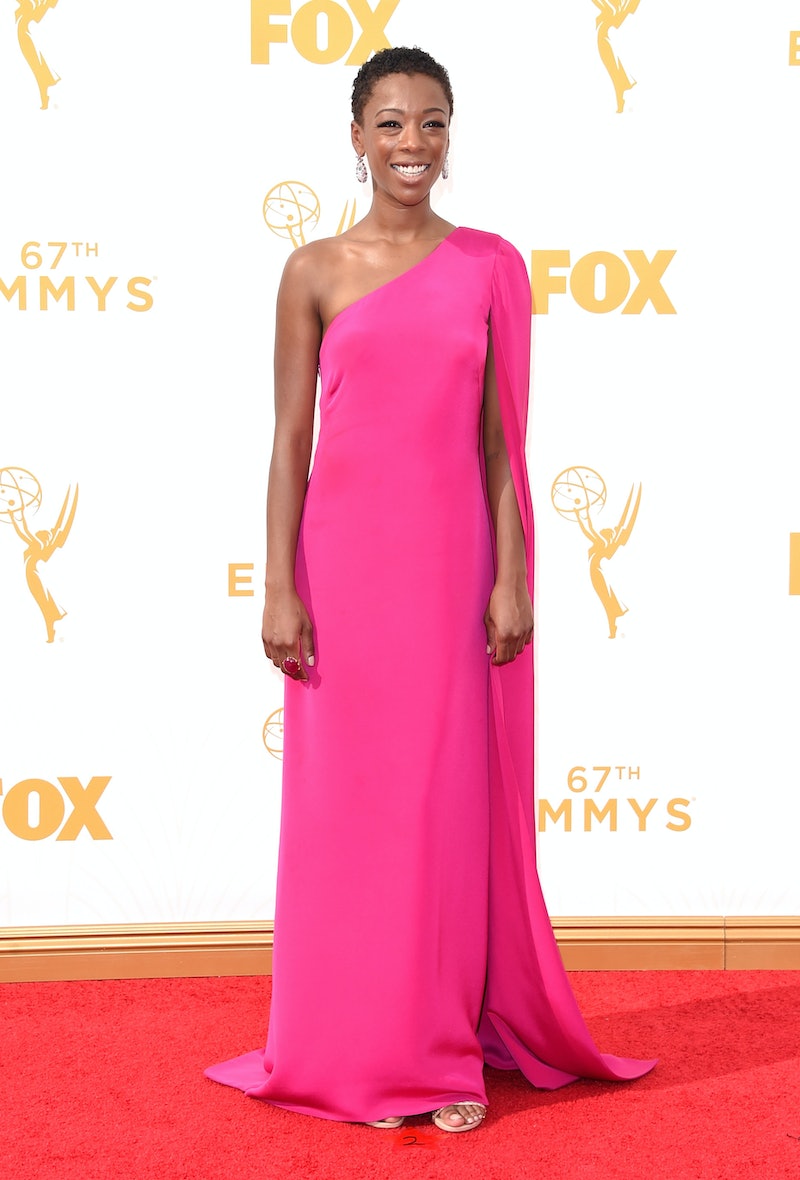 The Netflix series Orange Is the New Black has earned a total of 16 Emmy nominations and four wins in its history so far. For individual acting nominations, Wiley hasn't been recognized (yet), but Tyler Schilling for Piper Chapman, Pablo Schreiber for George "Pornstache" Mendez, Natasha Lyonne for Nicky Nichols, Laverne Cox for Sophia Burset, and Uzo Aduba for Suzanne "Crazy Eyes" Warren have all been nominated. While that is a decent amount of actors to be nominated, Orange Is the New Black is a huge ensemble, so competition to gain the attention of Emmy voters has got to be pretty stiff when it comes to these coveted acting nominations.

Out of those five Orange Is the New Black actors to be recognized by the Emmys, only Aduba has been nominated twice. She also won both times — but in different categories. The Emmys have struggled with categorizing Orange Is the New Black since for Season 1, they had the series listed as a comedy and then ruled it ineligible as a comedy for Season 2. Because of that, Aduba won the award for Outstanding Guest Actress in a Comedy Series (Crazy Eyes wasn't promoted to main character until Season 2) in 2014 and then in 2015, she won Outstanding Supporting Actress in a Drama Series — making her the second actor ever to win an Emmy for the same role in different genres (Ed Asner did it first). This also means Aduba is the only person from Orange Is the New Black to win an individual acting Emmy.

If all of that genre swapping wasn't confounding enough, what's also tricky about Orange Is the New Black's Emmy eligibility — and the reason why I don't think Wiley will be winning an Emmy this year — is its release date on Netflix. The series has always been released in the summer months, with Season 1 premiering in July 2013 and the subsequent seasons being released in June. And therein lies the problem — or shall I say, the confusion — of Orange Is the New Black and the Emmys.

The Primetime Emmys eligibility schedule is set around traditional television schedules, which means the eligibility period to be nominated for the 2016 Emmys is June 1, 2015 to May 31, 2016. That makes total sense when you think of basic cable TV programming that typically runs shows from September to May. Yet, this window for eligibility causes complications when you think of premium cable, Hulu, Amazon, and Netflix programming, which all abide by their own laws. Season 4 of Orange Is the New Black was released on June 17, 2016, so because of the eligibility cutoff date being May 31, it won't be eligible for the 2016 Emmy Awards — Season 3 actually will. That means Season 4 won't be up for any nominations until the 2017 Emmy Awards over a year from now ... where's Poussey's hooch when you need it?

Season 4 is freshest in the minds of Orange Is the New Black fans considering you probably marathoned the entire series during the week (or weekend) it was released on Netflix. But forget all that when thinking about the 2016 Emmys because Wiley's stellar and devastating performance in Season 4 isn't what's being considered at this year's Emmys. With that in mind, I don't think you should expect Wiley's name to be announced as an Emmy nominee on July 14.

While that's not to take away from what Wiley did with Poussey's character in Season 3, her buzziest performance took place in Season 4 with her romantic relationship with Soso, her fan-girling relationship with Judy King, and her heart-wrenching death followed by her bittersweet fourth-wall breaking look in the last moment of the season. Her tragic, Black Lives Matter-inspired death plus that final smile, which encapsulated her good nature and unique spirit, will forever be how I remember Poussey in Orange Is the New Black and it's also her greatest chance of being recognized by the Emmys.

Of course, you can still hold out hope that Wiley will be nominated during the 2016 Emmys for Season 3, but I am skeptical since she wasn't nominated for Season 1 or 2 before that. But, unlike her character returning to Orange Is the New Black for Season 5, there is a chance she'll be recognized as Poussey at the 2017 Emmys and that's a little slice of solace after her heartbreaking goodbye.