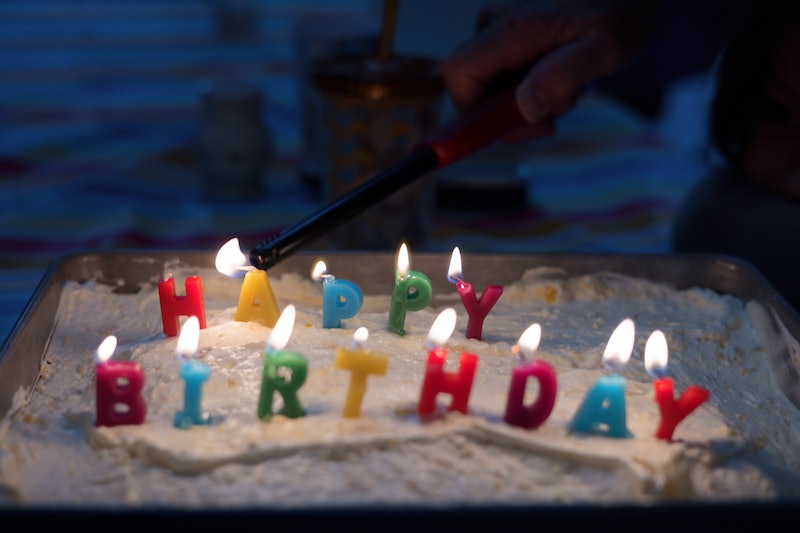 It’s hard to find anything comparable to the excitement we felt as kids counting down the days till our birthday. Birthday parties were the absolute BEST in the ‘90s — we had the best toys, the best games, the best decorations and ice cream cakes (OK, maybe this is partially nostalgia talking — but come on, we had Rugrats!).

When we were kids we believed that if we closed our eyes really really tight and made a wish as we blew out our colorful birthday candles it would actually come true. We believed that we could actually will something into existence, which is a pretty great super power if you think about it. And then we ripped off the wrapping paper on all our glorious gifts in a sugar-high craze!

As we reach adulthood the importance that we put on gifts diminishes. Instead of fixating on the latest toy or game, we tend to prefer something more useful — like cold hard cash. I knew I had officially reached adulthood when one Christmas I asked for a set of towels, a kitchen knife, and a humidifier because those were the practical things that I desperately needed, but couldn't afford with my measly starter salary. As a kid the basics are provided for you, so your gifts are always fun (unless someone knits you an itchy sweater — yuck). So let’s relive some of the greatest things we wished for on our birthday in the ‘90s, that we would still be totally pumped to receive today:

In the late '90s, Furbys took the world by storm. The somehow adorably strange owl-hamster electronic toy was the must-have toy of the 1998 holiday season. As someone with a December birthday I know there was only one thing on my list that year. I was so happy, I played with my Furby for hours, watching its giant eyelash-rimmed eyes and chicken-like mouth open and close as it sang in a nonsense language the box called "Furbish." It was funny and interactive and totally freaked me out when it would activate suddenly in the middle of the night. All part of its charm... I guess?

In the early '90s we all loved learning our A,B,Cs from the furry red Sesame Street star with the squeaky voice and can-do attitude. In 1996 Tickle Me Elmo became a sensation when it was introduced to the U.S. and stores sold out quickly. The coveted toy would laugh, squeal and vibrate when touched. The shortage lead to pre-Christmas stampedes, and scalpers charging big bucks for the desired toy that originally retailed for just under $30. Tickle Me Elmo was definitely at the top of your birthday list in 1996 and was too cute to put down.

Before we could have real tea parties with our dolls in the American Girl Place, we were making our own tea parties in our bedroom. This pivotal doll debuted in 1986 with the original "American Girls": Samantha, Molly, and Kirsten. Not only did the toys teach kids about history, but they came with books giving complete backstories for the dolls, interchangeable clothes, and accessories that brought "playing pretend" to a whole new level. In 1991 Felicity was introduced to represent the revolutionary war period, then Addy came on the scene in 1993, and Josefina in 1997. One of my favorite birthday gifts from the '90s: a nightgown to match my Felicity doll's dress so that we could be twins.

The comic book heroes of the 1980s spun off into an animated TV series that ran through 1996, and the original live action TMNT movie in 1990. These pizza-loving, skateboard-riding crime-fighting turtles stole our little hearts. With their surfer-dude lingo and colorful eye masks they were the absolute coolest (and their toys were even cooler). Their popularity peaked in the early to mid-'90s, and it seemed every millennial had a Turtle Power!-themed birthday at some point in their childhood.

Before everyone carried a small computer in their pocket, Tamagotchis were king. Arriving on the scene in the U.S. in 1997, the small electronic pet became a sensation. The simplistic egg-shaped computer screen with three buttons on a key chain allowed kids to hatch an egg and "raise" a pet by electronically feeding, scolding, and playing with it. You could even turn off the lights so it could sleep. I remember all too well begging my parents for a Tamagotchi. They were so popular that teachers would confiscate the little devices at school.

Though I loved the toy at first, I was not the most responsible Tamagotchi owner and would forget about my pets for days. When I finally remembered to check the screen, a skull icon would appear, and the cycle would repeat again.

What could possibly be better than a teeny tiny doll house about the size of a makeup compact, that could (supposedly) fit in your pocket? Nothing — at least that's what I thought back in the mid-1990s. I was obsessed with these portable little worlds released by Bluebird Toy Co. and Mattel in 1989 and loved playing with optimistic, friendly Polly and all her companions. The only problem with the super popular Polly Pocket? Losing her between the couch cushions and feeling super guilty about it.

Kids do not usually like to follow commands, but that wasn't the case when it came to Bop It. The classic Hasbro toy told kids to do three simple things: bop it, twist it, or pull it. There was no real skill to it, besides the commands coming faster. The commercial says "It commands, you obey!" why were we obsessed with this thing again?

When this pressurized water gun hit the shelves of Toys R'Us in 1991, it took summertime to a whole new level. As every '90s kid knows, the powerful stream cooled you off but also stung a little bit. In the hands of a younger sibling, it could be almost deadly. Back in the '90s it was soak or be soaked, so every kid had to have one.

The girl group formed in 1994 became a global phenomenon and was the epitome of cool for every elementary and middle schooler. It seemed like EVERYONE had bought their debut album Spice at Tower Records and knew all the words to their mega-hit "Wannabe." To this day I believe that their 1997 movie Spice World is sadly underrated — but then again, I got that on VHS for my birthday, so we maybe we can chalk that up to nostalgia.

Two Nintendo game systems basically owned the '90s, and were at the top of every kid's birthday list. You needed these devices in the latter half of the '90s to play Super Mario 64 with its cool 3D graphics and OG Pokemon Red and Blue. Like, duh? How else were you gonna catch them all back then?

The fad began in 1993 when the Ty Toy Company launched a line of cute collectable stuffed toys that had a similar texture to bean bag chairs. Each animal had an equally adorable name like "Splash the Whale" or "Chocolate the Moose." With so many to choose from there was always at least one beanie on the all-important birthday request list. As the new millennium approached, the Beanie Baby frenzy started to fade and was replaced by Pokemon as the hot toy. Our massive collections were quickly defunct... unless you had a Royal Blue Peanut.

You didn't simply want Backstreet Boys concert tickets... you needed them. You told your parents that come your birthday they needed to quit playing games with your heart and pony up for some good seats.

In the '90s you could open any Delia's catalogue and see drool-worthy pairs of Dr. Martins, Jelly Sandals, or Steve Madden platform slip-ons. They were comfortable, fashionable, and went perfectly with all those long skirts and flannel shirts in your closet.

A waterslide in your own backyard? Uh... yes please!

Lisa Frank's fun, colorful images livened up school supplies in the '90s and made great gifts. If you didn't have one of these in your backpack back then, you will have yet another chance to sport that nostalgic unicorn! Lisa Frank has a clothing line coming out summer 2016 — but I call dibs on the rainbow dolphin sweater.

A Portable compact disk player seemed pretty high-tech back in the '90s and a Sony Discman was probably one of your fave birthday presents. Nothing was cooler than collecting CDs and keeping them prestinely displayed in an enormous binder (besides binder full of different Absolute ads, that is).

There was nothing like tearing open the foil on a new pack and seeing what new rare cards you could add to your collection or save for trading on the playground. Man, I wish I could find all my cards today, I bet they would actually be worth something...

More like this
17 Genius Things You Can Do With Old Clothes That You Can't Donate
By Brittany Bennett and Dominique Norman
Meet The Disney Imagineer Bringing 'Guardians Of The Galaxy' To Epcot
By Charlie Mock
Starbucks’ Chocolate Cream Cold Brew Tastes Like This Retro Candy
By Emma Garza
When Did Tamagotchi Come Out? In The U.S., 25 Years Ago
By Kaitlyn Wylde
Get Even More From Bustle — Sign Up For The Newsletter