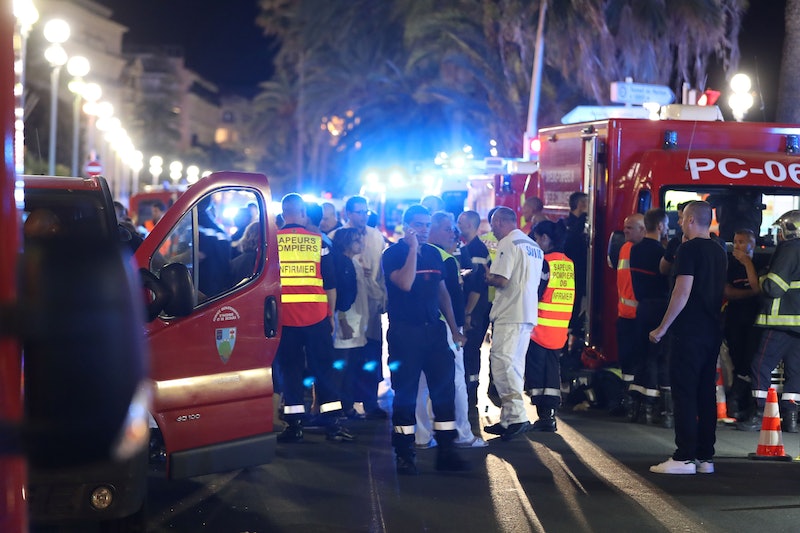 Earlier: Following an attack that killed at least 77 people and injured more than a dozen on Bastille Day in Nice, France, the international community is offering its condolences and aid as a symbol of worldwide solidarity. On a more personal level, a variety of nonprofit organizations make it possible for you to donate to the Nice, France victims, even if it's just a small amount. Currently, those directly and indirectly affected by the attacks will need both medical assistance and immense emotional support to help them rebuild their lives.

As fireworks fizzled out and scores of French citizens exited via the streets, a man intentionally drove his truck into the crowd. According to Christian Estrosi, the president of the region, the truck contained firearms and grenades. Its driver was shot dead by police. In response to the atrocity, French President François Hollande extended the nation's state of emergency by three months, calling it a terrorist attack. The country has been in a state of emergency since the Paris attacks of November 2015 that killed 137 people.

On French National Day, otherwise known as Bastille Day, the French celebrate their unity as a nation. Though this tragic attack has badly shaken the country, its people will remain banded together. With any luck, people from around the world will join hands with it during this great time of need. Donating to these reputable organizations is a great way to contribute. None have dedicated themselves entirely to the attack yet, but that could change in the near future as they're allowed more time to plan response efforts.

Give for France is a fundraising campaign managed by the Fondation de France, an agency created by the French government to boost private charitable efforts. The campaign provides aid for a variety of organizations that assist communities and individuals affected by terrorism in the healing process. According to the site, it does this by pioneering educational programs and citizenship initiatives.

Those currently in France can donate blood through the French National Blood Service. A map of locations can be found here.

The Red Cross' wing in France will likely be responding to victims at the scene of the attack.

The aid organization focuses primarily on assisting those living in poverty, but is also active during national crises and natural disasters. Following the November 2015 Paris attacks, media organizations, such as USA Today, suggested that readers donate to it.

Similar to Secours Populaire Française, Secours Catholique-Caritas France spends its funds on social missions and emergency responses. Though the organization is based in France, it uses its donations to pioneer initiatives in countries around the world.

The U.N. Victims of Terrorism Support Portal explains how particular nations respond to terrorist attacks and reach out to victims. Though the site doesn't accept donations, it's a great learning tool. The United Nations Foundation, with which it's affiliated, does take donations.

More like this
How To Follow The New Royal Family Social Media Accounts
By Sam Ramsden
Is Queen Elizabeth II Or The Royal Family In Netflix’s 'Harry & Meghan' Docuseries?
By Jake Viswanath
Prince Harry Explains Why He Feels Guilty For Meghan's Estrangement With Her Dad
By Jake Viswanath
Archie & Lilibet Are Eligible For Royal Titles — But There's A Catch
By Jake Viswanath
Get Even More From Bustle — Sign Up For The Newsletter