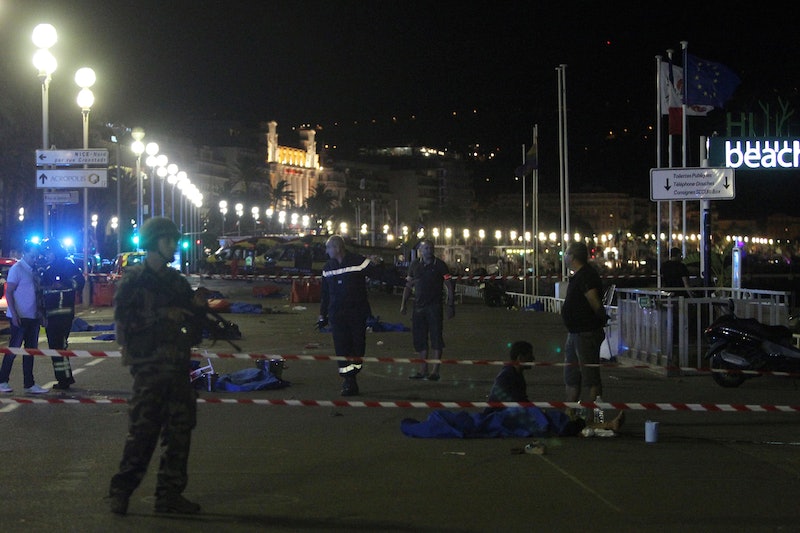 Earlier: As Americans, you and I were thousands of miles removed from the tragedy that struck Nice, France on Thursday evening. We did not personally know the 84 people who have been confirmed dead after a man drove a truck through a crowded promenade. However, this one photo of the Bastille attack will make you feel as though you did. The photo of a small girl's wrapped, lifeless body next to her doll illustrates the tragedy of senseless death and the cruel robbery of both life and innocence.

Instead of being taken from a bird's eye view, the photo was taken from the ground and includes nothing except the girl and her doll. Whereas the pictures taken from helicopters show the extent of the tragedy by revealing dozens of bodies, this single photo, snapped by Reuters, reminds the world that each of those 84 victims had a life of their own and were loved by others. The victims aren't just numbers. They have names, goals, occupations, families, and friends. Essentially, they aren't unlike you and I, or anybody else for that matter. And that's something we all need to remember during these divisive, tense times: We must stand united as humans.

No family, friends, or police are present in the frame. By omitting any indication of the girl's past life — aside from the doll, which suggests she's very young — the photographer has made her relatable. She could have been your little sister, a girl you babysit, or your daughter. And based on snapshots of people walking through the street hand-in-hand, survivors realized this in one of the most startling and surreal ways possible. This next photo taken by Antoine Chauvel indicates an amazing outpouring of support and solidarity. The woman to the left is covered in blood, but still walking, prompting viewers to ponder the delicate nature of life itself.

In a statement following the attack, French president François Hollande stressed the fact that several of the victims were children. Outraged by the assault on innocent lives, he promised to continue military efforts in both Iraq and Syria and announced a three-month extension of the nation's state of emergency:

This is a monstrosity to use a truck to deliberately kill people, many people, who only came out to celebrate their national day. France is in tears, she is hurting but she is strong. She will be stronger.

In a media-frenzied world, it's easy to become desensitized to deaths and tragedies that occur beyond your own doorstep. Sometimes it takes poignant visual reminders to bring the world's bystanders back to reality.