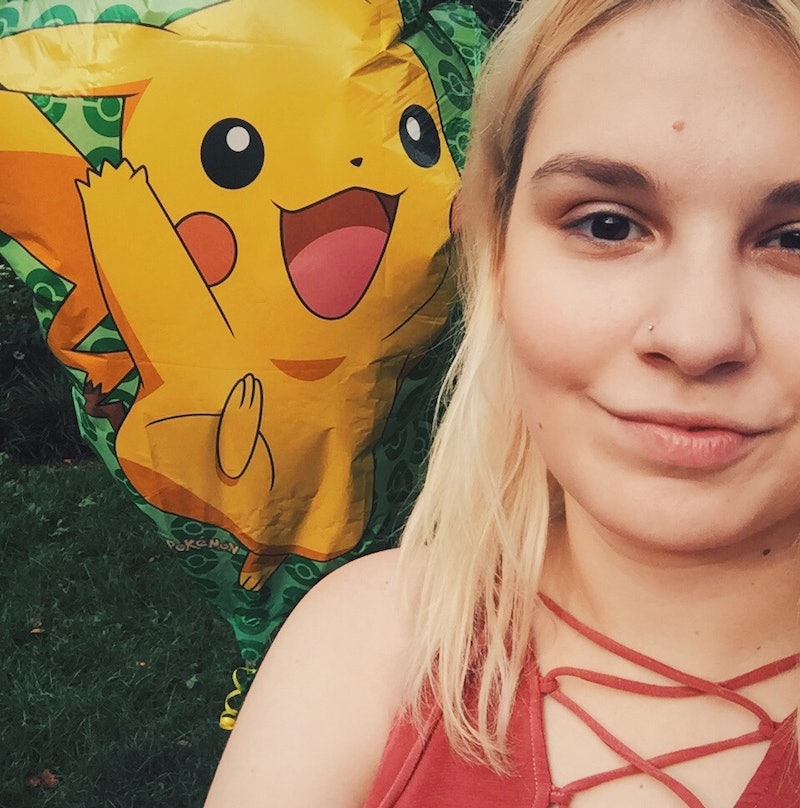 "What kind of Pokémon is that?" I ask my friend Anna as I point out a dog being walked in Madison Square Park. She rolls her eyes at my hilarious joke, clearly done with the theme of the entire day: Pokémon.

Anna and I had just spent two hours walking around New York City with hundreds of other people playing Pokémon Go, the new augmented reality game that you're probably either obsessed with or tired of hearing about. If you're part of the former group, then you should be excited to know that you can now go to a Pokémon Go meetup, where you and other like-minded people walk together to various parks IRL to catch as many virtual Pokémon as you can (before your phone inevitably runs out of battery, of course). And, as someone who has now been to one of these meetups, I can tell you exactly what goes down when hundreds of people band together to catch these animated critters.

When I arrived at Washington Square Park at 6 p.m, I didn't know what to expect. Who would be there? How many Pokémon would I catch? How many people would show up? When I checked the event's website, it said about 200 people were interested in going, but the cloudy day looked like rain was imminent, and I doubted the commitment that Millennials have to their favorite little creatures. But man, was I wrong. Here's what happened:

1. There Was A Surprising Amount Of Singing

Along with the expected yelling that typically accompanies events with large groups of people, there was also a lot of singing going on. Every time we entered a new park, people burst into song, chanting the lyrics, "I want to be the very best, like no one ever was. To catch them is my real test; to train them is my cause."

TBH, as someone who knows the Pokémon theme song by heart, it was actually super fun to scream about how catching Pokémon is my destiny in the middle of Union Square Park without being judged for it. I mean, some of the regular park-goers might have been judging, but I couldn't tell over the Pokémon-themed melody (nor would I have cared if I were to notice).

While everyone was gathering in Washington Square Park at the start of the event, I heard a large commotion behind me. Someone had just proposed! Now, sure, this may have not been related to the Pokémon meetup, but it definitely brought an added touch of excitement to those around me, which included the Pokémon meetup people. I've never seen a public proposal before, so it was definitely an interesting thing to watch and if it weren't for Pokémon Go forcing me to go outside, I never would have witnessed this touching moment.

A Pokémon Go meetup has that same energy and spirit that people love so much about going to Comic-Con. It's a place where you get to wholeheartedly embrace and love your favorite things with other people who love those things just as much as you do.

So you know how I mentioned that 200-something people were interested in the event when I first checked? Well, after the event, the page reports that 1,200 people actually went, and that's just the amount that checked in online! The event was definitely a big deal and as the event went on, it just became bigger and bigger. The group continued to grow with each park visit.

At one point between parks, the amount of people walking stretched over three intersections. Upon entering Madison Square Park, I heard someone tell her friends that she wanted to join us. It was crazy how many people got involved. And, according to Rick Bross, the organizer of the meetup, this hopefully won't be the largest event since him and his team are currently working on an event that hopes to have between 10,000 and 20,000 attendees.

5. The Game Wasn't The Only Pokémon Product

One of the first things I noticed when I arrived at the event was a man standing on one of the park benches making Pokémon balloons. Someone walked by me with a Pikachu balloon as I watched the man make a Squirtle for one of the children standing by. I could tell immediately that I was in for a real Pokémon-filled experience.

After watching the Pokémon balloon master for a few minutes, I went to observe the growing crowd, and what I found were a lot of enthusiastic Pokémon people. People were decked in Pokémon gear, from Pikachu T-shirts to Ash Ketchum hats. There were even a few people reppin' other Nintendo favorites with Legend of Zelda backpacks, which added to the aforementioned Comic-Con-esque vibe of the event.

And the Pokémon products didn't stop there. At the beginning of the event, we were told that they would be giving away prizes at the end of the meetup. One of these prizes was a rare "Birthday Pikachu" card that Bross has had since he was a kid. These people really knew how to throw a Pokémon party.

6. Catching Pokémon Was A Guarantee

Bross went ahead of the crowd to set up lures at all of the Pokéstops along the way, setting everyone up for a Pokémon-packed adventure. I was more invested in observing everyone around me than catching my own Pokémon, and yet, I still managed to catch 18 new ones. Also, my amazing observation skills led me to catch a Bulbasaur because someone nearby tipped off their friends. And, since the route took us past so many Pokéstops, there was never a shortage of Pokéballs either, so there was really no way to leave the meetup (virtually) empty-handed.

So if you're ready to go on a quest for Pokémon and meet a bunch of other people who love the little pocket monsters as much as you do, then check out the list of upcoming events here.

There are tons of different kinds of meetups ranging from weekly 6 p.m. Lure Parties in Union Square to massive adventure walks. They're even promoting other Pokémon-related events like a Pokémon bar crawl, which has got to be one of the greatest ideas ever. Catching a Pikachu while sipping a glass of wine? Count me in.

More like this
Side Character Energy Has Arrived — Here’s What That Means
By Sophie McEvoy
What Is A “Softboy?” The TikTok Term & Aesthetic, Explained
By Courtney Young
Why Are TikTokers Slapping Each Other With Tortillas?
By Courtney Young
Coastal Granddaughter Is The Latest Summer Aesthetic Going Viral
By Emma Garza
Get Even More From Bustle — Sign Up For The Newsletter