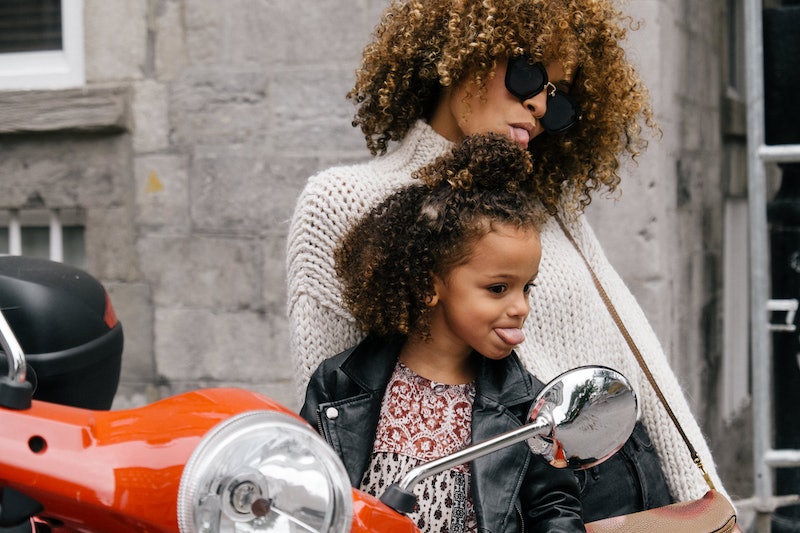 Since embracing a greater deal of self-love and acceptance within myself, I've been thinking of all the ways I could pass these messages on to my future children. We begin developing a concept of body image from a pretty early age, so more body positive parenting might just help in creating generations that are less judgmental of their bodies and the bodies of others.

I want to teach my kids all about physical autonomy and how beauty is a subjective conception. There are some actions I've seen displayed by my parents and the parents of others, in particular, that enforce the kind of body negativity I want to be sure to avoid in my own parenting.

As children, we obviously can't expect our parents to be perfect. Since many of our 'rents come from a time or culture in which body positivism or body negativity weren't discussed, it's understandable that it might be difficult for them to unlearn certain concepts about the body that they perceive as true. But with my own kids, I want more than anything to teach them to love their bodies and be kind to those of others from day one. With that in mind, here are some of the body negative actions I've observed that parents (and future parents) should consider abandoning.

Weight loss is, across the board, usually considered a universal "good." But based on a person’s body type or preference, the concept can be wholly negative. Removing the subjective belief that "thin equals good" and "fat equals bad" from household discussions might just help curb body image issues and avoid eating disorders later on.

When my younger sister was in middle school, she developed an eating disorder. Although my parents aren't the most body positive folks in the world, they're certainly not to blame for her struggles. But as my sister lost more and more weight over the course of her ED, my parents (mainly my dad) continuously rewarded her for “losing the belly,” and even showed her "new body" off to family members who had previously poked fun at her weight.

This behavior is unacceptable. I want my kids to know that they're beautiful and worthy of tolerance at any weight, while being supportive through their body image struggles. Recognize the difference between healthy and unhealthy weight loss is also of utmost importance. If your child is losing weight rapidly through starvation or compulsive exercising, their health and wellbeing are clearly at jeopardy.

2. Pushing Kids To Get Braces

From what I've seen through my friends and my own orthodontist appointments, braces are usually used primarily for achieving conventional aesthetic beauty (aka symmetry) rather than out of medical necessity. Nonetheless, my parents would constantly bring attention to my crooked teeth to the point where I felt self-conscious enough to ask for braces.

After my parents joyfully made the appointment for me, I was disappointed at the news that having braces would be uncomfortable and headache-inducing, and I was further put off by the fact that my orthodontist recommended I get cosmetic surgery to make both of my jaws the same length. Since I was already going through a chronic illness at the time, I decided that learning to love my smile would be a better idea than opting for a costly mouth full of metal.

Pressuring kids to get their teeth corrected as though it’s a necessity can be very damaging. I would want to reinforce to my own kids that their crooked teeth are beautiful, and that mouths come in all shapes and sizes. I would never consider getting orthodontic work done on my kid unless there was a great medical necessity for it.

3. Misusing Or Banning The Word "Fat"

From an early age, I was taught to be disgusted by fat bodies and to curb my eating habits in order to prevent myself from becoming fat. Such notions were harmful nonsense, though. Not only did they make me self-conscious of my weight and food intake, but they taught me to equate fatness with ugliness and even immorality.

Sometimes, parents who mean well react to cultural fat shaming by banning the F-word from the house altogether. This, however, is just as bad, as it entirely erases fat bodies from our consciousness. I want my children to grow up learning that “fat” is not the death sentence it's often made out to be, and that being fat does not detract from being beautiful.

Growing up, my dad would regularly make a sport out of making fun of fat folks, trans folks, folks of color, and disabled people (both developmentally and physically). Since he introduced this practice into our lives when we were so young, my sister and I used to take part in the sick game. It was a “game” that taught me to develop a lot of judgment surrounding marginalized bodies — beliefs that took me years to undo.

I would never encourage my child to tease or mock the bodies of others, but rather teach them to celebrate and respect them. If my kid has rude questions about the appearance of certain folks (as younger children often do), I hope to explain to them that all bodies are good bodies. This could be reinforced through books and hand-selected media that demonstrate the beauty in diversity.

6. Rewarding Or Punishing Children For Being "Ladylike"

In many households, there tend to exist a lot of gender policing á la the gender binary. One thing that comes to mind is the stigma around femininity, whereby boys are criticized for “acting like a girl,” or girls are scolded when they do something deemed less than “ladylike.”

My dad’s constant request for me to be more ladylike if I was sitting "the wrong way," dressed "the wrong way," or burped at the table really had an impact on me, stunting my ability to be comfortable with my genderqueerness and natural bodily functions earlier on in life. My goal is to raise my kids without the limitations of the gender binary, and let them inhabit the outfits and mannerisms they love without judgment.

Like most people raised as girls, I was taught that shaving was necessary and was reminded of this whenever I'd go ~too many days~ sans razor. But pressuring your kid to adopt a body maintenance routine simply because it's a gendered expectation isn't kind.

I'll certainly make my kids aware of their options, but I wouldn't argue with them if they weren't interested in shaving. Hair removal simply isn't for every person assigned female at birth, and conversely, I'd support my assigned male at birth kid if they want to shave their legs.

My future children's personal preferences are not something I have a right to decide. Besides, I would never want to block them on their own journeys towards understanding and embracing their gender in the same way that my parents inadvertently did to me.

When I was 17, I decided that I wanted to get a tattoo for my 18th birthday. While my dad resisted this choice, my mom went ahead and bought me my first tat, getting one of her own on the same day. But most of my friends weren't so lucky. Many folks have to hide their ink from their parents, or are met with endless criticism and rejection when they visit their hometown with a new facial piercing.

Once again, your kids’ bodies are theirs to do what they want with. Once they're 18 or over, especially, it's not really up to parents to critique the choices they make surrounding body modifications (or any bodily choice for that matter).

As someone with a few body mods myself, I look forward to welcoming my kids with acceptance and enthusiasm once they decide they're ready to go under the needle (if they decide to, that is). Body mods have helped me gain agency over and love for my body, and I'll be sure to pass that message on to any kid who wants to get one, too.

9. Judging Clothes That Are "Too Revealing" Or "Inappropriate"

One frustrating thing from my upbringing that's followed me into adulthood is my parents’ monitoring of how low my top was or how much skin my skirts showed. Perpetuating the notion that feminine people should feel ashamed or fearful over showing off their skin is not the best route to supporting their body image or their struggle in a world characterized by rape culture.

Personally, I’ll let my kid wear whatever they want because I'd never want them to feel like their body was to blame for an act of violence. I also want them to develop confidence surrounding their personal style and aesthetic choices.

10. Keeping A Scale In The House

Unless you need one for genuine medical reasons that require the monitoring of one's weight, keeping a scale in the house is usually unnecessary. My parents’ scale, which was normally kept in our shared bathroom, fed into my compulsion of weight self-consciousness, since my lighter friends would compare their numbers to mine amusedly.

I would never want to help facilitate a body image-related or eating disorder, nor would I want to stress the importance of weight to my kid. Instead, I'd choose not to buy a scale and tell my kids that weight is just a number.

11. Teaching Them To Judge Their Reflection

Being honest about your own body positive journey can be a very healthy thing. Acknowledging certain insecurities when the moment calls for it and giving your kids a positive refrain will not only teach them to do the same, but also help them learn that it's OK not to feel body pos 24/7. However, too much harshness regarding bodily insecurities is often displayed to children by their parents, in my experience, thus encouraging them to dissect their own bodies.

Watching my mom tear herself down while looking in the mirror taught me to hate my own reflection. Hearing her lament about how "gross" certain parts of her body allegedly were taught me that it was normal to embrace such negative feelings about myself. Thus, avoiding this type of display will hopefully help your kids develop a much healthier relationship with the mirror and themselves early on.

Eradicating these practices, many of which are so culturally ingrained, can be difficult. But simply being aware of these body negative actions and how they might impact your kid can be the first step toward promoting healthy body image within your child.