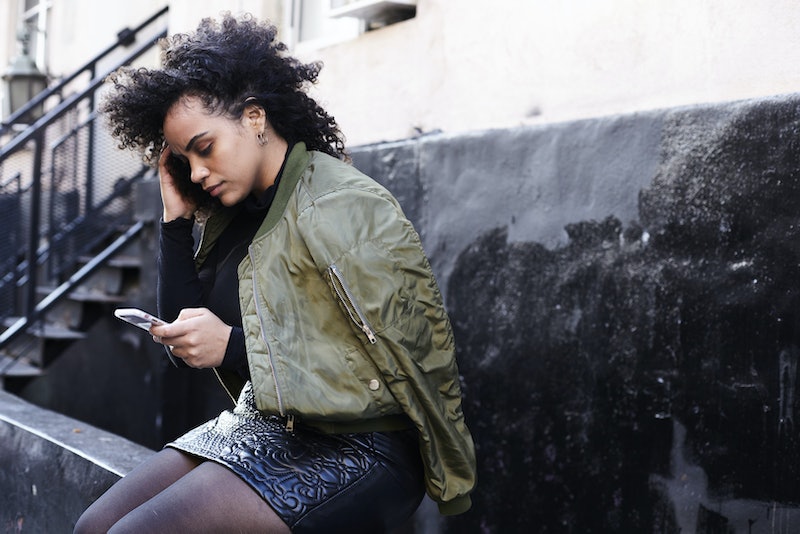 You’re probably familiar with ghosting in the dating world — when someone you’re seeing just disappears and gives no explanation. You may wonder: Weren’t we dating a minute ago? Weren’t things going well? Maybe he or she just lost their phone?! But ghosting happens among friends, too. You’re friends with someone one day — and they’re gone the next. Poof! Just like that.

I tend to give people the benefit of the doubt — everyone gets busy. But, then again, we make time for what, and who, is important. So, if you’re the one reaching out to the friend-in-question more than they are to you — most of the texts, emails, and phone calls are from you — you may want to chalk this up as being ghosted on. “What it comes down to is that we have made it incredibly easy to hide behind our phones or computer screens, and we can dehumanize the breakup,” Relationships Writer Justine Bylo tells Bustle.

I think this applies to platonic breakups, too — it’s so easy to end them these days without even formally ending them. No, “Sorry, I’m not feelin’ our friendship anymore. Good luck with everything. Cya (but not really).” Instead, people just play guessing games and assume if someone ignores them one too many times, that’s that. Silence is golden, right?

The Harvard Business Review did a study and found that only about half of friendships are reciprocal. So, maybe you thought someone was more your BFF than they did. As a result, when they disappear, they may not think it’s a big deal — you weren’t that close anyway — but it’s news to you. Ouch. “A relationship that was pretty insignificant to a person can take weeks to get over only because of the method of termination, not because the relationship itself was so fantastic and not even because the other person was very appealing,” Dr. Alice Sohn, clinical psychologist, tells Bustle. “But just because people can’t tolerate being left without explanation.”

I hear that. Here are five stages you’ll probably go through in the process — based on Elisabeth Kübler-Ross’ five stages of grief from her book On Death and Dying. Because if one thing’s for sure — whether it’s friendships or dating scenarios, ghosting, sadly, is a way of life these days.

So what if I’ve texted her 10 (or maybe 50) times in a row and haven’t heard back? NBD, right? Maybe she’s working late, her phone battery died, or she lost her phone.

Maybe if I like — no, love — all her Facebook or Insta posts, she’ll remember I exist and text me back?!

No, I wasn’t just looking at all our Facebook and Instagram pics together and all the fun times we had. No, those aren’t tears falling onto my laptop keys. Guess I’ll just never go out again and stay inside and be friendless forever.

Fine, if she doesn’t want to be friends anymore, I’ll focus on people who do , like other friends I have probably been neglecting because I’ve been so focused on just one.

All in all, being ghosted blows, whether it’s by someone you’re dating or by a friend. The grief and pain (and 101 questions — why, why, why?!) are inevitable, but you can help put a stop to it by not ghosting on someone either — instead, just tell them you’re not interested. Easier said than done, I know, but it can save everyone some time, plus help end this crazy ghosting phenomenon that’s all too popular these days.