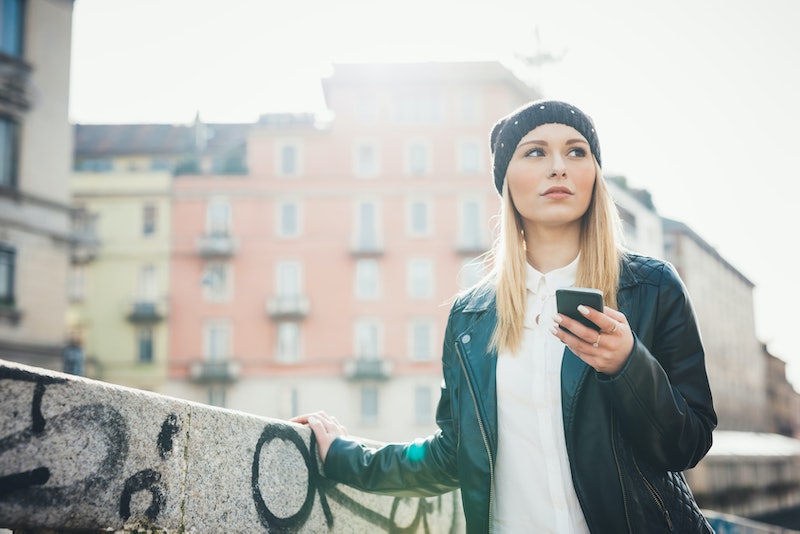 Dating habits vary person-to-person and probably differ as much as people’s political opinions, but a new survey from PlentyOfFish (POF) revealed Millennials’ dating habits. POF, which has over 100 million registered users and 4 million active daily users, surveyed over 800 of their Millennial singles between 18 and 33 years old from the United States and Canada, and some of the results were surprising. For instance, do most Millennials’ meet their dates online or through friends of friends? I’d guess online. And how long after a first date do they wait to contact someone for a second date? I know, the waiting game’s the worst. And if you’re just not feeling it, do you tell the person or do you just ghost? TBH, I think it’s best to be upfront and do the former, but the disappearing act seems to be more “in” than ever.

“10 to 15 years ago, the people we dated were part of our social circles, introduced to us by family or friends," Kate MacLean, Resident Dating Expert and PR Coordinator at PlentyOfFish, tells Bustle. "Online dating has provided a large pool of potential partners we may have never met otherwise. The extensive number of people we're able to meet now, paired with the convenience of hiding behind a device, and lower likelihood of running into someone after a breakup, are all points that we can attribute to the rising trend of ghosting in younger generations.”

Here are the Millennial dating trends that the POF research found. See if any surprise you as much as they surprised me.

1. Most Of Us Have Been Ghosted

By now, you know ghosting as the ever-popular verb in the dating world, but how many Millennials ghost? Too many, I think, according to POF’s study. Almost 80 percent of singles reported being dumped via the person they’re dating suddenly going MIA. Not cool. But I guess it’s the easy way out? Of course, we don’t know how many dates the person had with the ghoster, but still. It’s the principle, right? While some people like the concept of ghosting, others definitely do not.

“Rejection can be tough to swallow, but I think it provides a lot more clarity than the recent trend of ghosting,” says MacLean. “There is a level of respect that comes with dating and it is really important to take into account the vulnerability of the other person’s emotions. The act of ghosting provides absolutely no answers and you are left ultimately asking yourself what you may have said or done to ‘mess’ it up.” Yep. Couldn’t have said it better myself.

2. Most Of Us Text After The First Date

Texting is the most common way Millennials in the survey communicate after a first date, with the phone in second place (shocker!), followed by the dating app. Personally, I like to use the dating app after the first date — one perk is that it helps you keep track of people with their photos right there — or emails for longer communication. But, if you’re not going to go on the second date for a while, a phone call is nice to ensure that you and the person can converse well. After all, texting and messaging can never replace phone inflections and IRL communication, as you know.

I always think the sooner you hear from someone, the better, and find that some people ask for second dates IRL, too, at the end of the first date. This is great if you’re both into each other, but TOUGH if you’re not! Still, I’d rather hear from someone sooner rather than later, especially since you may have other dates lined up and, if you clicked with this person, you may want to see them again before meeting another stranger.

4. How Many Of Us Schedule Multiple Dates In One Day

The survey found that 14 percent of Millennials schedule more than one date per day or night. And do you blame them? Not all first dates lead to a second one, so why not set a time limit for Date #1, and then see Date #2 afterwards? While I would not do this, as what if you want to extend your date with Date #1, I see how it’s efficient for busy Millennials. And I guess there is something to leaving someone wanting more, i.e., to see you again.

5. Here's The Best Way To Meet Other Singles

Despite the popularity of online dating sites and apps, Millennials that were surveyed still believe friends of friends is the best way to meet a partner. I don’t blame them, but hope they still utilize all methods of dating—online and off — since it lets the Universe know you’re serious about meeting someone. Yes, that may sound crazy, but it’s true.

6. How Many Dating Apps Millennials Use At Once

Dating is a numbers game, right, so I say, the more apps, the better! I was surprised that about one-third of those surveyed are only on one app. Yes, you may see the same people on various apps — I saw my now-boyfriend on both Bumble and Happn — but you also see a lot of new people. And since most are free, there’s no reason not to download a bunch — as long as you’re good at balancing and messaging people, not just collecting matches or forgetting you’re on said apps.

7. Single Millennials Use Dating Apps For...

Society seems to think Millennials are the Netflix-and-Chill generation, but POF’s study found otherwise. Seventy-five percent of Millennials surveyed want to find a serious relationship from a dating app. That’s a lot of daters who want more than just a hookup. “I didn't expect this to be as high as it was — 75 percent of Millennial singles are currently using dating apps to find a serious relationship — debunking the dawn of the ‘dating apocalypse,’ that has been consistently written about and debated since the rise of mobile dating apps,” MacLean says.

8. How Often Millennials Log Into Their Dating Apps And Sites

Personally, I was surprised that only 11 percent log in five or more times per day. It seems that every time I am with friends, some check their dating apps obsessively. As for those surveyed who only check them 1-2 times a week, people may think you’re ghosting, so I’d log in more often if I were you. Just sayin’. If finding a boyfriend or girlfriend’s important to you, once a week doesn’t seem to cut it.

9. Most Of Us Have Been Online Dating For 5+ Years

You’re probably on a dating site or app yourself, or several, but how long have you been on them? Days? Months? Years? According to POF’s research, 50 percent of Millennial singles over the age of 24 have been dating online for five years or more. Perseverance is key, right? As someone who’s met boyfriends via sites and apps, and has plenty of friends who have married someone they met through them, it’s true!

In my years of dating online and on apps, NO ONE ever asked me to send a nude photo, but I hear horror stories a lot. POF’s study shows that it’s more common than I thought, with 41 percent of people being asked to send a photo. As for those who can’t remember, I would certainly remember if someone asked me to send one!