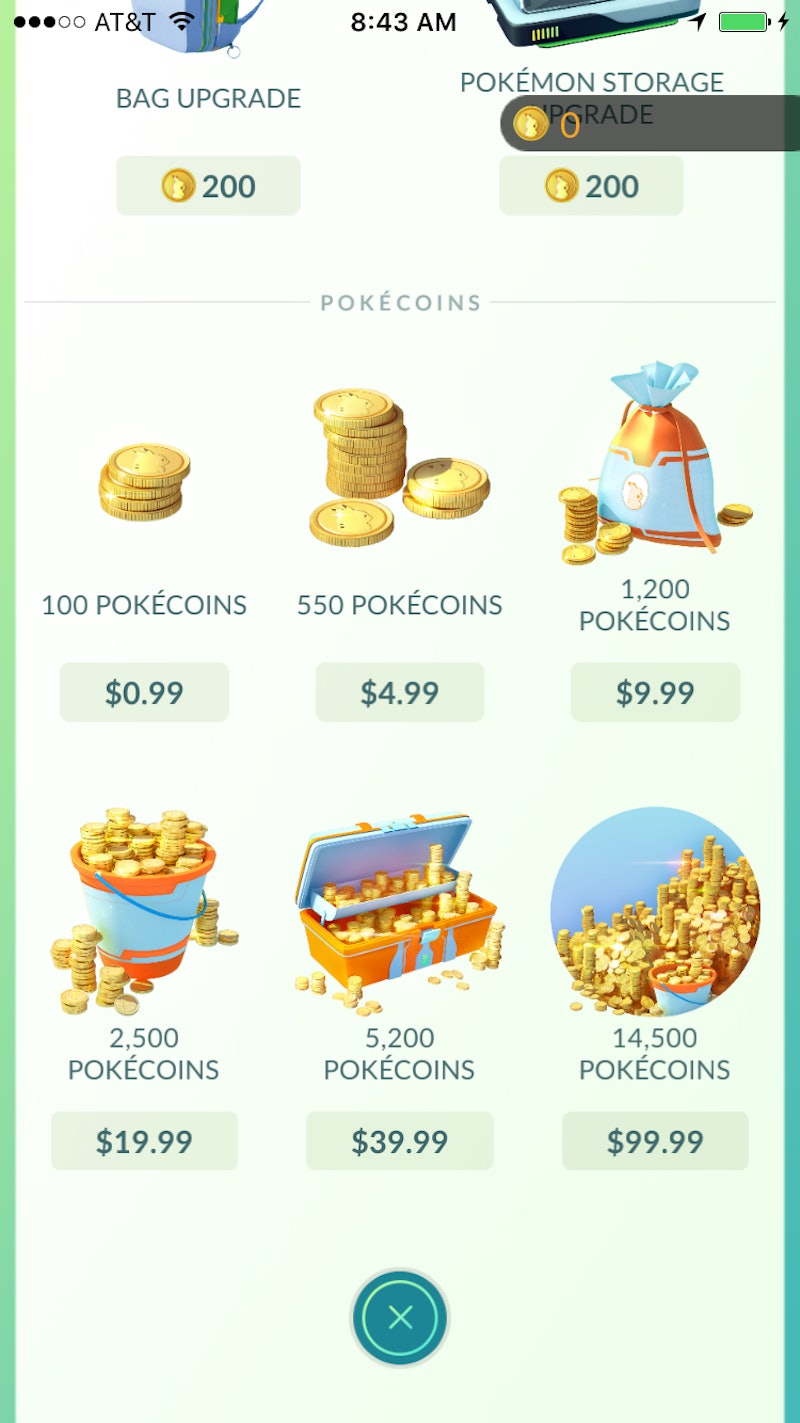 It’s no secret that although Pokémon Go is free to play, it also supports in-app purchases for gear meant to boost your game. Each item in the Pokémon Go shop is exchanged for Pokécoins, but in order to get Pokécoins in the first place, you have to spend actual money. So, how much is a Pokécoin worth in Pokémon Go, exactly? If you want to purchase, say, a Lure Module, how much of your real, hard-earned cash can you expect to shell out? The economics of the game do kind of matter, so for the curious, I did a little digging. Here’s what I found out.

The good news is that the math isn’t that difficult to work out, even for a generally non-mathy person like myself; indeed, you don’t even really need to do much math at all in order to estimate a rough baseline, thanks to the fact that the smallest number of Pokécoins available for purchase involves incredibly convenient numbers: 100 Pokécoins costs 99 cents in actual U.S. currency, which rounds to about 1 cent per Pokécoin. So, if you spend 100 Pokécoins on a single Lure Module, you’re spending about $1.

But do you get a discount for buying coins in larger amounts? Well... kind of. Technically, yes, the larger amounts of Pokécoins work out to slightly less than if you were to buy just 100 at a time, but the prices still round up to just about 1 cent per coin. For the curious, here’s the complete list of the amounts of Pokécoins you can buy in the Pokémon Go shop and how much they cost in real life; I’ve also attempted to figure out exactly how much it comes out to per coin in each case, although disclaimer, it’s possible my math is wrong. (I’m obviously hoping it’s not, but, well, just putting that out there.)

If we go by the normal rule of rounding up for numbers five and above, voila: 1 cent per coin, no matter what package you purchase. Also, if you have the ability to spend $99.99 on Pokécoins without a second thought, I want your life.

Not to get too deep on you, but the economics of Pokécoins is sort of an interesting microcosm of our world's broken economic system in real life — that is, it shows that it’s expensive to be poor. The cost per Lure Module in an eight-pack is less overall if you’re able to buy almost $10 worth of Pokécoins right off the bat — but if you only have enough cash available to buy $7 worth of Pokécoins at that particular moment, the cost per Lure Module is a lot higher. Now make those numbers bigger, and substitute out “Lure Module” for something like food or rent, and, well… you get the idea.

In any event, the short answer to “how much is a Pokécoin worth?” is about 1 cent — and, of course, it’s definitely possible to play the game without spending anything at all. Whatever strategy works for you, go forth and do it. Happy hunting!